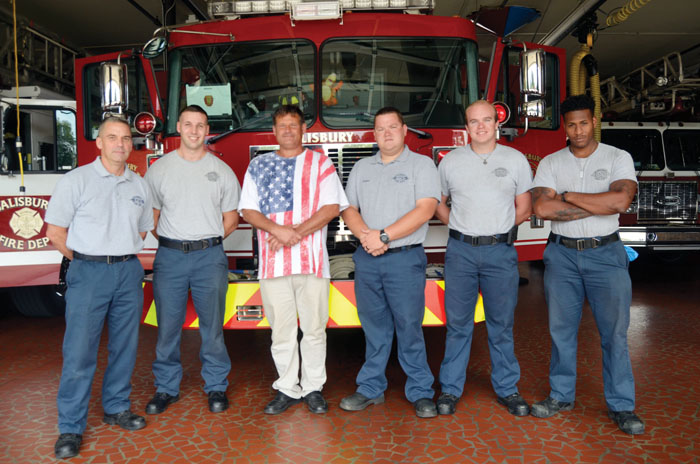 John Smith, center, has traveled across the state to meet and greet fire personnel and law enforcement to thank them for their service. He's shown here with members of the Salisbury Fire Department, from left Don Clark, Tony Amenta, Josh Beard, Chris Renfrow and Michael Freeman. Shavonne Walker/Salisbury Post

The Florida native paused in Salisbury on Thursday during his trek across North Carolina, the last in a long line of towns and states he’s visited. Everywhere he goes, Smith, 49, stops to greet local veterans and police, fire and EMS departments to thank them for their service.

“I’m just trying to make the world a better place,” he said.

Smith grew up in small fishing town Old Homosassa, Fla., and spent most of his career life captaining fishing boats. His story has several starting points, but perhaps the first is the birth of his faith, which Smith said began when he set out to write a book proving that Jesus was “a fairytale.”

“And he done it exactly the opposite. He proved that he was real. …That’s why my faith is so strong,” he said.

Later, Smith suffered from a medical issue, where the cartilage in his knee was worn away. But Smith said that God healed him — and his mother, who suffered from clogged arteries resulting in heart attacks and strokes. When Smith realized he could walk again without pain, he decided to dedicate the ability to God.

“He healed my knee for a reason,” he said.

Smith began a walk across his home state, calling the trek a “walk for God.” And he made the entire journey on faith alone — not taking money, a backpack or supplies.

“I didn’t take nothing but a set of clothes and left my house,” he said.

But he never lacked food, clean clothing or a place to sleep. On his journey, strangers gave him food and shelter, or a new set of clothes exactly when he needed it. He’s never lacked for anything, he said.

Smith’s mission changed on July 7, 2016. He’d made his way to Texas, and found himself just a few blocks from a deadly ambush and shooting that left five Dallas police officers dead at a protest.

“It happened like a mile from me,” he said.

Smith still cries when he remembers that day.

“It just affected me so much just that, you know, these senseless killings are going on for no reason. It’s tearing the country apart, and I just want to do something to make it better,” he said.

So he started walking, making his way across Texas and neighboring states, and stopping to thank law enforcement and first responders wherever he goes. He tries to spread awareness of the jobs’ difficulties, pay and dedication, as well, using social media and the hashtag #walkforgodworld.

“I just take my time and go from town to town,” he said.

But it hasn’t been easy. Looking back over his months and months of travel, Smith said that the hardest part of the journey was when he walked across Texas. The heat was unbearable, and the distance between towns was long. Smith walked each day with cloth wrapped around his head like a turban, and carried an umbrella to shield him from the sun.

“It was almost I couldn’t take it,” he remembers.

But he had food, water and shelter when he needed it, he said. People would drive up to him, stop their cars, and offer a bag of food. Many told him they felt they’d been prompted by God to do so.

“God was with me,” Smith said. “He was with me every step of the way.”

N.C. is the third state Smith has walked in a row. Smith paused in Salisbury on his way from Greensboro to Charlotte, and said the walk from Guilford County took him three days.

“It’s been a hot walk,” he said with a chuckle.

As he stopped to rest his feet, Smith talked about his plans for the future. Once he reaches Charlotte, he’ll return to his home in Crystal River, Fla., to rest for a month. Then he plans to walk across him home state once more, this time for disaster relief.

“I think that’s what I need to do for my own state for what’s happened,” he said.

Smith also wants to start a church and a non-profit organization which would benefit first responders.

“We all gotta do our part to make the world a better place,” he said.

For Smith, that means putting one foot in front of the other.