‘Listen to your body’ — Heather St. Aubin-Stout is a two-time breast cancer survivor 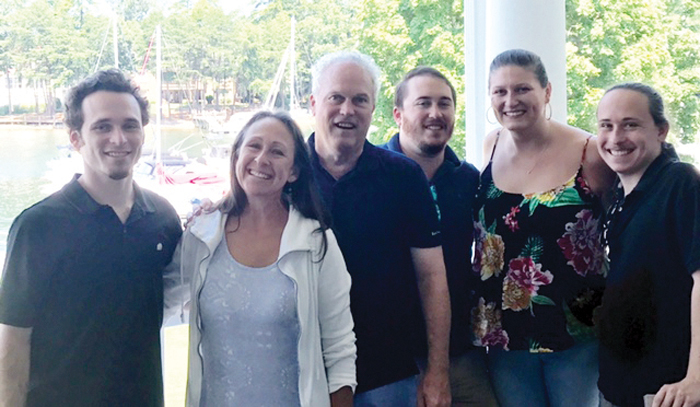 Heather Stout with her husband, Gray, and their sons.

It wasn’t supposed to happen.

Heather St. Aubin-Stout is a two-time breast cancer survivor who’s been cancer-free for a decade. When horrific back pain landed her in a Charlotte ER at the end of August, she thought she had a herniated disc. Instead, she was blindsided when doctors diagnosed her with breast cancer that metastasized to the bone. Her first breast cancer was estrogen-positive. So is this.

“It had a sneaky piece to it that snuck out when I went on my merry way,” says Heather, now 54. “Sadly, I’m living proof there’s a chance you deal with it down the road.”

“You know when God nudges you?” says Heather, a devout Catholic. “I’ve had nudges since February. But my cancer was so long ago, and I was so healthy. I just explained it away.”

When Heather was doing strength training, she had a pain in her side. She stopped lifting weights, and took a muscle relaxant prescribed by her primary-care physician. She saw an oncologist, then planned to get an MRI — which she later canceled because it was out of network.

“I blew it off,” Heather says. “It gradually got better and I didn’t follow up. I thought it was a pulled muscle. I thought it was because I was working out, and I was getting older — this type of thinking. Which is bad. Obviously, it’s a slow-growing cancer. They think it’s been there 10 years.”

Heather took 10 radiation treatments to address the pain. Then she started hormone suppressant therapy and targeted cell therapy. She won’t be taking systemic chemotherapy. The hope is that the two drugs she’s taking, along with bone injection shots, will eventually send the disease into remission. There is no cure. In November, Heather will enter an integrative medicine program that combines holistic therapy, nutrition, exercise and Vitamin B and calcium supplements.

“I just need to learn to be easy on myself and go slow,” Heather says. “I like to go full throttle.”

She can no longer do housework and heavy lifting, but she can still prepare meals.

“I can stand up and chop food and make a meal,” she says. “That’s really satisfying. It’s nice to have a task at hand to do.”

She and her husband, Gray, who’s an architect  — that’s Heather’s training, too — are getting ready to celebrate their 30th anniversary.

“A cancer diagnosis affects everybody in the family,” she says. “Not to brag, but Gray has been a rock star. He’s taken time off. He’s worked from the hospital. He’s been with me every step of the way. He’s really been wonderful. I can’t tell you all of the blessings I’ve gotten from this diagnosis.”

The day she got the diagnosis, Gray, their three sons, a girlfriend, and her two sisters and brothers-in-law came to the hospital. Her father later drove down from Michigan, and her mother-in-law brought enough food from Salisbury to feed the whole neighborhood.

“I just was blown away because everybody is so busy,” Heather says.

She applauds their sons, Nate, Ryan, and Nick, for being so helpful and mature this time around. And friends have also reached out, just like before.

“I laugh about my big mouth, but people really do care,” she says. “People think they can do it all themselves and you just can’t. This is really what this world’s about.”

“Even though we’ve been in Charlotte for two years, we’re still connected as a church family,” Heather says. “That’s just so powerful.”

One person who has reached out is Mary Knapp, a longtime friend from Sacred Heart. She’s a fellow breast cancer survivor who was diagnosed with bone cancer in November 2015.

“I’m feeling well and doing a lot of the things I always did,” says Mary, who works diligently with Relay for Life. Mary had pain in her back after doing some lifting, and a bone scan revealed her cancer.

“I’m taking hormone suppressant shots that should slowly and hopefully surely take it into remission,” she says.

In Mary, Heather has someone who understands her diagnosis.

“I’m gonna be around for a couple more years,” says Mary, who just turned 70. “It was a big deal for me because my parents did not live that long. It was extra joyful. Now I’m hoping for 80.”

Jill echoes Heather’s words about being vigilant — whether or not you are a cancer survivor.

“It is up to us, as women, to listen to the signals in our bodies,” Jill says. She advocates for mammograms for women over 40, as well as annual pap smears and colonoscopies for women over 50.

“Are they perfect?” she asks of these screenings. “No, but they are a snapshot in time. But again, no provider is going to know our body as well as we do.”

Jill says it’s a challenge for breast cancer survivors, because after treatment ends, they may worry about every ache and pain.

“Then you get to a point where you think, ‘Now I’m good. I’m healed. I’m healthy.’ But when you have an ache or pain, you need to do all the things you know to do first — rest, applying heat, taking anti-inflammatory medicine. Then if that doesn’t help, you need to see your doctor. Women will notoriously put things off. We have busy lives, but you can’t ever let your guard down. Listen to your body.”

Jill says that funds are available to pay for mammograms for women who are underinsured or uninsured. If you cannot afford a mammogram, call her at 704-210-6927.

Early detection equals a cure, Jill says. And if you develop cancer once, there’s a higher risk for recurrence. “But listen to your body, get all the required screenings, have regular discussions with your physician, and live your life happy.”

Heather is living her life happy. She compares her latest diagnosis to diabetes — something she’ll have to monitor for the rest of her life. Early last week, she had a baseline EKG. She’ll also have monthly blood work and bone scans every three months to determine whether the current treatment regimen is working.

The scans are $8,000 each, and should be covered after Heather meets an $8,000 deductible. Of course, deductibles reset each year.

“I’m gonna have to start saving my pennies, because this is a lifetime thing,” she says.

With her sisters’ encouragement, she’s set up a GoFundMe page to help with medical expenses (www.gofundme.com/g49s5-medical-fund). She’s been out of work since her diagnosis. She was hostessing at a high-end Thai restaurant, and helping one of her sisters with her pet sitting business. In Salisbury, she was a hostess at Emma’s.

With a stage 4 diagnosis, Heather knows she’ll eventually die from the disease.

“But I’m hopeful for a cure,” she says. “I put a positive spin on it, and that’s what works for me. We’re all dealing with something. I want to make the most of what I have.”

She’s praying diligently for others, and keeps “on track” by posting inspirational quotations on her personal facebook page (Heather St Aubin Stout). She posts medical updates on the page she created after writing a memoir about breast cancer (Not My Mother’s Journey). She’s also helping defray medical expenses by selling signed copies of her memoir. She’ll also be donating to METAvivor, a group that funds research to stage 4 metastatic breast cancer.

And she hopes to return to work when she is able.

“I’m thinking I’m gonna get back there,” she says.