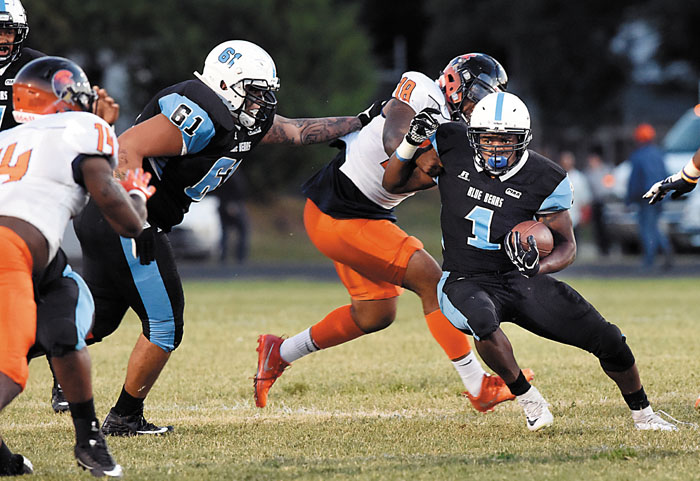 SALISBURY —It’s two games into the conference season and Livingstone’s football team has some catching up to do.

The winless Blue Bears continued to veer off course Saturday night at Alumni Memorial Stadium, where visiting Virginia State swooped down and confiscated a 56-18 victory.

“They were who we thought they were,” subdued coach Daryl Williams said after Livingstone (0-5, 0-2 CIAA) yielded seven touchdowns, a field goal and a pair of second-half safeties. “I thought we would tackle much better than we did. On offense, we always seemed to be in bad field position and didn’t get a push off the line when we needed it. But everything I saw tonight, I think is fixable.”

LC’s battle-weary defense had an especially difficult game. VSU (4-0, 2-0) racked up 424 yards total offense and scored on six of its first seven possessions, rolling to a 38-6 halftime lead.

“Too many blown assignments,” senior defensive end Armond Cox explained. “Too many times we had people over-pursuing, getting too nosey or not paying attention. We spent too much time trying to get the killer shot, the big hit. That’s not executing your defense.”

It all went exactly as planned for the Trojans, winners of 11 straight games against LC. The guests rode the accurate arms of starting quarterback Cordelral Cook and reliever Niko Johnson — underclassmen who combined for 284 yards passing and four TD’s. Each threw 50-yard scoring passes to elusive receiver Zachary Parker. Also damaging was the work of senior running back Trenton Cannon — last week’s CIAA Offensive Back of the Week after rushing for 155 yards against defending league champion Winston-Salem State. Against the Blue Bears he was limited to 87 yards on 13 carries, but scored on a 38-yard romp that widened the lead to 47-6 early in the third period.

“He’s an NFL back who will get the opportunity to play on the next level,” said winning coach Reggie Barlow. “He’s that good.”

Cannon was even better in the second quarter. Livingstone quarterback Xavier Longerbeam had just thrown a picturesque, 42-yard touchdown pass to wideout Andrew Gamble, a play that momentarily stopped the bleeding and drew LC within 24-6 with 3:30 remaining in the half. But the ensuing kickoff extinguished any Livingstone momentum when Cannon made almost-balletic use of both sidelines while zig-zagging his way for an 85-yard TD return. On the LC sideline, Williams was visibly upset.

“That’s the most disturbing part about it,” Williams said. “We practice special teams every day and had just scored. But I dare not say what happened without looking at the film.”

Fair enough. On a night when Virginia State could do no wrong, Livingstone’s defense and special teams couldn’t make it right.

“I don’t know, (Cannon) is a good back but he’s stoppable,” Livingstone linebacker Jarod Richardson said after making eight tackles. “Most of it was our own fault. It wasn’t so much them as it was us.”

Cox agreed. “To be honest, (Cannon) is about the same story he was last year (in a 47-0 VSU victory),” he said. “The kick return was big, but against the defense he wasn’t the threat people made him out to be.”

The Blue Bears were their own worst enemy. The game got as ugly as 56-6 when Johnson was flushed out of the pocket and and scrambled toward the sideline — then fired an on-the-run, 34-yard touchdown pass to Kier Townsend with 3:19 to play in the third quarter.

“You see the play happening right in front of you,” Richardson said. “But we’re moving way too fast. We’ve got to slow the game down on plays like that.”

Longerbeam was Livingstone’s lone bright spot. He’s been nursing a shoulder injury and wasn’t in the starting lineup, but spelled junior Trey Willis midway through the second quarter and passed for 197 yards and two touchdowns.

“Longerbeam didn’t finish the game last week because his shoulder kept popping out,” Williams said. “He didn’t start because he hasn’t practiced much. But he came in and played well.”

Livingstone finished on a positive note, scoring the game’s last two touchdowns. It was late in the third period when Longerbeam threaded a 12-yard TD pass to Spencer Ludin. Then with just 3:19 to play he adjusted to a pass rush and sprinted 20 yards for his first rushing touchdown of the season.

“It was a pass play but the linebacker blitzed,” he said afterward. “I was able to make him miss, then saw a lot of green and took it.”

On this night it was simply too little, too late. “What we need to do,” he adding before leaving the field, “is take the coaching and apply it to the game.”

Only then will the Blue Bears make a much-needed U-turn.

“We know what we’ve got to do,” Williams said. “We’ve got to tackle better and block better. We’ll get it corrected.”