Four in a row for the Wolfpack 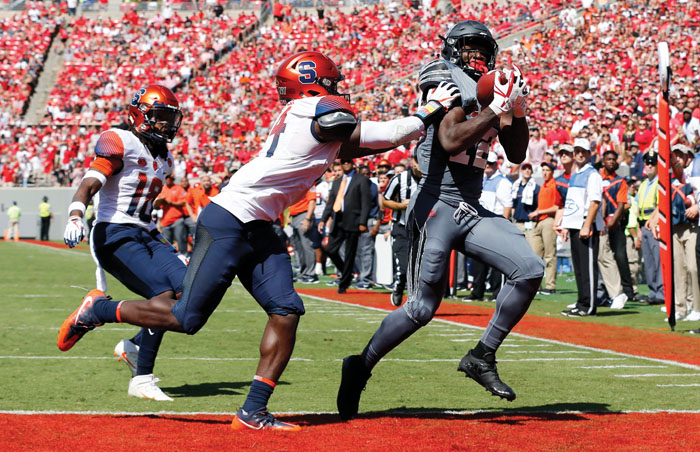 RALEIGH (AP) — North Carolina State focused all week on avoiding a letdown after its upset win at then-No. 12 Florida State a week ago.

With failures of the recent past in their minds, the Wolfpack started fast to make sure there would be no such disappointment this year.

Nyheim Hines rushed for 115 yards and a touchdown, Jaylen Samuels and Reggie Gallaspy each ran for a score as well, and N.C. State held off a late rally to beat Syracuse 33-25 on Saturday afternoon.

The Wolfpack (4-1, 2-0 ACC) racked up 256 rushing yards and never trailed en route to their fourth consecutive win. They began conference play 2-0 for the first time since 2006 with the victory.

“We’re trying to build a legacy,” Hines said. “We’re the first (N.C. State) team to go 2-0 in the ACC in 11 years. That was a point of emphasis..The team that beat Florida State last time lost the next week, so really it’s about not repeating history and living a legacy of our own.”

Ryan Finley completed 20 of 33 passes for 186 yards and threw a 20-yard touchdown to Stephen Louis. Samuels racked up 111 total yards, 74 rushing and 37 receiving.

Eric Dungey tried to rally Syracuse back with a touchdown pass and two-point conversion run to make it a 33-25 game with 4:39 to go, but it was too little, too late. N.C. State’s Cole Cook recovered the Orange’s onside kick attempt and the Wolfpack ran out the clock, including a key 4th-and-1 conversion on a quarterback sneak by Finley.

“We’ve got to find a way to start faster,” Syracuse coach Dino Babers said. “You can’t spot (teams) leads like that and then expect to run them back down in their venues with their crowds behind them.”

Dungey passed for 385 yards and ran for 44 yards and two scores for the Orange. Ervin Philips made 17 catches for 188 yards, both career-highs, and Steve Ishmael made six catches for 120 yards and a touchdown.

Syracuse hampered itself with 12 penalties for 93 yards. The Orange offensive line had a long day as well, allowing three sacks and nine tackles for a loss.

SYRACUSE: The Orange continue to struggle to get stops defensively. They have allowed 29 points per game against FBS foes this year, including 30-plus points in back-to-back weeks.

N.C. State: This year’s Wolfpack continue to show they may be different than their predecessors, who made a frequent habit of letdowns and close, late losses.

“We’re a lot more mature than we have been in the past,” senior defensive end Bradley Chubb said. “A lot of guys in the past would’ve been like ‘Oh we beat the No. 12 team so we don’t have to come out as hard this week.’ We just all executed exactly what we needed to do.”

N.C. State didn’t commit a turnover for the fourth consecutive game. Finley ran his streak of consecutive attempts without an interception to 257, the longest active streak in the nation.

“If you hold the ball for 38 minutes, you should win,” Johnson said.

Georgia Tech played keep-away against North Carolina, dominating the clock with its ball-control offense, and KirVonte Benson scored on a 63-yard run as the Yellow Jackets beat the Tar Heels 33-7 on Saturday.

Georgia Tech held the ball almost twice as long as the Tar Heels. The Yellow Jackets pulled away after leading only 10-0 at halftime.

North Carolina avoided being shut out when Jordon Brown scored on an 8-yard run with 5:05 remaining. The touchdown was set up by Chazz Surratt’s 34-yard pass to Jordan Cunningham.

WINSTON-SALEM (AP) — Florida State’s young quarterback had struggled much of the day. And the winless Seminoles — dinged up with injuries and struggling to keep Wake Forest’s defensive front out of the backfield — were on the edge of adding to a month’s worth of misery.

Instead, they finally figured a way out.

It wasn’t a performance in line with the preseason expectations that had FSU starting the year as the nation’s No. 3-ranked team and the Atlantic Coast Conference favorite. FSU coach Jimbo Fisher didn’t care, either, calling it “just the next step” for a team that desperately needed to take one.

Blackman — the freshman pressed into a starting role due to injury earlier this year — had thrown for just 81 yards entering that final drive for the Seminoles (1-2, 1-1 ACC). But after the FSU defense forced a three-and-out, Blackman was perfect with the downfield shot to Tate — who caught the ball despite a pass-interference penalty by defender Amari Henderson as well as a shoulder injury that had Tate in and out of the lineup.

Wake Forest (4-1, 1-1) had a final chance to tie, but John Wolford’s desperation heave to the end zone for Scotty Washington fell incomplete to end it.

The Panthers (3-1, 2-0 Conference USA) were forced to relocate their original, September 8 home opener with Alcorn State to Birmingham, Alabama because of the hurricane.

McGough started the comeback by hitting Thomas Owens from six yards out to make it 26-14 at intermission. He scored from 8-yards out in the third quarter to make it 29-21 and scored on a 14-yard run to make it 29-27 after the Panther’s’ two-point conversion failed.

McGough then engineered a six-play, 59-yard drive to set up Jose Borregales’ 27-yard field goal with 7:22 left to secure the win.

ELON (AP) — Tyler Campbell intercepted two passes and Elon posted its first shutout since 2009 with a 6-0 victory over Albany on Saturday.

Elon (4-1, 2-0 Colonial Athletic Conference), which entered allowing a CAA-worst 32 points per game, recovered two fumbles along with the two picks.

Malcolm Summers, one week after rushing for a career-high 294 yards in a win over Richmond, ran for 171 yards on 39 carries for the Phoenix. It was his third straight game with 170-plus yards.

Albany (3-2, 1-1) starter Will Brunson was replaced by Neven Sussman on the final drive and drove the Great Danes to the Elon 26. But his pass to the goal line on the final play was broken up by Greg Liggs Jr. and Daniel Reid-Bennett.

North Carolina A&T now has won three straight over the Bulldogs, who had won the previous 10 straight meetings.

Noel Ruiz kicked a 36-yard field goal to get the Aggies (5-0, 2-0) on the board and added field goals from 41- and 27-yards out, but missed a PAT on North Carolina A&T’s first touchdown, a 14-yard pass from Raynard to Malik Wilson in the second quarter.

Raynard added a 71-yard touchdown pass to Xavier Griffin in the third quarter and completed 18 of 31 passes for 298 yards, with one interception.

Dewann Ford hit Trey Samuel with a 33-yard touchdown pass to get South Carolina State (1-3, 0-2) on the board in the fourth quarter and avoid the shutout.

CHATTANOOGA, Tenn. (AP) — Corey Holloway ran for 105 yards and two touchdowns to lead Western Carolina to a 45-7 rout of Chattanooga on Saturday night.

Nick Tiano, the Mocs’ quarterback, fumbled the ball twice in his own end zone in the second quarter.  A.J. Newman recovered the ball the first time and forced the second fumble, which was recovered by Nate Link, and Western Carolina led 24-0 at halftime.

Holloway scored both touchdowns from the 1-yard line. Tyrie Adams threw a 38-yard touchdown pass to Steffon Hill that made it 38-0.

COLLEGE STATION, Texas (AP) — Keith Ford ran for 70 yards and two touchdowns, including the go-ahead 17-yard score in the fourth quarter, to lift Texas A&M to a 24-17 win over South Carolina on Saturday night.

Freshman Kellen Mond threw for 159 yards and ran for 95 to help the Aggies (4-1, 2-0 Southeastern Conference) rally for the victory.

Texas A&M trailed by a touchdown entering the fourth quarter before Ford tied it up with a 7-yard run.

Mond looked to have scored two plays earlier, but Camron Buckley delivered a helmet-to-helmet hit while blocking on the play and it was called back. Buckley, who was called for a holding penalty earlier in the drive, was ejected for targeting after the play was reviewed.

Otaro Alaka sacked Jake Bentley on third down on South Carolina’s next drive to force a punt.

Ford put the Aggies on top on their ensuing possession when he dragged three defenders into the end zone for that 17-yard touchdown, which made it 24-17.

Bentley was sacked twice on South Carolina’s next drive and the Aggies got the ball back and they used run after run to get the clock down to less than two minutes.

Bentley threw for 256 yards and two touchdowns for South Carolina (3-2, 1-2), but he was sacked seven times behind a line that often didn’t give him enough time to make plays.

Alaka led the way on defense for the Aggies, finishing with nine tackles, including five for losses and two sacks.

Bentley pushed South Carolina’s lead to 17-7 when he connected with OrTre Smith on a 13-yard touchdown pass with about nine minutes left in the third quarter.

The Gamecocks took a 10-7 lead on a 29-yard field goal by Parker White with about nine minutes left in the first half.

They had a chance to add to their lead when they were driving inside the 10-yard line late in the second quarter, but Bentley was sacked by Landis Durham, who caused a fumble which the Aggies recovered to end the drive.

South Carolina had a shot to take an early lead after recovering the ball after Christian Kirk fumbled a punt in the first quarter. But White’s 46-yard field goal attempt sailed wide left.

South Carolina receiver Terry Googer was carted off the field on a stretcher after a hit on a punt. But school officials said he was moving all of his extremities after arriving at the hospital and coach Will Muschamp said on the television broadcast at halftime that he was OK.

SOUTH CAROLINA: Bentley showed the ability to make throws when he had time on Saturday night. But the Gamecocks will need to protect him better for him to be successful as they continue SEC play.

TEXAS A&M: Mond took another step forward, but will have to make another jump next week if the Aggies hope to compete with the top-ranked Crimson Tide.