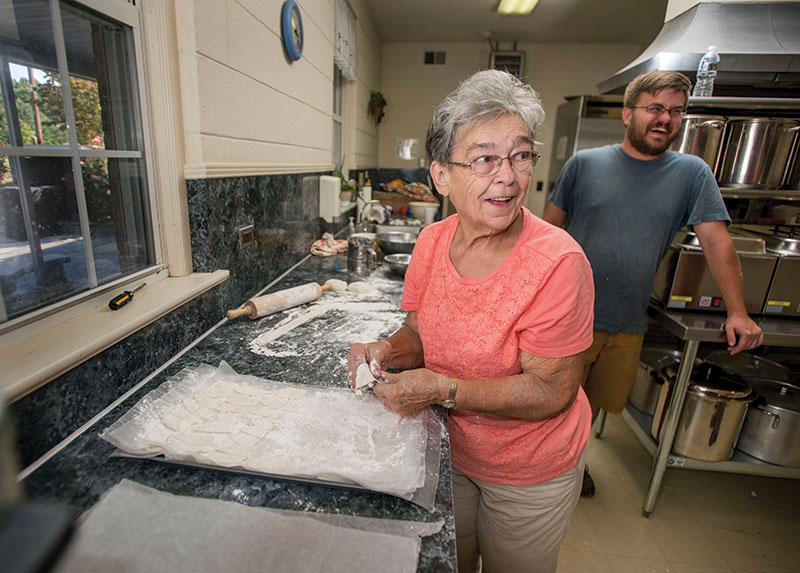 JON C. LAKEY / SALISBURY POST Linda Kepley works away in the kitchen of Grace Lower Stone Reformed Church in Rockwell making the dumplings for her well-known chicken-n-dumplings. Kepley's chicken-n-dumplings will be served at a fundraiser for the China Grove Roller Mill on Saturday October 7th. Aaron Kepley , Rowan Museum Excutive Director , is on the right. Thursday, September 28, 2017, in Rockwell , N.C.

ROCKWELL — Linda Kepley has a no-nonsense demeanor in the kitchen. When you introduce yourself and ask how she’s doing, she replies, “Mean as ever.”

But don’t fall for it. Linda drove a school bus for close to 25 years and treated her kid passengers like a loving mother.

Her family always has Sunday dinner at her house, because the rest of the week goes better when you start with Linda’s cooking.

And when Grace Lower Stone Church has a big event, like its annual bazaar Oct. 14, Linda Kepley takes over in the church kitchen, leading the effort to make chicken and noodles for which people wait in lines.

Just this past week, tables in the fellowship hall were being used to dry and cut 240 pounds of noodles that when served at the bazaar last only about three hours. Linda worked 13 hours on both Monday and Tuesday to make those noodles

But Linda Kepley’s greatest specialty might be her chicken and dumplings — something she often makes for her family’s Sunday dinners.

Aaron, executive director of Rowan Museum Inc., knew he had a secret weapon when he asked his grandmother to make her chicken and dumplings for a fundraiser this coming Saturday (Oct. 7) at the China Grove Roller Mill.

Linda agreed, and she has made 10 “batches,” which when combined with the chickens will provide about 150 servings at the roller mill, now a property of Rowan Museum.

Aaron says people might want to come early for “Chicken & Pickin” at the roller mill, because his grandmother’s chicken and dumplings could go fast. She also has made 8.5 gallons of German slaw for the event, which goes from 5-7 p.m. at the historic roller mill, 308 N. Main St., China Grove.

The evening includes music by MGM, comprised of Mary Gillespie and Graham Carlton on guitar and vocals, Melissa B. Adams on fiddle and Mark Jennings on bass.

Aaron Kepley says he knows part of it is probably the sentiment he attaches to his grandmother, but “I’ve had other people’s chicken and dumplings, and they just don’t taste the same.”

In the finest of German traditions, the recipe for Linda’s chicken and dumplings was handed down to her. The exact combination of ingredients she uses will remain a secret, but the dumplings depend, of course, on eggs, enriched white flour, water and chicken broth.

“I had a lady this morning ask, ‘Are you going to take that recipe to the grave with you?’ And I said, ‘I might,'” Linda says.

Her best advice is to roll the dough out thin so it bakes faster. She uses a knife, not a pizza cutter, to make her strips in the dough. She then uses her fingers to pinch off dumplings from those strips and positions them on floured trays.

“Different people do things different ways,” Linda says. “Usually, I can do a batch in about 30 minutes. Sometimes I have round ones, and sometimes I have square ones.”

She’s covered in flour in no time, and church members can tell when Linda has been making dumplings and noodles by the trail of white going from the back kitchen door to the parking lot.

“If there’s anyone at Grace Lower Stone Church to do it,” the Rev. Jay Whitley, retired pastor, says, “she’s the one.”

Is the way she makes chicken and dumplings something she learned from her mother?

“Aunt Carrie, her sister, taught me how to do these,” Linda says. “And her daughters don’t even have a recipe.”

Linda figures she has been making them about 40 years.

In preparing the dumplings that will be going to the roller mill, Linda started working at 4 a.m.

Aaron says it’s interesting to him that the white flour his grandmother relies on wasn’t possible until roller mills like the one in China Grove came along.

On Saturday, Linda will do all her cooking at the church, and the chicken and dumplings will be transported to the roller mill in a heavily insulated cooler. Tammy and Leslie, her daughters-in-law, will be helping Linda at the church.

“I told Aaron, ‘I don’t know what you’re getting me into,'” Linda says.

The mother of five, grandmother of nine and great-grandmother of two considers her dumplings a fall-winter type of food. She used to make them for many years for the Rockwell Rural Fire Department.

At the church, she also is known for her biscuits, which are made with love, not meanness.