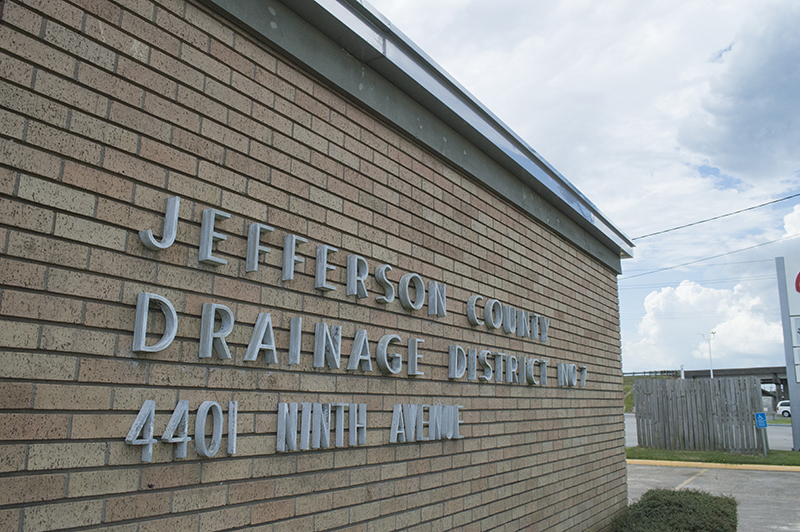 Josh Bergeron / Port Arthur News - Jefferson County's Drainage District No. 7's pump station worked until one ran out of gas during Tropical Storm Harvey. The district's operations during the storm, however, have come under scrutiny because of massive flooding across the area.

As Tropical Storm Harvey’s floodwaters rose, the largest pump station in Drainage District 7, tasked with controlling flooding for more than 100 acres in Jefferson County, Texas, began to take on water.

Knowing the consequences of water rising further, DD7 staff maneuvered a submersible pump into the flooded area to move water out of the station.

“Had we not been able to get that water out, we would have jeopardized losing the whole station,” Kelley said.

With one exception, pumps operated continuously as rain fell across DD7. On Aug. 28, staff filled diesel fuel tanks at every site. By the afternoon of Aug. 30, fuel levels began to run low. That evening, the Crane Bayou station completely emptied its tanks and stopped pumping water, Kelley said.

When Harvey’s floodwater receded, locals began to question operations of DD7 during the storm. Local residents questioned whether pumps and other infrastructure moved water fast enough, how a pump running out of fuel affected flood levels and if DD7 staff performed proper maintenance. Meanwhile, law firm Reaud, Morgan and Quinn — based in nearby Beaumont, Texas — has raised the specter of a class action lawsuit, and its recent public meetings have attracted hundreds of people.

Residents say they hope to find closure for a storm that upended lives, flooded homes and business and left others wondering if life will return to normal. The drainage district finds itself examining which improvements are financially feasible.

Jeff East, a surface water specialist at the Texas Water Science Center, said he’s not aware of any drainage system that could perfectly handle flooding caused by Harvey. In a period of several days, the storm dumped enough rain to top yearly precipitation averages in an area that’s relatively flat and close to sea level, East said.

“It would be a significant engineering challenge to design a well-functioning, cost-effective drainage system that could handle that amount of rain,” he said.

Ambre Bushong, who lived near the Jack Brooks Regional Airport, said she understands that Harvey dropped historic amounts of rain — one gauge measured nearly 65 inches near her house — but questions how her neighborhood saw major flooding.

The neighborhood, Dominion Ranch, borders a drainage canal, but it also sits at a higher elevation than other areas of Port Arthur. The adjacent airport saw little, if any, flooding. Meanwhile, Bushong said water began to build up in her neighborhood several days before the worst rain bands from the storm.

Bushong said she and her husband Aldo Chavera Jr. didn’t purchase flood insurance because they were not in a flood zone and many people advised them not to.

“Probably like three people in our entire neighborhood had insurance,” she said.

“The water would come up, but after it stopped raining for a while it would go down,” he said.

As an example, he said the neighborhood was flooded for most of the day on Aug. 28. By that afternoon, water had completely receded. On the morning of Aug. 29, floodwater rose higher than ever before, he said. When rain stopped, water didn’t recede. Floodwater inundated the neighborhood.

Bushong says she’s not sure whether a class-action lawsuit against DD7 is worth joining. Corley said he may participate. Plaintiffs in the lawsuit could receive a financial settlement, Bushong said, but it won’t be enough to cover the cost of rebuilding or provide closure for people who lost everything.

“You’re never going to get back what you lost,” she said. “There are people who lost 50 years of stuff, and no amount of money is going to replace everything.”

More than a lawsuit, Corley said there’s value in finding answers to questions such as why his neighborhood flooded.

Beaumont law firm Reaud, Morgan and Quinn hasn’t yet filed a lawsuit, and attorney Adam Nichols said it’s not clear yet whether one will be filed.

“At this point, we’re just looking into what happened with DD7,” he said. “We’re investigating.”

Earlier this month, the firm held a public meeting in Groves, Texas, that attracted hundreds of people to sign up for a potential suit and learn about helpful government programs. A similar meeting held Thursday attracted between 40 and 50 people.

Although people signed up for a suit during the meetings, Nichols said that was not the primary purpose.

Kelley said he hasn’t received documents from the Beaumont firm about the lawsuit, including a formal complaint. Asked about the potential suit, he stressed the quality of work performed by DD7 employees under stressful conditions.

“I think under the circumstances my guys persevered,” Kelley said. “The bottom line is we live here too. Our families live here — brothers, sisters, mothers. Why would we not do our job and risk everybody?”

‘Everything was upside down by then’

Stephen Barbini, who rescued dozens of people from flooded homes on Linkwood Street, said a DD7 employee remained at a nearby pump station even as rescues occurred hundreds of yards away.

At 7 p.m. on Aug. 29, a shift change was scheduled, but DD7 employees couldn’t leave their posts because of floodwater. Meanwhile, incoming employees couldn’t access the pump stations. By 8 p.m. rescues had already started in Port Arthur and Groves.

By 3 a.m. or 4 a.m. on Aug. 30, Kelley said standing water in his office rose high enough to begin spilling into his boots. At the time, he was alternating between phone calls with with emergency personnel, DD7 staff and county leaders.

“We had to keep going,” he said. “I just kept looking at the wall while I’m on the phone and watching the water come up … Two of my supervisors had already been in a couple times and said ‘look, you’ve got to get out of here.’”

“‘Look, go do what you need to do. I’m busy,’” he recalled telling the two DD7 staff members.

That evening — Aug. 30 at 5 p.m. — tanks for the Crane Bayou pump station, began to run low, Kelley said. DD7 employees started shutting off the station’s smallest pumps to conserve fuel for larger ones. By 9 p.m., no fuel remained, and DD7 employees either shut off the remaining pumps or the pumps operated until shutting off themselves.

Kelley said fuel tanks at the pump station’s sites usually last for three days, but adverse conditions during Harvey decreased the time to which fuel lasted.

He addressed criticism about running low on fuel by saying floodwater submerged a number of DD7’s fuel trucks. In addition, loading areas at local refineries were not open because of floodwater.

Kelley said he’s not sure whether Crane Bayou’s fuel shortage worsened flooding across a specific area, but by the time its pumps stopped “everybody had already flooded.”

“Everything was already upside down by then,” he said.

At one point, Alligator Bayou — the largest pump station in DD7 — started to run low on fuel, but crews delivered a load of fuel before it was too late.

Asked about flooding in the Port Arthur area, East said the Texas Gulf Coast’s topography didn’t help. The slope and elevation of land traditionally dictate how well water drains in an area, he said.

“The area along the entire Texas Gulf Coast is this flat, coastal plane,” he said. “The topography did not provide a lot of relief.”

He said any drainage system would be stressed to move the amount of water dropped by Harvey — more than 60 inches of rain in some spots — in a period of less than a week.

Port Arthur City Councilman Willie “Bae” Lewis Jr. said major upgrades need to be made to DD7, which is independent of city government, and the city’s drainage pumps and canals, which feed into DD7. Specifically, Lewis said, DD7 and city government need to increase pumping capacity and elevate pumps above flood levels

“Not spending money is not an option,” he said.

Asked about the cost of such an endeavor, Lewis said the city can use grants from the Federal Emergency Management Agency and other organizations.

“We’ll be in a better position now, after the storm, to get the grants and make these corrections without a tax increase,” he said.

Meanwhile, Kelley says there’s “not enough money in the word” to build a drainage system that could handle the amount of rain dumped by Harvey.

“And even if it was possible, it would cost billions of dollars,” he said.

The Army Corps of Engineers also could provide more than $700 million for levee improvements as part of an ongoing study from Sabine Lake to Galveston, Kelley said.

Kelley wouldn’t say explicitly whether a tax increase may be needed for future improvements. However, Kelley said he doubts that the local tax base could support drainage improvements that would have handled Tropical Storm Harvey’s flood water perfectly.