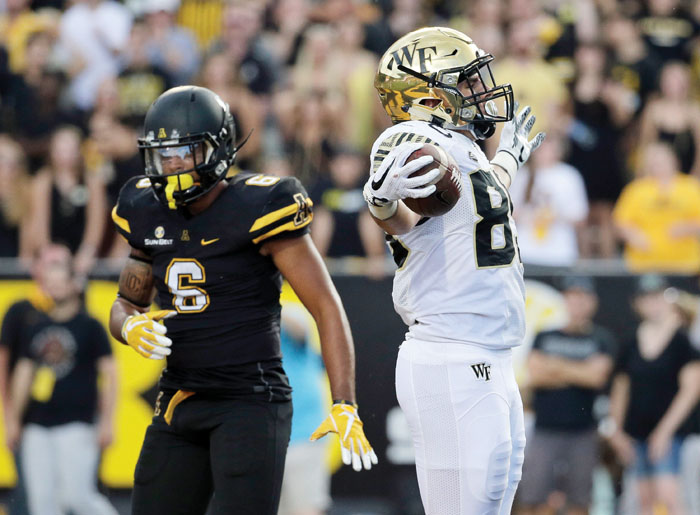 WINSTON-SALEM (AP) — Florida State’s visit to Wake Forest on Saturday will match an undefeated team against one trying for its first victory.

But the teams aren’t in the roles you might expect.

This time it’s the perennial-powerhouse Seminoles (0-2, 0-1 Atlantic Coast Conference) who are winless and the Demon Deacons (4-0, 1-0) who are trying to keep things rolling entering the heart of conference play.

Wake Forest coach Dave Clawson isn’t buying that the Seminoles are struggling, explaining that their losses as coming to No. 1 Alabama and to a stout North Carolina State team while breaking in a freshman quarterback. They’ve also had one game postponed and another canceled due to Hurricane Irma.

“To paraphrase … Mark Twain, reports of their demise have been greatly exaggerated,” Clawson said.

The oddsmakers agree, installing Florida State as a 7-point favorite. Linebacker Cole Minshew says his team is looking to “make a statement” against a Wake Forest team that’s 4-0 for the second straight year and trying to reach a second straight bowl game after consecutive 3-9 seasons in 2014 and ‘15.

The Seminoles are off to their worst start in 28 years, and the combined record of their next four opponents is 13-1. But the last time they started 0-2, in 1989, they reeled off 10 straight victories to end the season.

They have a few issues that need to be corrected quickly. The offense has produced only two touchdowns, though freshman quarterback James Blackman earned praise from coach Jimbo Fisher after going 22 of 39 for 279 yards and a touchdown in his first career start against N.C. State.

“Ignore the clutter, ignore things outside, and do the things that are in your control about how you prepare again and come back and play it one game at a time,” Fisher said.

FOUR GAMES TO TWO: Because Wake Forest has played four games to Florida State’s two, the Seminoles have twice as much game film available on the Demon Deacons. Yet Wake Forest DE Duke Ejiofor says that gives his team an advantage because “we’ve played more snaps and have more experience.”

THE SERIES: Florida State leads the series 28-6-1 and has won the last five meetings. In the six times Wake Forest has won, the Seminoles have never finished better than 9-4 (2011, 2008).

PRESSURE THE QUARTERBACK: Florida State has done a poor job generating any sort of pass rush in its first two games, which has led to opponents also converting a high rate of third downs. With the Seminoles facing another experienced quarterback this week, getting a couple sacks could provide a boost in confidence to a defense that struggled last week against N.C. State both against the run and pass.

Sandwiched in between is a matchup with Syracuse on Saturday — but coach Dave Doeren refuses to call the visit from the Orange a trap game.

“I don’t look at it” that way, Doeren said. “Any time you play a team that can score and that has a quarterback that thinks he’s that good, or is that good, it’s not a trap game at all. And our guys know that.”

Maybe, but it seems like an obvious psychological hurdle for the Wolfpack (3-1, 1-0 Atlantic Coast Conference), who moved to the brink of their first Top 25 ranking since the 2010 season with their 27-21 victory over then-No. 12 Florida State.

A visit from reigning Heisman Trophy winner Lamar Jackson and No. 17 Louisville awaits next Thursday night.

So, it might be easy to overlook Syracuse (2-2), which has a home loss to Middle Tennessee State on its resume.

“Just because we beat Florida State doesn’t mean that Syracuse is going to be an easy game,” he said.

The Orange figures to have enough offensive weapons to test an N.C. State defense that ranks second in the ACC against the run and is the strength of the team. Syracuse quarterback Eric Dungey (321.3 ypg) trails only Jackson (431) among the ACC’s leaders in total offense, and the Orange throw for 300 yards per game.

“I think that we’re playing well. The hard thing about our country and football is it always comes down to Ws and Ls,” second-year coach Dino Babers said. “I know that we’re getting better, but I can’t prove it in the box score.”

Some things to know about the Syracuse-N.C. State game:

POLL IMPLICATIONS: The Wolfpack were the first team out of the Top 25 this week, winding up five points behind No. 25 LSU — which beat Syracuse last week. N.C. State hasn’t appeared in the rankings since the final poll of the 2010 season — when Russell Wilson was still taking snaps.

TALE OF THE TAPE: The stats appear similar for N.C. State and Syracuse. Both teams average roughly 35 points, allow about 23 and gain about 460 total yards per game. The biggest difference is turnovers — the Wolfpack have just two of them while Syracuse has given it away eight times.

THE SERIES: The Wolfpack have won nine of the 10 meetings between the schools. Syracuse’s lone victory came in Raleigh in 2013, a 24-10 win that came as part of a season-ending eight-game losing streak for N.C. State in Doeren’s first season.

CHUBB IN CONTROL: N.C. State DE Bradley Chubb had three tackles for a loss against Florida State, two sacks — including one that forced a field goal late in the first half — and a forced fumble. He has 19½ sacks for his career, six behind school-record-holder Mario Edwards.

QUICK HITS: N.C. State QB Ryan Finley has thrown 224 straight passes without an interception — the longest active string in the nation. … The Wolfpack have not allowed a touchdown in the fourth quarter. … Syracuse WR Steve Ishmael leads the nation with 11.3 receptions per game.