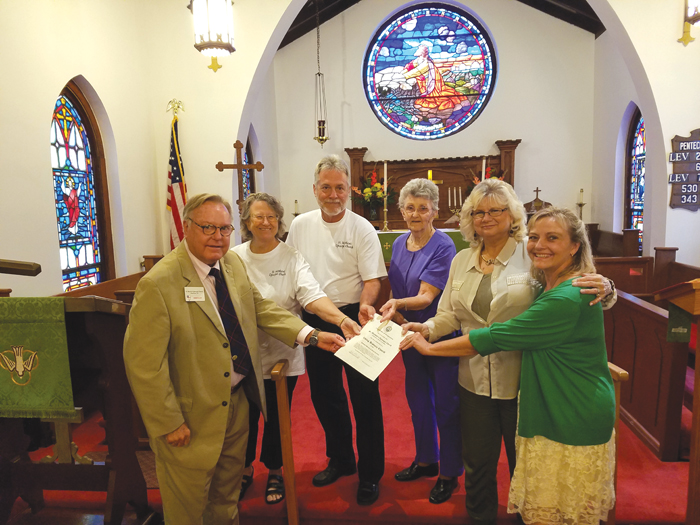 This church was founded in 1887 by Frances Johnstone Murdoch. The members of the community originally built a wood framed church on five acres of land donated by Ann McNeely who was a member of St. Luke’s Episcopal Church in Salisbury.

St. Matthew’s was one of three missions started in the rural part of western Rowan County by Mr. Murdoch. Although the two other missions fell, St. Matthew’s has survived into the 21st century with the descendants of the original families still being a vital part of the church. The central location in between family farms in the late 1880s was ideal for the beginning members.

Before the church was built, the families in the area had held services in their homes. Most of the farmers and land owners maintained identity through their descendants and they continued to build and grow this mission.

The original Statesville Road was dirt and it ran behind the church and the gulley can still be seen today. The railroad track that ran a little further behind that road served as a walkway for members of the congregation from the surrounding farms.

Their history states that The Rev. Sidney Bost preached the first sermon and that Lawson Kepley (1857-1921) was the first Sunday School teacher. However, the Diocese records show that also during the time of 1887 through 1895 the Rev. Murdoch himself also served as clergy. Rev. Murdoch died in 1909.

It has been stated by members in years past that the original wood church burned down just prior to 1911. It was in 1912 that Eliza and Margaret Murdoch, the widow and sister of Frances donated the money for a new brick church. It was requested by Ms. Murdoch that the new building be built as a memorial to Frances. This is the church building still used today.

The years following 1912 involved various clergy and remodels to the original brick building with continued growth. The church is continuing to support itself by the members of the congregation which are the descendants of the original members. It continues services and activities for the community. Generation after generation have come, participated, given, worked, provided and kept the church alive.

This church has been a continued stable part of the west Rowan community and provided to its members a church home.

The church is currently served alternately by the Rev. Barbara Cook as well as the Reverends Edwin and Frances Cox.