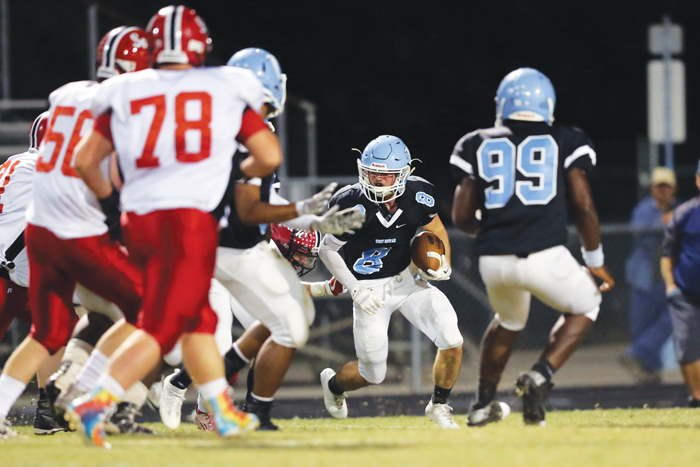 MOUNT ULLA — Ty’Kese Warren’s soaring catch in the end zone got West Rowan back even after a painfully slow start, and his teammates took it from there, blowing out South Rowan, 48-6, on Friday.

The Falcons played at a higher level than South in the first non-conference game between the schools in many years. Warren’s leaping grab was just the most striking example.

“I had one-on-one coverage and  it was a simple take-off route,” said Warren, who also had a TD  catch in the comeback win against Concord. “I saw the ball coming.  I just had to go up and get it.”

West drop end Brandon Wallace made it a running-clock game with a pick-six, his second interception of the night, late in the third quarter, but it wasn’t the standard running-clock wipeout. South ruled the first quarter and actually held the lead for nine minutes before Payne Stolsworth found Warren in the right corner of the end zone for a 6-all tie on a fourth-and-14 play from the South 19.

“I know we’re a better team than it looks like on the scoreboard,” said South back Marquis Rhyne, who provided 116 rushing yards for the Raiders. “It was my turn to get a lot of carries, and I did what I could.”

South got that early lead three minutes into the game on a freak play. Stolsworth, moving to his right, tossed what appeared to be a harmless incompletion in his own backfield, but it was ruled as a backwards pass, so it was a free ball. South cornerback Scott Stephens didn’t wait around to see how the officials saw it. He scooped the ball up, rambled to the end zone, and was awarded for his effort with six points.

“Give South credit,” West coach Joe Nixon said. “Their kids played to the whistle and they got on that ball.”

South’s defense fed off that score, stopped the Falcons and forced a punt. Defensive end Mohammed Dolley played especially well in that first quarter for the Raiders. He had a tackle for loss and another big hit on a short gain.

“We were fighting hard,” Dolley said. “That’s all you can do — keep fighting.”

Even after the Stolsworth-to-Warren TD, the game stayed 6-all. West kicked the PAT, but a holding penalty forced the Falcons to kick it again. Federico Cruz’s second try failed.

Where it turned against the Raiders was when punter Kory Sellers faked a punt on fourth-and-8 from the South 33. Sellers thought he saw an opening, but West was well-prepared for South’s faked-punt antics, and Sellers was buried back at the South 22.

West scored easily with the short field, with Martavio Rankin barreling through a gargantuan hole for the go-ahead touchdown in the opening minute of the second quarter.

Then South went three-and-out and tried to punt again. The next disaster wasn’t Sellers’ fault. He intended to punt, but he got stampeded by Falcons before he could do so, and he was tackled inside the South 20. Again, West scored swiftly with the short field. Jayden Jones got the touchdown.

“We had a bad break early in the game and got behind, but our defense was playing amazing,” said Devin Turner, West’s stud senior lineman and the county’s most physical presence. “We had a sophomore defensive end (Baiden Suddarth) who played a fantastic game. That second quarter we all really started to play. We could feel things turning our way.”

The backbreaker for South’s attempt to stay in the game came in the final two minutes of the first half. Sellers got off a nice punt, West had a penalty at the 5-yard line on the runback, and the Falcons were pinned in the shadow of their goal line. On fourth-and-long, West’s Stolsworth was punting, but the Raiders roughed him trying vainly to block the kick.

That moved the ball out to the West 17 with a first down, and the Falcons struck quickly and efficiently with Stolsworth making a nice fake and then looking deep for sprinter Jalen Houston. Houston was behind everyone. Stolsworth under-threw him a bit, but Houston was still able to make the catch at the South 40, and he hauled the ball to the 15 for a huge gain. Rankin punched in his second TD from the 6-yard line a few seconds later, and West was in complete control, 27-6, heading to the break.

“It was a really tough start for us tonight,” said West right guard Phillip McDaniel. “We just had to find a way to come back from it — and we did. We started winning upfront.”

“Rhyne is very special to our offense because he can play a lot of different places,” South coach Daniel Yow said. “He did a heck of a job tonight.”

Rhyne broke runs of 43 and 33 in the second half, but the Raiders still couldn’t get to the end zone.

“The same story we’ve had all year,” Yow said with a sigh. “We move the ball, but we’re not getting points.”

South was its own worst enemy at times. Besides that trio of mishaps on punts, the Raiders lost five turnovers — three fumbles and the two picks by Wallace.

West pulled away after halftime, with scoring runs by Jaden Perry and a 46-yard blast to daylight by Jones, who finished with 105 rushing yards.

Wallace’s pick-six — he jumped a flat route inside the West 15-yard line — had some fans chanting his name and had others heading toward the exits.

“Happy for Brandon because I don’t think he’d ever had an interception, much less two in the same night,” Nixon said. “South’s good at what they do on offense with the run-pass option, and they can put your walk players in a bind. But I thought we did a very good job defensively and we found a way to win. In the second and third quarters, that’s some of the best football we’ve played.”

In the fourth quarter, as the clock churned relentlessly, senior reserve Jesse Baker got seven carries for the Falcons, cheerfully plowing into red waves of tacklers as the crowd screamed.

Baker’s effort left all the Falcons with  smiles on their faces.

“Hey, it’s another win,” McDaniel said. “Every win we can get is big, and it’s always good to win in the county.”