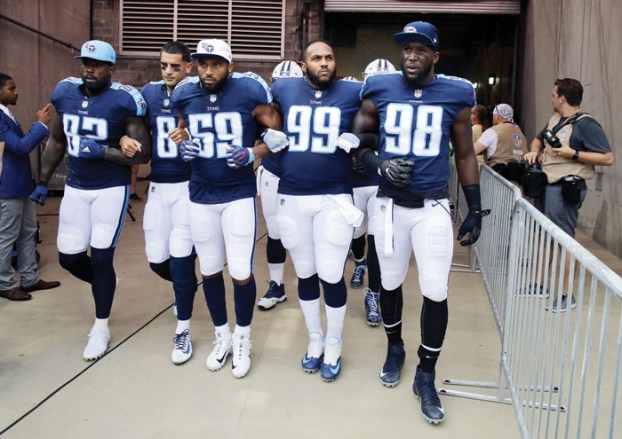 FILE - In this Sept. 24, 2017, file photo, Tennessee Titans’ Delanie Walker (82), Marcus Mariota (8), Wesley Woodyard (59), Jurrell Casey (99) and Brian Orakpo (98) walk to the field with arms linked after the national anthem had been played before an NFL football game against the Seattle Seahawks in Nashville, Tenn. Walker says he and his family have received death threats since he told fans not to come to games if they felt disrespected by NFL players' protests. Walker shared the threats Thursday night, Sept. 28, 2017, in a social media post. (AP Photo/James Kenney, File)

NASHVILLE, Tenn. (AP) — The Tennessee Titans informed the NFL about the death threats to Pro Bowl tight end Delanie Walker and his family because of the anthem protests. The league said Friday its security department is investigating.

Walker disclosed the threats Thursday night in a post shared on social media . Walker told fans upset by the protests that they didn’t have to go to the games if they felt disrespected.

“We had a discussion about it and have turned it over to the NFL, and will let them deal with it,” coach Mike Mularkey said. “We’re very comfortable and confident that it will all be settled. We did not make a big issue of it, but we are definitely aware of it. It’s all out of our hands.”

Mularkey praised Walker for his play, and his character.

“Everybody respects Delanie Walker,” Mularkey said. “I know he’s about as much of a pro as I’ve ever been around on and off the field. So that’s important.”

The tight end was not in the locker room when it was open to media after practice. But Walker, who represented the NFL on a USO Tour of the Middle East last spring, made clear in his post he won’t be deterred.

“The racist and violent words directed at me and my son only serve as another reminder that our country remains divided and full of hateful rhetoric,” Walker wrote. “These words of hate will only fuel me in my efforts to continue my work reaching out to different community groups, listening to opposing voices, and honoring the men and women in the Armed Forces who risk their lives every day so that we may have this dialogue.”

Tennessee was one of three teams that stayed inside the locker room last week, joining Seattle and Pittsburgh. Mularkey gave no indication of a plan for Sunday when the Titans (2-1) play at Houston (1-2).

“I think everybody has freedom of speech,” Mularkey said. “They can do what they want to do.”

Wide receiver Rishard Matthews, who announced his plans to kneel for the anthem until President Trump apologizes for his remarks last week, was dismayed by the threats to Walker.

“We have a Pro Bowl player getting death threats,” Matthews said. “That kind of speaks for itself. I saw the post and it was very unfortunate.”

Walker isn’t the only NFL player dealing with a backlash from protesting.

Detroit Lions defensive tackle Akeem Spence said Twitter on Thursday that because of his protest his father, a contractor, was denied a job on a house. Spence was among the Lions who took a knee before their game against Atlanta.

More than 100 people came out to Swansea, Massachusetts , on Thursday night to throw Patriots T-shirts and other team apparel into a fire pit as they waved American flags and sang patriotic songs.