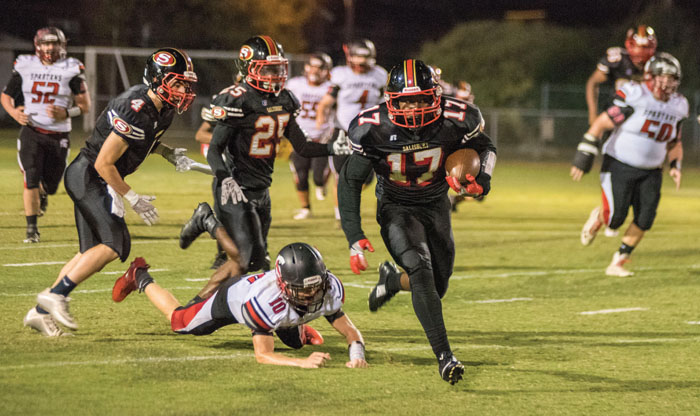 SALISBURY —  On a night of big-play offense, the Salisbury Hornets got near-perfection and a record-setting passing performance from senior quarterback Griffin Myers and routed Central Davidson, 58-0, Friday night at Ludwig Stadium.

When the passing game started clicking right out of the gate, Myers and the Hornets went to it early and often to produce the lopsided, Central Carolina Conference victory.

In the process, Myers set a new school passing record as he hit 10 of 12 throws for 280 yards and four touchdowns. The previous mark was set in 1991 by Brian Pollard, who threw for 266 against Central Cabarrus.

“We went to the run with our option early,” Myers said. “But then the pass game started working and we just went with that. I had good protection tonight.” He also credited his receivers for coming back to him and getting open when Myers was forced to scramble.

Myers connected with five different receivers in the game, with the trio of Will Taylor, Joe Steinman and Tyrone Johnson providing most of the spectacular damage. Steinman caught three passes for 110 yards and a TD, plus a 44-yard reception that set up another score.

Taylor, a senior wide receiver, caught back-to-back TD passes in the first half and had 44 yards receiving. Johnson used sheer speed with three catches for 84 yards, including a 60-yard scoring sprint late in the third.

“I was just trying to help my quarterback and get open and score,” Taylor said of his first-ever two touchdown performance. “Overall, we are looking good as we head into our bye week.”

All of the passing heroics made for a happy Homecoming night celebration at Salisbury, as they improved to 5-1 overall and 4-0 in the CCC. The Spartans dropped to 0-5 on the season and 0-3 in the CCC. It was also their 30th consecutive football loss, dating back to October 2014.

“I think this game was more about speed in space than anything,” noted winning head coach Brian Hinson. Stating that his team did not really have a good week of practice, “but our kids really came out and executed tonight. Our defense really played an excellent game.”

The Hornets’ defense held Central to 196 yards of total offense, much of it coming in the second half when the outcome was firmly decided.  The Salisbury defenders also posted four sacks, stopped the Spartans on downs three times, pounced on a fumble then capped it off with a spectacular 86-yard interception return for a TD by senior linebacker Ray Mashore in the final two minutes.

Spartans’ quarterback Justin Fortner had his team down to the Salisbury 14-yard line as time was ticking down when he went back to pass. Two Salisbury defenders pinched in on him for an apparent sack when Mashore came sprinting out of the scrum with the ball and raced the other way untouched.

“He definitely threw it, ” Mashore said. “I just happened to be in the passing lane, stepped in front and ran the other way.” Mashore stated it was his first pick-six as a defender but hoped it would not be his last. “Overall, our defense really came through tonight and got the shutout.”

With all of the passing success for the Hornets in the contest, the ground attack was not needed as much as usual, but that did not stop Salisbury runners from putting on an impressive display nonetheless. Overall, Salisbury only ran 20 rushing plays on a night when the team posted a whopping 536 yards of total offense.

Receiver Trell Baker carried the ball twice on end-arounds early on, breaking one for 50 yards and the other for 33. Freshman Mike McLean only got three carries in the game but the last one was a 73-yard TD sprint just before halftime and aided greatly by a key block from Jahbreel Russell.  Both Russell and Jaquan Davis added touchdowns of their in the second half as Salisbury forced a running clock when the score reached 44-0.

It was a contest the Hornets were expected to win handily and Hinson was especially happy for his senior quarterback Myers. “Griffin managed the game well and did a great job of running the option.” Hinson says. “In certain games this season, he has shown flashes of doing something really great. But Griffin throws it a lot better than people think he does.”

The Hornets now head into an open week with CCC foe Ledford looming, two weeks down the road.

NOTES: The Hornets’ defense suffered an apparent key loss late in the first half when sophomore linebacker Blaine Shellhorn took a helmet to the knee and was on crutches after the game. Hinson  said they would know the extent of the injury in a few days, but it would be a key loss for the defense. Up until the injury Friday, Shellhorn was in on two sacks and had several tackles for loss. … Central’s Alex Trexler rushed for 103 yards on 24 carries. … In the halftime Homecoming festivities, senior Katana Alexander was crowed the 2017 Queen while football player LaVaric Johnekin was named the Homecoming King.