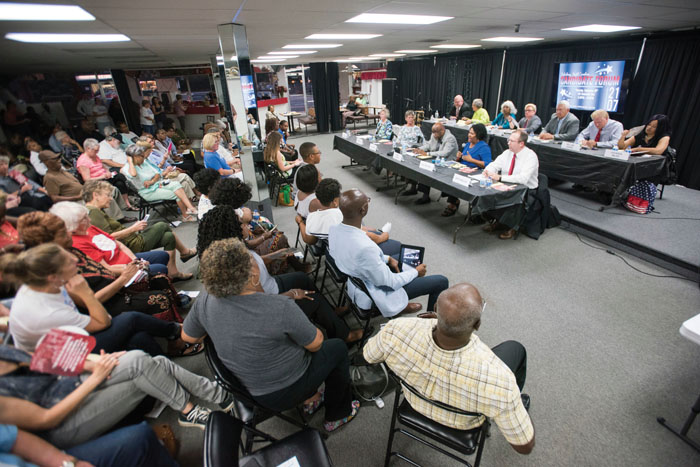 The forum, which was moderated by a student from Catawba College and a student from the University of North Carolina at Charlotte, allowed candidates to have a “challenge card” — an index card with an exclamation mark drawn on it that, when raised, signaled that a candidate wanted to ask another candidate a question.

The challenge cards could be used only a limited number of times and under certain conditions. But the opportunity to directly address each other — a chance that was not given at the last candidate forum — gave the candidates a way to restate a question if they felt the responder had not adequately answered it.

Kenny Hardin, an incumbent council member, used the opportunity when Mayor Karen Alexander was asked a question about how she would make public-comment periods at council meetings more hospitable if she is re-elected.

Alexander was involved in an incident in August in which she shushed Carolyn Logan while Logan was speaking during a public-comment period.

Alexander answered the moderator’s question by saying that she knew she has been “very criticized in terms of public comment.”

She referred to a statement she gave about the August incident during a subsequent City Council meeting.

“I talked about the fact that we had … several very traumatic situations in our community. And I had been very lenient in allowing people to say things that really … aren’t even in our purview. So we have sort of reined it in,” Alexander said. “We will gavel if someone is personally attacking either the mayor or any council person. Because this is not what it’s for.”

It was then that Hardin raised his challenge card.

“How do you not apologize and point the finger at the community?” Hardin asked her.

The rules of the forum gave Alexander 30 seconds to respond.

“I would say that we as council members are ordinary citizens who have stepped up to run for office, to be elected, to serve our citizens. So we deserve the same amount of respect that you would as a citizen,” Alexander said. “So if you come and attack the council members, then I think that it is our First Amendment right also to respond and say no, that is not possible.”

Candidate Todd Paris was then asked the same question as Alexander — “How might the City Council be more hospitable and responsive to public comments?”

He said that because the public-comment period is a public forum, people are entitled to a certain amount of free speech.

“In that purview of just that meeting, (the council) can’t control content legally except for threats and obscenities,” Paris said. “And no one has defined for me or anyone else in our rules what a ‘personal attack’ is.”

Only two other candidates were asked about the public-comment issue — Al Heggins and Leda Belk.

Heggins said that in order to answer the question, she would “fall back on (my) Southern background.”

“When somebody says something you don’t like and you’re in public, you just don’t fight. You say ‘thank you’ and ‘bless your heart,’” Heggins said. “That’s the lighter side of this, but the more serious side of this is simply about respect. … When you’re in any kind of relationship and you can’t respect one another, that’s a problem.”

Belk answered by asking how the City Council could make public comment “work for the people.”

Candidates were also asked about issues such as Fibrant, crime, transparency and how to generate enthusiasm about voting.

“I’m not sure who those 14.2 percent are. … I’m not sure they’re going to truly represent me or you. And that’s why we need to make sure that we’re doing our responsibility,” Sheffield said.

John Struzick said low voter turnout is indicative of a problem not just in Salisbury but in society as a whole.

“So many people are OK with just sitting back and letting the few make all the decisions,” Struzick said. “We’ve got to get to the 85 percent who are staying home.”

Incumbent Councilman David Post said there is only so much that could be done about turnout in Salisbury.

“The legislature in Raleigh has taken steps to make it more difficult to vote. So we’ve got one group of people wanting less people to vote and your question is how to make more people vote,” Post said. “The first thing to do is go to Raleigh and take some of those restrictions away.”

In response to a similarly worded question, Latasha Wilks said she would want to hear what keeps people from voting.

“I would like to hear from the people, their concerns and (what they’d) want to be involved (in),” Wilks said. “What is hindering them from not being involved?”

Asked what the council could do to make its decisions more transparent, incumbent Brian Miller said he thinks they are already as transparent as they can be.

PJ Ricks said she agrees that some issues cannot be discussed as openly as people would like.

“But we always have public forum, if it’s something that the public has input in. And that’s the time for the citizens of Salisbury to come and voice your opinion,” Ricks said. “A lot of times, we don’t get opinions voiced by the community and then, when a decision is made, everyone is unhappy.”

Rodney Queen said the fact that the question is being asked means people don’t think the council is being transparent.

“I know one thing: When I’m there, we’ll put all of the cards on the table,” Queen said. “We have to be transparent because we’re serving you. You have to know what’s going on.”

About 100 people attended the forum, according to an organizer’s estimate.