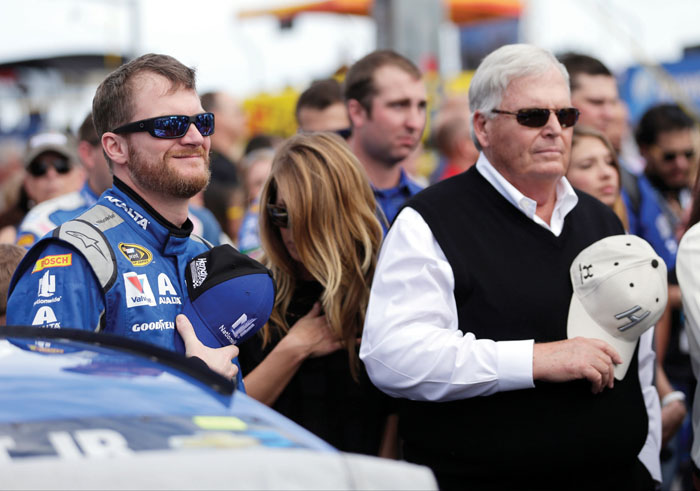 FILE - In this Feb. 21, 2016, file photo, Dale Earnhardt Jr, left, and team owner Rick Hendrick stand during the national anthem before the NASCAR Daytona 500 Sprint Cup Series auto race at Daytona International Speedway in Daytona Beach, Fla. Earnhardt Jr. said the views of two NASCAR team owners who said they would fire employees who do not stand for the national anthem does not speak for the sport. He said he hasn't discussed the issue with his teammates, crew or other employees at Hendrick Motorsports, but added that he will continue to stand for the anthem. (AP Photo/Chuck Burton, File)

DOVER, Del. (AP) — Two NASCAR team owners who said they would fire employees who do not stand for the national anthem do not speak for the sport, star driver Dale Earnhardt Jr. said Friday.

Several owners and executives said last weekend they wouldn’t want anyone in their organizations to protest as NFL players have done to indicate their concern with social injustices, particularly against African-Americans. Richard Childress, who was Dale Earnhardt’s longtime team owner, said of protesting: “It’ll get you a ride on a Greyhound bus.” Hall of Fame driver Richard Petty said anyone that refused to stand for the anthem “ought to be out of the country.”

Earnhardt, NASCAR’s most popular driver who will retire at the end of the season, tweeted Monday in support of peaceful protest .  Earnhardt said he hasn’t discussed the issue with his teammates, crew or other employees at Hendrick Motorsports. He said he will continue to stand for the anthem.

“But I’m not quick to rush to judgment on somebody who wants to do something different,” Earnhardt said Friday.

Earnhardt said on weekly podcast he had grown weary of the “same tired stigma that we’ve dealt with for many, many years.”

“I think the whole sports respects Richard Petty and Richard Childress for what they’ve accomplished and what they’ve done, but they speak for themselves,” Earnhardt said at Dover International Speedway. “They don’t speak for the entire sport, I believe. I think that everybody would handle those situations differently.”

Austin Dillon, Childress’ grandson, said it was an honor to stand for the anthem.

“I enjoy that part of my weekend so I can give a little bit back to those who have given their lives to allow me to go race,” he said.

President Donald Trump lauded NASCAR on Monday because no one protested during the national anthem before last weekend’s race at New Hampshire Motorspeedway.

“So proud of NASCAR and its supporters and fans. They won’t put up with disrespecting our Country or our Flag – they said it loud and clear!” Trump tweeted Monday.

NASCAR, which is in the midst of its playoffs, was a punchline this week on “The Late Show with Stephen Colbert “ and “Late Night With Seth Meyers .”

Seven-time series champion Jimmie Johnson, who was not invited to the White House to honor his 2016 championship, said this week he supported peaceful protest. Brad Keselowski, the 2012 Cup champion, expressed his views in a series of tweets , writing: “Please don’t believe that when we stand it’s out of disrespect to civil rights; it is and always will be out of respect and love for our flag.”

Danica Patrick was among a handful of drivers asked about the issue at Dover and said she would continue to stand for the anthem.

“You have to figure out what’s more important to you,” she said. “If you think something should be done differently and you might sacrifice your job, that’s your choice. Otherwise, it’s your choice the other way, too. There’s plenty of platforms to speak your mind. If it comes in interference with putting food on the table or being able to do something that you love, I think that you should probably go by the rules.”

DOVER, Del. (AP) — Martin Truex Jr. has tried to enjoy his career year as much as he can. The veteran driver says he never knows when the run might end.

He kept on rolling at Dover.

Truex will try to win his sixth race of the season from the pole at Dover International Speedway in NASCAR’s third playoff race. Truex has been the driver to beat all season and he proved it again Friday, when he turned a lap of 160.664 mph to win his second pole of the season.

Truex had clinched a berth in the second round of the playoffs when he won at Chicagoland Speedway. He had the dominant car last week at New Hampshire Motor Speedway until he was caught up in a wreck and finished fifth.

Truex has nine wins in the No. 78 Toyota at Furniture Row Racing over the last two years after winning just three times in his first 10 years. Oh, and Truex won this race last year.

“It takes so many things to come together to be in a position that I’ve been the last few years, really,” he said. “I’m very thankful, I’m definitely enjoying it. At the same time, there’s that chance of a championship out there. You can’t lose focus and say, this is going great, we’re going to show up to the track and everything’s going to be fine. You still have to work hard.”

Truex ended Kyle Busch’s bid at three straight poles. Busch started first in the first two playoff races and will start second on Sunday for the all-Toyota front row. He advanced to the second round when he won at New Hampshire.

“I know when it comes to race time, we will be fine here,” Johnson said.

Dover marks the first cutoff race and the playoff field will be sliced from 16 drivers to 12.

“It’s going to be a race within the race,” Dillon said. “You’ve got to be smart throughout and make sure you’re there at the end and put yourself in good positions. I’m looking forward to the challenge.”

Larson and Keselowski also earned automatic spots in the second round on points.

Stenhouse holds the final transfer spot to the second round and McMurray is 11th.

“You are going to be dependent on the team to kind of fill you in like if you have to have another position or if someone is pressuring you that you can maybe give up that position and not get wrecked,” McMurray said.