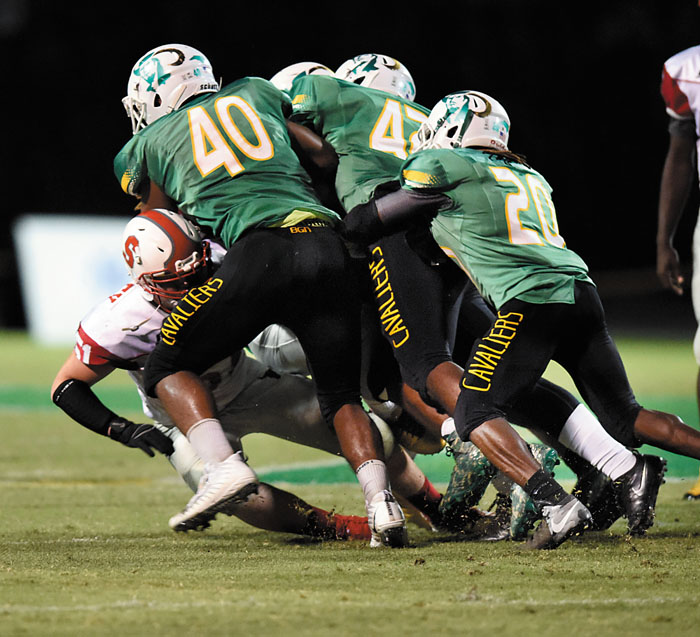 SPENCER —It shouldn’t have come down to defensive tackle Matthew Hoosier, with his ham-hock forearms, stuffing a two-point conversion try in the waning seconds for North Rowan to prevail Friday night.

But it did. And he did. And the shell-shocked Cavaliers held on for a skin-of-their-teeth, 20-19 Yadkin Valley Conference victory against visiting South Stanly.

“I knew it was going to No. 41 and I knew he was going outside,” Hoosier said, after wrestling beefy fullback Caleb Blalock to the turf inside the 1-yard line with 12.7 seconds to play. “(Tyzai) Lyles got to him first and slowed him down. I just grabbed him by the waist and slammed him.”

If North (5-1, 2-0) maps its way to a conference championship this season, this game — and that play — will be remembered as one that almost got away. South Stanly nearly pulled off a major upset by scoring two fourth-quarter touchdowns and forcing North’s only punt of the game. The outcome wasn’t cemented until Cavs’ junior Logan Stoner recovered an ensuing onside kick.

“It was tough at the end,” defensive end Darren Williams said. “They started running these heavy formations. Give (Blalock) some credit. He got low and he was ready. He strapped up his chin strap and tried to run us over.”

South coach Bradley Frodge said the decision to try for two — as opposed to kicking a game-tying extra point — never entered his mind.

“There was never a doubt,” he said. “Once we missed an extra point (earlier in the fourth quarter), we were going for the win. There’s no moral victory to be right there with all the momentum, but the game gives and the game takes. It’s still hard to walk away.”

When the game ended, North had itself a victory that set off some alarms. It’s proficient running game that had averaged better than 200 yards-per-game was limited to 73. All-county back Jaleel Webster put up a season-low 48 yards and stable-mate Malcolm Wilson carried only three times for six yards — all in the second half.

“I think their game-plan coming in was to take away Webster and Malcolm,” winning coach Ben Hampton said, after North extended its winning streak to four games. “It’s probably what we’re going to see the rest of the season. We’re going to have to throw the ball to beat you — and throwing the ball means catching the ball. We were not good at that at all tonight.”

A number of dropped passes by open receivers only amplified North’s problems. So much so that junior quarterback Willis Mitchell sounded almost apologetic after passing for 246 yards and two touchdowns.

“When we’re working and the offensive line is blocking, we’re the best offensive team in the county,” Mitchell said. “I feel bad for our defense. They couldn’t get a break in the second half because we weren’t doing what we were supposed to do.”

It was in the first half. North took the opening kickoff, marched 54 yards in seven plays and went ahead, 7-0, when Mitchell lobbed a 3-yard screen pass to Quintous Smith for an early touchdown. Webster skated four yards up the middle for a TD that made it 13-0 with 3:34 to play in the first period.

South broke through late in the first half when Blalock capped a tone-changing, 80-yard drive and scored the first of his three touchdowns on a 1-yard plunge. North responded quickly when Mitchell spiraled a short pass to Webster on the left side — out of a trips-right formation — and the tailback motored for a 40-yard score with just 1.7 seconds remaining in the first half.

“North Rowan has athletes everywhere,” Frodge said. “You take that one play away at the end of the half and we’re right there with them. But you can’t do that.”

No, but the guests certainly put a scare into the Cavs, first by driving 68 yards in a clock-melting, 10-play scoring drive to draw within 20-13 with 4:38 remaining. And then on their final possession, when North was issued two costly penalties. The first was a face-mask call following Hoosier’s 7-yard sack on a third-and-8 call. The second was for roughing-the-passer after South quarterback Jaquez Cooke completed a 43-yard pass to Jahwan Morris, providing a first-and-goal from the North 9-yard line with 20 seconds to play.

Two snaps later, Blalock shouldered his way into the end zone, setting the stage for a molar-grinding finish.

“Hey, it’s bend but don’t break,” Mitchell said in North’s post-game locker room. “They had a chance, but our defense didn’t break.”

Hampton, of course, wore a worrisome look. “This may be the wake-up call we need,” he said. “It may be a shout-out to the rest of the YVC that we’re not what everybody says we are. Or what everybody doesn’t say what we are. Our guys know they have to get better.”

NOTES: Webster’s touchdowns were his eighth and ninth of the season. … Mitchell was intercepted late in the first quarter on a deflected pass. He’s thrown nine TDs and passed for 978 yards. … South Stanly rushed for 184 yards but Cooke passed for just 46. … Linebacker Jordan Goodine recovered a fumble for North and Lyles blocked a fourth-period extra point attempt. Williams had three sacks. Normally reliable kicker Jacob Young had a rough night. He had an extra point rejected and missed a pair field goal tries. … The Cavs visit Albemarle next Friday.