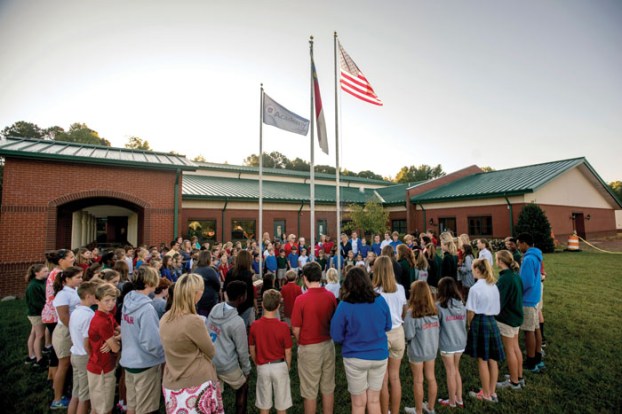 The student body at Salisbury Academy gathered just before classes began to say prayers and sing songs. Wednesday mark the 2017 See You at the Pole event that occurs annually. Jon C. Lakey/Salisbury Post

SALISBURY — It’s always an early morning in September when students at Salisbury Academy come together to form concentric rings around the flagpole. The sun is still on its way up and the grass is still wet with dew as students huddle close together, leaning on each other or holding hands.

“It’s a special morning for us,” said Lizzy Roy, the school’s director of marketing and communications.

For the local private school, See You at the Pole is a schoolwide tradition, with first- through eighth-graders gathering to lift prayers, sing hymns and grow closer as a community.

Prayers are written by school staff members and read aloud by eighth-graders, who have grown up looking forward to the privilege.

“I think it begins to provide students with a platform for leadership,” said Beverly Fowler, head of school.

“We would always look up to (eighth-graders) saying the prayers and being the leaders of the group,” eighth-grader Madelyne Lawrence said.

“And now they’re looking up to us,” classmate Morgan Jeter added.

On Wednesday morning, students said prayers for their school, their community and their country, speaking about hopes for peace and a bright future. Eighth-graders see the day as a unifying activity — and an opportunity to bond as a community that is rarely afforded.

“Today we take time just to be with other people,” eighth-grader Riley Peltz said.

“I think it really helps join the school together and helps unite us together,” said Hayes Hartpence.

Salisbury Academy was joined Wednesday by thousands of other students across the nation who chose to gather around their school’s flagpoles and start the day with prayer. It’s an annual program that’s been running for 25 years. According to its website, See You at the Pole is “about students uniting themselves in prayer before God interceding for their generation. “

But at Salisbury Academy, the moment runs deeper.