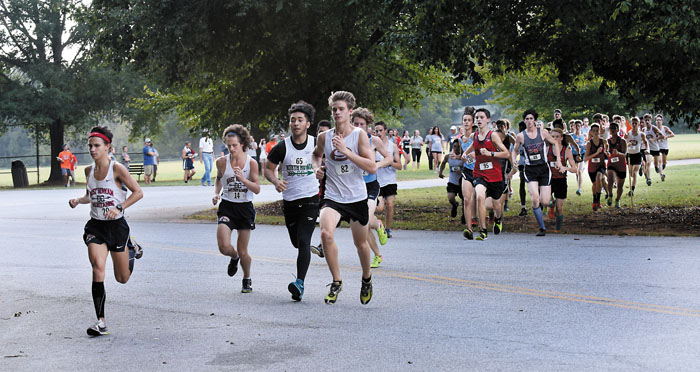 When West finished second to East Rowan in August’s pre-county meet, it appeared the Falcons’ short reign as county champs might be over, but led by seniors Luke Hager and Oscar Bautista, juniors Thomas Waldo and Matthew Ramsay, and freshman Luke Harrison the Falcons put up a score off 44 and held off East (53) and Carson (57).

“To win the county my senior year, this means everything,” Hager said. “It’s all I wanted.”

But West’s depth was too much. When Harrison came through with a 14th-place finish for West’s fifth score that closed the door on the Mustangs and Cougars.

“Luke’s had some illness, but he’s also got talent and so we went with him today as one of our seven,” West coach Scott Foster said. “He came up big-time.”

Foster said the Falcons have experienced plenty of adversity in the sickness and injury departments over the last month, but everyone was healthy on Thursday.

“Maybe we were just due for a little bit of luck,” Foster said. “Everything came together.”

Waldo, 10th in last year’s championships, led the Falcons with a third-place finish. He was clocked in 17:33.

“We’ve talked all year about doing this,” Waldo said. “We had a plan today and went out and executed it. We couldn’t have done this without everyone having a good day.”

When he finished behind Incardona and South Rowan’s freshman phenom Noah Julian (17:25), Waldo didn’t rest. He stood near the finish line, screaming for his teammates to keep pushing. And they did. He didn’t have to wait long for Hager (7th), Bautista (8th) and Ramsay (12th) to join him. Then the new kid, Harrison, finished the job.

Hager showed admirable stamina. He played every minute of West’s 1-0 soccer loss to South Iredell on Wednesday. There are plenty of two-sport athletes, but it’s obviously not easy to play two demanding ones at the same time.

“I get my miles in by running around the school during fourth block every day,” Hager said. “Then I go to soccer practice.”

Incardona led all the way. Always a contender and county runner-up to Burgess last season, he earned his first championship. But East’s second-place finish drained him more than his individual title exhilarated him.

“We fought hard and we stayed positive mentally,” Incardona said. “I’m a senior, my last time here, so it’s a bittersweet day.”

East coach Rick Roseman has been around as long as Rowan County cross country has. He’s seen all the great ones. Incardona isn’t the swiftest the county has produced, but his heart is as huge as any of the champions who preceded him.

“Sean puts forth so much effort,” Roseman said. “That’s a very dedicated kid. I’m just extremely proud of him.”

Foster, understandably, had the widest smile as the Falcons headed for the bus. They’d brought the county championship trophy with them, prepared to hand it over to another school if that’s the way things played out. But they didn’t have to give it up. Hager and Bautista said goodbye to Dan Nicholas Park as champions.

“Our slogan all year long has been to turn the page,” Foster said. “This is a new group of guys, but they’re still county champions.”