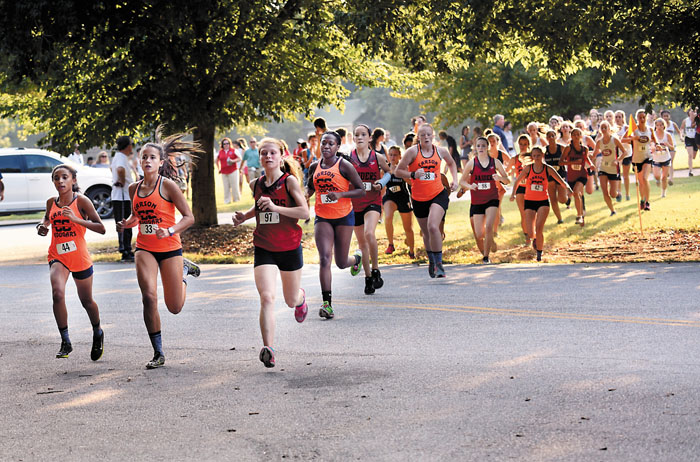 Wayne Hinshaw/for the Salisbury Post ... The start of Thursday’s girls cross country race. Even at the front are, left to right, Taylor Wiggins, Taylor Conrad and Madison Lowery, the eventual individual champion. Conrad ended up in second place.

SALISBURY — Carson’s girls finished Thursday’s Rowan County Championships at Dan Nicholas Park, one by one, pounding along with faces streaked with tears as well as sweat.

Carson senior Taylor Wiggins, the defending champion, was leading the race when her right knee “popped” near the marker for the first mile. Wiggins had to be carried from the course, and that tightened up the team race considerably.

“Taylor Wiggins is the heart of our team, so our other girls picked it up for her,” Carson coach Les-Lee Efird. “They ran for her.”

Efird said Wiggins had her knee checked out just last week and had prepared diligently all week to defend her title. It didn’t work out, but her teammates had her back.

Carson’s team score of 45 edged Salisbury’s 47.  South Rowan, led by individual champion Madison Lowery, had four of the top 12 runners, but settled for third at 52.

Taylor Conrad, a sophomore, was runner-up for the second straight year and paced the Cougars.

“It was a good race — until Taylor Wiggins got hurt,” Conrad said.

Carson freshman Lani Isley was seventh.  Senior Olivia Gabriel was ninth, and Jessie Nichols, another senior, placed 11th. With Wiggins out of the picture, sophomore Kimberly Barrera became a vital runner for Carson, and her 16th-place finish accounted for Carson’s fifth score and was good enough to hold off the Hornets and Raiders.

The top 12 runners are deemed all-county.

Individually, Lowery was the story. She assumed the lead when Wiggins dropped out, and th  junior was a red blur pounding across the bridge near the finish line, almost at a full sprint. She  was clocked in 20:01,  54 seconds ahead of Conrad.

“I’ve gotten better by practicing so much and because I’ve gotten the best coaching I’ve ever had (from Robert Marchinko),” Lowery said. “Winning today means that all the work I’ve put in is paying off. Winning the county — that means a lot to me.”

Lowery is an athlete and has running experience, but she didn’t try cross country for the first time until last year.

She was 12th in last year’s county championships as a rookie and placed third in August’s pre-county meet behind Conrad and Wiggins. But she’s been getting faster every week and has been rolling to victories in her meets in the Central Carolina Conference.

“Confidence is so important for any runner,”  Marchinko said. “Madison’s confidence is growing. She’s started to believe she can be a really good runner.”

Lowery didn’t leave any doubt about that on Thursday.

“She’s improved a lot,” Conrad said. “I respect her for that.”