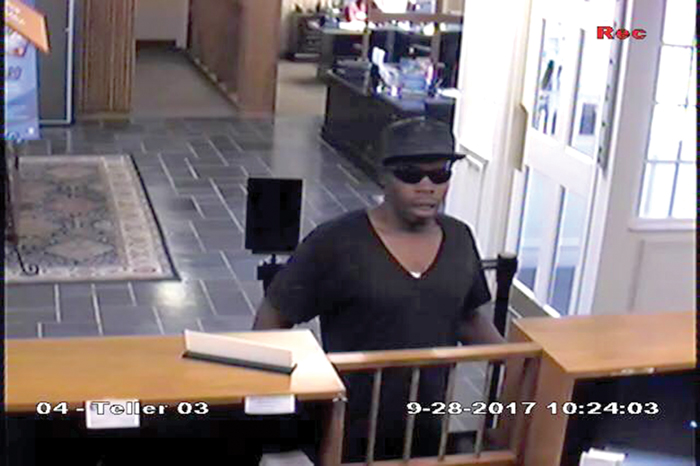 Submitted photo The suspect in the robbery of the F&M Bank on Jake Alexander Boulevard.

SALISBURY — A robber escaped with an undisclosed amount of money from F&M Bank on Thursday.

The robber did not show a gun, but bank employees believed that he was armed, according to the Salisbury Police Department.

The man walked into the bank, located at West Jake Alexander Boulevard and Maupin Avenue next door to Rite Aid, about 10:30 a.m. Thursday and gave a note to a teller.

The note demanded money, and the man took the note back. After he was given money, he walked out the door and got into a white Crown Victoria four-door vehicle. The car was parked in the direction of Mooresville Road, but it’s unclear which way the man was traveling when he left. The car was parked on a side road behind the bank.

No bank employees were harmed during the robbery.

The suspect is believed to be 5 feet 5 inches tall with a medium build. He wore a black T-shirt, white jeans and white shoes. He also was wearing a black baseball cap and dark sunglasses. His face was not covered other than the oversized sunglasses.

The last bank robbery in Salisbury was in November 2014. Police officials say an arrest was made in that case.

Anyone who can identify the suspect or has any information about Thursday’s bank robbery is asked to contact Detective Shane Hill at the Salisbury Police Department, 704-638-5333, or Salisbury-Rowan CrimeStoppers at 866-639-5245. Submitted photo Surveillance video showed this man as the suspect in the robbery at the F&M Bank on Jake Alexander Boulevard.