Pitino put on leave at Louisville 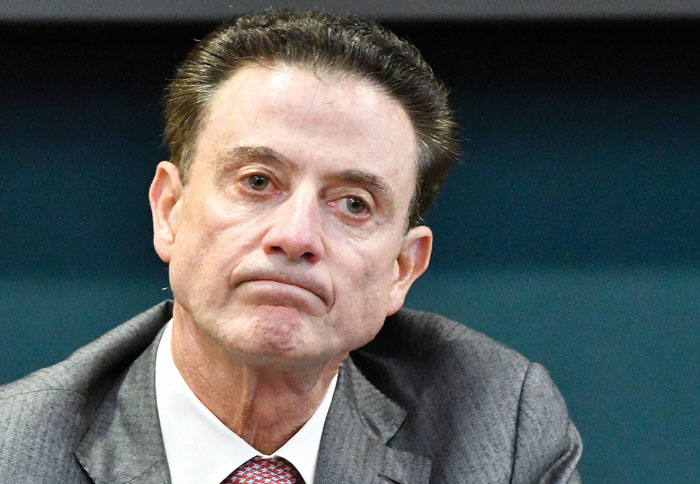 LOUISVILLE, Ky. (AP) — Rick Pitino couldn’t survive another scandal, as an angry interim Louisville president Wednesday placed the head men’s college basketball coach and his boss on administrative leave amid a nationwide federal bribery investigation that has rocked the sport.

President Greg Postel’s decision comes after the school acknowledged on Tuesday that the men’s program is part of a federal investigation into alleged bribery of recruits. The 65-year-old coach was not named in the indictment that resulted in the arrest of 10 people including four assistant coaches at other schools and an Adidas executive.

Postel didn’t stop with Pitino, he also sidelined athletic director Tom Jurich, putting him on paid administrative leave. And though Pitino isn’t officially out of a job — he was placed on unpaid leave — the coach’s attorney, Steve Pence, told the Courier-Journal that Louisville has “effectively fired” Pitino.

“I’m more angry than embarrassed,” Postel said Wednesday at a news conference, adding that an interim coach would be announced within 48 hours. “We will be looking for someone with integrity. … There’s no reason this team can’t have a good season.”

The Cardinals have been winning under Pitino, who has a 416-143 record over 16 years at Louisville, including a 2013 NCAA championship. But there have been continuing off the court issues.

Jurich, who has been at the school for nearly 20 years, has always supported Pitino through many embarrassing transgressions.

But Postel said, “It is vital for this university to strictly adhere to the NCAA rules and of course federal law. Failure to do that would be a tacit endorsement of criminal behavior.”

The recent federal investigation is the latest black eye for the Cardinals program, which is already reeling from a sex scandal. It is unclear where the marquee program goes from here.

Pitino and Louisville are in the middle of appealing NCAA sanctions handed out in June following a sex scandal that unfolded nearly two years ago — which could cost the school its 2013 national title.

In the latest investigation, federal prosecutors say at least three top high school recruits were promised payments of as much as $150,000, using money supplied by Adidas, to attend two universities sponsored by the athletic shoe company. Court papers didn’t name the schools but contained enough details to identify one of them as Louisville, the other was Miami.

Postel also said Wednesday that one student-athlete has been informed he will not practice or play for the university until the investigation is resolved. He did not name the athlete allegedly involved in the investigation, which federal documents list as a high school All-American.

The player’s name also was not released by federal prosecutors, but details in the criminal complaint make it clear investigators were referring to 6-foot-7 Brian Bowen. The freshman has yet to play in a game with the Cardinals.

“This decision will protect the interests of both the student and the University of Louisville,” Postel said.

Pitino’s future meanwhile will be evaluated at a later date, Postel said, while his assistants’ status will be examined by the interim AD. Jurich’s future will be determined by the school’s Board of Trustees.

Though Pitino is not named in the federal documents, the school acknowledged it is under investigation by the FBI.

Neither Pitino nor Jurich were at Wednesday’s news conference, though the coach said Tuesday the allegations came as a “complete shock” to him. In the statement released through Pence, Pitino added he was “committed to taking whatever steps are needed to ensure those responsible are held accountable.”

The nationwide federal investigation includes schools from California to Auburn.

The assistant coaches charged include Chuck Person of Auburn, Emanuel Richardson of Arizona, Tony Bland of Southern California and Lamont Evans of Oklahoma State. Person and Evans have been suspended, and Bland was placed on administrative leave.

But Pitino is the first head coach to be disciplined, and his previous NCAA troubles apparently played a role in him being placed on leave.

As part of the fallout from the sex scandal, Pitino’s program had been ordered to vacate up to 123 victories in which ineligible players received improper benefits — a period that includes the 2013 title, Louisville’s third national championship— along with the 2012 Final Four appearance. The NCAA also placed the school on four years’ probation and ordered the return of money received through conference revenue sharing.

The NCAA noted that Cardinal players and recruits had received improper benefits and called the activities in the dorm “repugnant” in its decision.

Pitino is 770-271 over a 32-year coaching career with stops at Hawaii, Boston, Providence and Kentucky, where he won the 1996 NCAA title. He has also coached in the NBA with the Boston Celtics and New York Knicks.

But that success has been overshadowed by a recent series of embarrassing episodes that began nearly two years ago with escort Katina Powell’s book allegations that former Cardinals staffer Andre McGee hired her and other dancers for sex parties with players and recruits in the team’s dormitory.

Pitino denied knowledge of the activities described in Powell’s book and criticized McGee for his actions. The NCAA’s Committee on Infractions dismissed Pitino’s contention that he was unaware of McGee’s activities and imposed harsher penalties on the program and the coach.

Before the sex scandal case, Pitino had to testify in 2010 in a federal extortion trial for the wife of the school’s equipment manager, when he acknowledged under oath to having an extramarital affair with her in a Louisville restaurant.

But like he did in the sex scandal case, when the federal investigation was announced Tuesday, the coach insisted he was unaware of the activities described in the documents.

However, it was apparently one scandal too many for Postel,  who held both the Hall of Fame coach and the school’s longtime athletic director accountable for the latest blow to Louisville’s reputation.