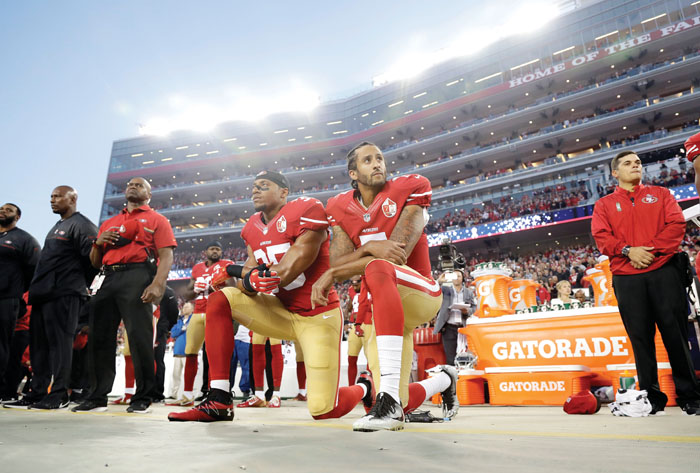 FILE - In this Sept. 12, 2016, file photo, San Francisco 49ers safety Eric Reid (35) and quarterback Colin Kaepernick (7) kneel during the national anthem before an NFL football game against the Los Angeles Rams in Santa Clara, Calif. What began more than a year ago with a lone NFL quarterback protesting police brutality against minorities by kneeling silently during the national anthem before games has grown into a roar with hundreds of players sitting, kneeling, locking arms or remaining in locker rooms, their reasons for demonstrating as varied as their methods. (AP Photo/Marcio Jose Sanchez, File)

What began more than a year ago with an NFL quarterback protesting police brutality against minorities by kneeling silently during the national anthem before games has grown into a roar with hundreds of players sitting, kneeling, locking arms or remaining in locker rooms — their reasons for demonstrating as varied as their methods.

Yet people rallying to defend players or decry the protests aren’t talking about police brutality, or the fact that former San Francisco 49ers quarterback Colin Kaepernick is no longer employed by an NFL team. Especially after President Donald Trump weighed in repeatedly to say that players should stand for the anthem or be fired for their defiance.

Before NFL games began Sunday, the discourse had morphed into a debate over the First Amendment, Trump’s insults, how much the NFL has been paid by the U.S. government for its displays of patriotism and the overall state of race relations in America. Support and criticism came from fields well beyond the gridiron, including NASCAR, the NBA, MLB, activists, journalists, entertainers and politicians.

Some worry that the expanded reasoning for the protests — fanned by the president’s incendiary stance — could dilute the passion and the permanence of its original cause, drawing attention to interactions between police and minorities.

“The issue has morphed beyond that because Mr. Trump has interceded,” the Rev. Jesse Jackson said.

More than 200 NFL players and owners — even anthem performers — found ways to show dissent during pro football games over the weekend. Raised fists and other gestures came after Trump’s comments at a Friday night rally in Huntsville, Alabama, where he mused to the crowd: “Wouldn’t you love to see one of these NFL owners, when somebody disrespects our flag, to say, ‘Get that son of a bitch off the field right now! Out! He’s fired. Fired!’”

Trump continued to criticize protesters Tuesday, saying in a news conference at the White House that he was “ashamed of what was taking place” with the kneeling protesters. Trump said Americans have died and been injured in defense of their country.

Trump’s remarks set off a firestorm on social media. Ken Miles, a community organizer and entrepreneur living in Harlem, created a petition on Saturday around the emerging #TakeTheKnee hashtag in response.

“This weekend was just a reminder of the role that power plays in this conversation,” said Miles, 32. “The president of the United States leveraging his influence to call out players exercising their rights is an abuse of power.”

The topic continued to dominate discussion in sports Monday as NFL players reflected, NBA teams met with reporters and Trump doubled down on his position with tweets, saying the issue had nothing to do with race and using the hashtag “#StandForOurAnthem.”

“He doesn’t understand the power that he has for being the leader of this beautiful country,” Cleveland Cavaliers star LeBron James said.

Trump has rallied those to his side who are less interested in athletes’ opinions than a perceived lack of patriotism. The American Legion has called the protests and protesters “misguided and ungrateful.”

“It wasn’t political when it was written and it shouldn’t be political today,” American Legion National Commander Denise H. Rohan said Monday. “Having a right to do something does not make it the right thing to do.”

“The original issue was police brutality,” said Myles Conley, 42, a sales consultant from Atlanta. “The issue has moved past police brutality. Now it’s … racism in the NFL.”

Conley said fans watch the NFL for entertainment and “now it’s turning into an activists’ platform,” referring to domestic violence, player safety, race and other issues.

“All of these issues the NFL is making part of their program,” he said. “No one wants to hear that.”

Protesters have supporters as well, including NAACP President Derrick Johnson. “This isn’t about football; it’s about freedom,” Johnson said Monday. “It’s about the ability of Americans to utilize their constitutional rights without punitive actions from their employers.”

It’s unclear whether — or how — the momentum will continue. On Monday, Jackson called for a boycott of the NFL — some African-Americans have been doing that since the start of the season earlier this month — and picketing at pro football stadiums.

Some want the original intent of the protests to become the focus again.

Congressional Black Caucus chair Cedric Richmond noted that while some NFL owners, coaches and officials put out statements rebuking Trump, they didn’t include why players originally felt the need to protest.

Jozen Cummings, a columnist at VerySmartBrothas.com, wrote in a column Monday that the #TakeTheKnee movement has evolved into an “all-lives-matteresque, watered-down version of NFL players and owners against Trump.”

“Kaepernick’s cause got distorted into a protest about flags and against Trump when it was never intended to be against anybody,” Cummings wrote. “It was for people of color.”

Miles said that while the support has taken various forms, people are leveraging their platforms to keep issues of systemic racism top of mind.

“Folks are elevating the conversation,” Miles said. “It’s all connected, and there’s a long list of things that have been going on. This is about recognizing that the responsibility is on all of us and there is a role for all of us to play.”

Corey Williams in Detroit and Tom Withers in Cleveland contributed to this report. Williams, Holland and Whack are members of The Associated Press Race and Ethnicity Team. Holland reported from Washington and Whack reported from Philadelphia.

Panthers say Richardson will support them if they protest