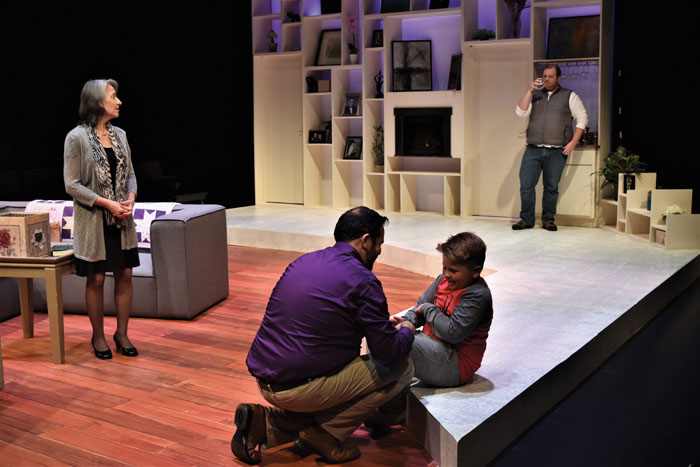 “Mothers & Sons” isn’t for everyone. It is a gripping, emotional play about love, loss, bitter disappointment and the inability to move on after tragedy.

Jean Kadela as Katherine Gerard and Chris Eller as Cal Porter are on stage almost the entire time in this Lee Street theatre production directed by Andrea Rassler. They make the evening worth your while. They are totally believable in their roles and have made the commitment to play it raw, as it should be.

Katherine Gerard is the mother of Andre, who died of AIDS and was once Cal’s partner. Cal has moved on. He’s married now, and he and his husband have a son, Bud. He’s successful and happy in this 11-year relationship. He still thinks of Andre, who was an actor, every day, and he still loves him.

Katherine still thinks of Andre every day, too — with anger, resentment and a sense of betrayal.

When she shows up at Cal’s apartment, with its spectacular view of New York’s Central Park, her agenda is unclear. We find out later she has returned Andre’s journal, without reading any of it. Cal has never read it, either.

Katherine argues about her son and accuses someone of making him gay when he moved to New York at 18. She’s also looking for someone to blame for the AIDS, accusing Cal, naturally, and unwilling to accept that her precious son was not monogamous.

She’s so bitter, and Kadela plays her as a barely contained eruption, refusing to touch Cal or even take off her coat. She’s cold and hot, and her deep, dark eyes flame with anger. It’s got to be a tough role, calling on all those feelings every night.

Eller tries to cheer her up, cajole her, make friends, until he sees that she is implacable, unbending, stuck.

When they clash, and they often clash during the evening, he can rage as much as she can, throwing back at her what she drops on him.

When Cal’s husband, Will Ogden, returns home with their son, Will is angry at her disruptive presence and wants her out. Bud, loving little boy that he is, wants to make friends. Kaulton Kuddie plays Bud with a sweetness and innocence that makes him all boy and very appealing.

Nick Culp as Will is politically correct, a bit scolding to his husband and cold toward this stranger, Andre’s mother. He’s still jealous of Andre, although he and Cal met eight years after Andre’s death.

Katherine is furious that Cal is married to someone else. She’s alone — her son dead, her husband, a man she never loved, dead.

Will points out that she uses the word “hate” a lot. And she owns up to it — she hates her life. She hates Cal and Will’s lives. She hates seeing him happy. She hates gays, hates that the word gay has a new meaning. She will not accept who her son was or what happened to him.

Cal points out she was not there when Andre was dying. She says Andre never loved her.

Katherine is at the edge of a precipice, with her emotions about to push her over the edge. She talks about suicide because she has no one to live for.

Is there any light at all in her dim world? If there is, she refuses to let it in. Can she let go of the hate?

Bud likes having her around, asks her if she could be his grandmother, because he doesn’t have any grandmothers. Can a little child lead them?

This is a gut-wrenching production, with plenty of tears. It is played without an intermission to break the tension. It speaks to the experience of so many of the LGBTQ community. The loss of parental support, even parental love, the loss of loved ones to a disease that ravaged the community in the 1980s, the loss of friends, mentors, colleagues — pains that never heal.

“Mothers & Sons,” written by Terrence McNally, cracks with feelings and provides a glimmer of hope in what is still unfamiliar territory.

To add to the experience, a portion of the AIDS Memorial Quilt is on display at Lee Street theatre, thanks to the efforts of Jon Planovsky and Bob Lambrecht. Ticket holders can see the quilt now through Saturday and Oct. 5-7.

“Mothers & Sons” is sponsored by Hen and John Henderlite, Dyke and Deborah Messinger, PFLAG and Salisbury Pride. Performances are tonight, Friday and Saturday and Oct. 5-7 at Lee Street theatre. For tickets, go to www.leestreet.org or call 704-310-5507.