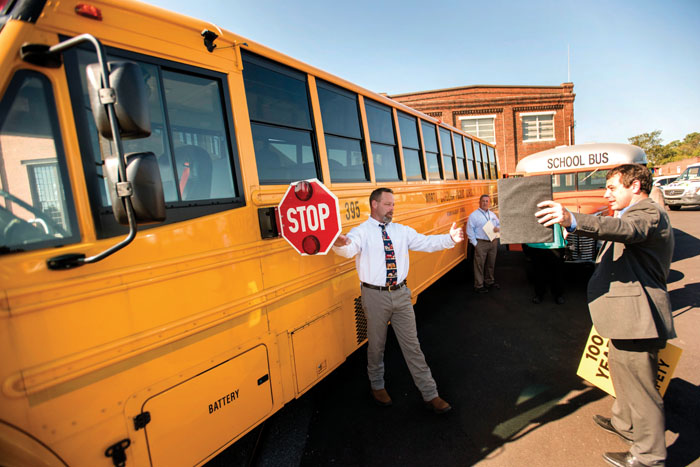 On Sept. 5, 1917, a superintendent in Pamlico County had a dream that would level the playing field for poor, rural students: transportation. He purchased a vehicle — little more than a truck — that became the state’s first school bus.

“This innovation led to a transformation of education in North Carolina,” Eezel said Wednesday.

An ability to travel between schools effectively ended the era of one-room school houses and paved the way for larger schools, grade-level focus and wider course offerings.

“(School buses) have also been a great equalizer for kids,” Eezel said.

Free transportation to and from school is part of what allows for fair and equitable education for all students, he said.

Wednesday’s news conference was a chance to look back on the history of the school bus — from that 30-passenger truck to the yellow behemoths that drive the road today.

Mark Brown, communications director with the Transportation Museum, said he was happy for the opportunity to haul out the museum’s 1940 Thomas Built Bus, which is painted a cheerful orange instead of yellow.

“That is one of the cool things about transportation,” Brown said, “is that you get to see the evolution of these buses. … Transportation is history, and it is the way we move about and make history.”

But with schools just a month in session, it was also a chance to talk about school bus safety.

These days, more than 13,000 North Carolina public school buses ferry 780,000 students along more than 1 million miles of road each day. And students are 70 times more likely to arrive to their classroom safe and sound riding a school bus than they are by walking, riding a bike or riding in a personal vehicle.

“School bus transportation has now become the safest way for students to get to school,” Eezel said.

And it’s still evolving. Rowan-Salisbury Schools Transportation Director Tim Beck said that 22 district school buses are now equipped with seat belts, and eight buses have an extended stop arm with cameras to help identify vehicles that pass them illegally. Each of the district’s 185 buses has interior cameras, and Highway Patrol officers frequently follow bus routes or ride inside with students.

But as safe as officials can make buses, it’s what happens outside them that they have to worry about. Even one child struck by a distracted driver’s vehicle is one too many.

“Each and every one of us has the power to ensure these tragedies don’t happen,” said Gary Sims, the N.C. Division of Motor Vehicles’ school bus and traffic safety district supervisor.

Each year, North Carolina has roughly 3,000 incidents of people passing a stopped school bus. According to Sims, roughly two-thirds of all school bus accidents are caused by illegal passing.