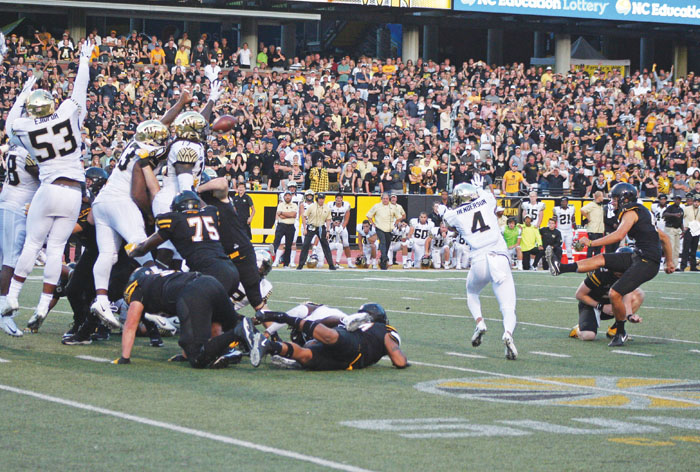 Wake Forest players attempt to block a game-winning field goal attempt by Appalachian State's Michael Rubino (41) in the final seconds of the second half of an NCAA college football game in Boone, N.C., Saturday, Sept. 23, 2017. The kick was no good. Wake Forest won 20-19. (AP Photo/Sarah Newell)

WINSTON-SALEM (AP) — Wake Forest and Duke have never both been this good this early.

For the first time, the Demon Deacons and Blue Devils are each 4-0 in the same season.

The Tobacco Road rivals with similar profiles as small, private, academically elite schools are savoring the success that in the past has often been an either-or — if not a neither-nor — proposition.

Wake Forest receiver Scotty Washington called it “very cool” for both teams to be unbeaten and appropriately named teammate Duke Ejiofor added that “we’re going to try to keep our streak going.”

Both teams are preparing for their biggest tests so far, with visits this weekend from Florida-based powers who were the preseason picks to win their divisions: Duke plays host to No. 14 Miami on Friday night in search of its second Atlantic Coast Conference victory, while Wake Forest welcomes surprisingly winless Florida State on Saturday.

“Build on it — hopefully, it builds into the next one,” Duke coach David Cutcliffe said. “We’ve got an opportunity to win our fifth game in our fifth game. Everybody would like to say that. Doesn’t mean anything, other than that’s an opportunity. … I don’t look back, but it lets you look forward at No. 5. That’s a lot more exciting than trying to get No. 1, right?”

And both of them needed big non-offensive plays to remain undefeated, with the Demon Deacons blocking a field goal to preserve a 20-19 win over Appalachian State on the same day the Blue Devils returned an interception 61 yards for a game-sealing touchdown against North Carolina.

At Wake Forest, the offense has finally caught up with a defense that in recent years was forced to carry the team. The Demon Deacons are averaging nearly 38 points after ranking last or next-to-last in the ACC in scoring in each of the past three years.

“Offensively and special-teams wise, we’re doing a pretty good job,” said Ejiofor, a defensive end. “Our offense, we have a lot more explosive players, a lot more talent. … Defensively, I think we’re doing well up front. … We’re doing well just staying locked in and following the game plan coach has for us.”

The Blue Devils boast one of the nation’s best defenses, ranking second in the FBS against the run and best in the league in turnover margin, to go along with an offense that continues to hum, averaging 40.5 points and 470 total yards.

It’s added up to a pair of successful starts for the Tobacco Road rivals that merit at least a footnote in the schools’ record books.

The Demon Deacons have opened with four straight wins for the second straight year , but this is still only the sixth time in school history they’ve done it.

The Blue Devils, meanwhile, are 4-0 for the 17th time, but the vast majority of those came before 1970, and they were considered one of the worst power-conference programs — if not THE worst — before coach David Cutcliffe arrived a decade ago.

These two always seem to ebb and flow in opposite directions.

Not only have Wake Forest and Duke never gone to bowl games in the same season, they’ve both finished with winning records only four times since the ACC was formed in 1953.

It hasn’t happened since 1988 — when the Blue Devils went 7-3-1 under Steve Spurrier and the Demon Deacons were 6-4-1 behind Bill Dooley.

While Wake Forest made its school-record run of three straight bowl appearances — including a 2006 ACC title and an Orange Bowl berth — the Blue Devils floundered, winning one game in Ted Roof’s final two seasons.

Then, when Duke enjoyed its renaissance earlier this decade, reaching four consecutive bowls and winning the 2013 Coastal Division title under Cutcliffe, the Demon Deacons were ushering out coach Jim Grobe and finding their footing under Clawson.

With two months left in the regular season, only one thing is certain — they won’t both finish undefeated, because Duke visits Wake Forest on Nov. 25 in the finale.

It’s still early, of course, but a rematch the following week in Charlotte — in the ACC championship game — isn’t entirely out of the question yet.

“It’ll be cool to see how they progress this season,” Washington said. “And obviously, we meet up later in the season. … Maybe, possibly (twice). That should be fun.”