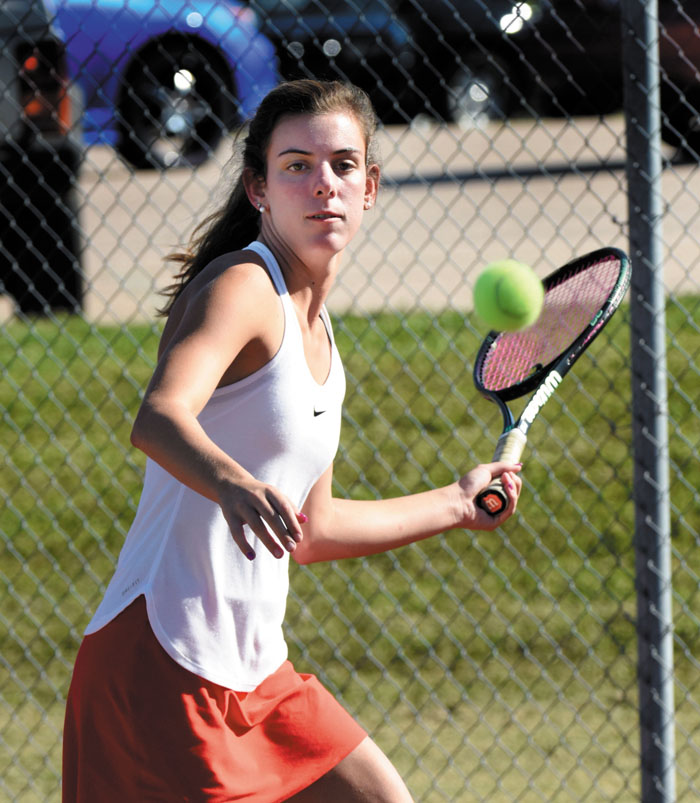 Wayne Hinshaw/for the Salisbury Post ... Maria Capito plays No. 1 singles for Salisbury, a 9-0 winner over Ledford on Wednesday afternoon. The Hornets remained unbeaten in the Central Carolina Conference, their 170th straight league victory. Salisbury is 15-1 overall, losing to 3A Concord.

SALISBURY — Early in the 2002 season, Lexington beat a Salisbury team with four rookies in the lineup at the Bingham Tennis Center to snap a string of 126 straight Hornet victories in conference play.

The rematch was scheduled for Sept. 30, a Monday, and Salisbury’s senior leader and No. 1 player Kristy Woodson had her young teammates practicing on Sunday, preparing for the match.

Salisbury took leads in all six singles matches at City Park but won only at No. 1 and No. 2. When the Hornets fell at No. 6 singles in an unbelievable match that lasted 2 hours, 25 minutes, they were doomed. The Hornets lost five tiebreakers that day, and they lost, 5-4, to the Yellow Jackets. Chris Myers, who coached the Hornets then, made no excuses. He said that losing five tiebreakers didn’t indicate bad luck — it just meant that the better team won.

What makes all that relevant to today’s Hornets is that two days after those tiebreakers turned into heartbreakers against Lexington, on Oct. 2, 2002, Woodson, Allison Somers and their teammates went out and started a new Central Carolina Conference winning streak against a stout Ledford team. That streak is still going, handed down, racket by racket, for almost a generation.

The Hornets have fine courts at their school now, and when they beat Ledford, the second-place team in the CCC, on Wednesday, 9-0, things had come full circle. Salisbury now has won 170 in a row in conference play, and that’s 306 wins in their last 308 league matches, including stints in the South Piedmont Conference and the Yadkin Valley Conference.

“I don’t know that our girls are aware of all the history and all the streaks,”  Salisbury coach Milton Griffith said. “But our girls do know that we have a winning tradition. We’ve added a lot of good young players and we have a very good team this year. We’re deeper.”

Some of the current Hornets are younger sisters of players who won championships and kept the streak going. Capito, Honeycutt, Rusher — those are all familiar surnames.

“We’ve got eight solid players and we’ve had a good season,” Ledford coach Andy Myers said. “But we came to Salisbury and ran into a buzz saw.”

Salisbury freshman Emma Nianouris had the longest match at No. 3, but she still won with relative ease, 6-3, 6-0.

Senior Bethanie Stauffer had the distinction of clinching the match. Her 6-2, 6-1 victory at No. 6 gave the Hornets an insurmountable 5-0 lead.

Senior Maria Capito, playing No. 1 for the Hornets again this year, has been automatic in league matches. She romped 6-1, 6-0 on Tuesday. Capito is a special athlete. She has a shot at 1,000 career points in basketball and she also excels in soccer.

Julia Honeycutt and Lilly Rusher are soccer-first athletes who play club ball. When their schedule permits, they play No. 2 and No. 4 for SHS tennis. Both were on hand on Wednesday. Neither of them lost a game. If they’re not available, players can move up a seed or even two with no problem.

“We’ve got three really good freshman in our top six, and we’ve had (senior) Julia (Honeycutt) for a lot of the matches, so we’re definitely much stronger than we were last year,” Capito said. “I’ve been playing a lot of weekend tournaments, trying to stay in tune for the state playoffs, but our league also has challenged us  more this year with schools like North Davidson and Ledford coming into our conference. I like it when we play the competitive teams like Ledford. That’s when I play my best.”

Most of the serious competition on Wednesday came in doubles. After blitzing the Panthers in singles, the Hornets had to scrap for the doubles wins.

Capito and Nianouris won 8-4 at No. 1 singles. Skye Mowery and Rachel Seifert, two more good players, won  8-6 at No. 3 doubles. The last match on the courts was the tight No. 2 doubles match.

When Salisbury beat Ledford, 8-1, in late August, the  Hornets’ lone loss came at No. 2 doubles, with Stauffer and Burton falling. But they were determined not to lose to Ledford again and rallied to win, 8-6. It was friendly, but it was intense, with spectators applauding almost every point.

“I felt comfortable at the net today in singles and doubles,” Stauffer said. “I just kept winning a lot of points at the net. We lost a close one to them the first time, but today we won a close one.”

Griffith, who played football at North Rowan High and Livingstone College, is a counselor at Salisbury. He understands the psychological aspects of the game as much as the strokes. He was delighted to see Stauffer and Burton adopt a refuse-to-lose mindset, even though their match wasn’t going to affect the big picture.

“They dug deep today, and that’s exactly what I wanted to see,” Griffith said. “That’s the kind of toughness we’ll need in the playoffs.”

The next serious challenge for the Hornets will come from North Davidson on the Salisbury courts on Oct. 2., the 15th anniversary of the day the CCC streak began. Capito said the Hornets surprised North Davidson the first time. Coming down from 4A, the Black Knights had no idea what the Hornets were like, but this time North Davidson will be ready. Things could be tougher.

“We’ve been playing three conference matches a lot of weeks, so we’ve stayed busy,” said Stauffer, who is still unbeaten in singles. “But I like to play a lot, and now we’re in a conference where we have a lot of chances to measure ourselves against good teams.”

They’ve measured up well in the new, improved CCC. The Hornets are still putting the buzz in buzz saw —170 times in a row.