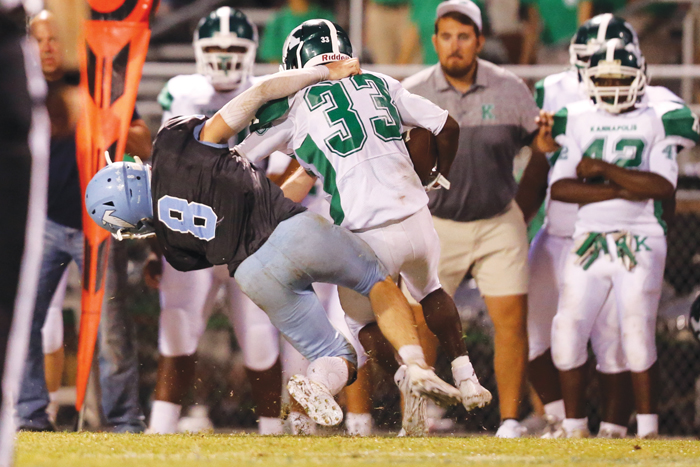 James Sipes/for the Salisbury Post ... West Rowan outside linebacker Brandon Wallace (8) brings down A.L. Brown’s Nick Lyerly (33) from behind for a loss on the play, during the game on Sept. 15.

MOUNT ULLA — On one of the many punts at Concord’s Bailey Stadium, West Rowan’s 5-foot-10, 160-pound Brandon Wallace found himself lined up across from Concord defensive tackle Rick Sandidge, a four-star recruit who stands 6-5 and weighs 275.

Wallace was awed by Sandidge’s size, but he lived to tell about Friday night, and so did the Falcons. There were times when the odds seemed insurmountable, but West Rowan rallied from a 9-0 halftime deficit to beat the Spiders, 12-9.

“We had a 1-3 record, we’re down at the half, on the road, and we’re playing against a good team with a great defense,” West Rowan coach Joe Nixon said. “But our guys found a way to win. That spoke volumes about their character.”

Wallace, as he almost always is, was in the middle of everything positive that happened for West. Playing the drop end position, he made 14 tackles.

The drop end has multiple responsibilities, and while Wallace, who is West’s surest tackler, is basically a run-stuffing outside linebacker against teams that move on the ground, he’s also responsible for covering short pass routes on his side of the field.

“Drop end isn’t an easy position to learn, but I’ve been playing there for the last three years,” Wallace said. “You always play the run first, but you’re also playing the pass.”

Except for his relatively small size, Wallace is the spitting image of what his father, William, looked like in West blue in the early 1990s.

About 50 pounds smaller than his father was in his heyday, Brandon, wearing a sleeveless T-shirt and with dark hair combed back like the early 1960s version of Elvis, could pass for an extra from “Grease,” but looks can be deceiving. In appearance, style, language and fearlessness, Wallace is remindful of former South Rowan star Brad Lanning, a holy terror at safety in  the late 1990s.

“Brandon is a football player, just a football player,” Nixon said. “He’s got good speed, and he’s physical. He’s critical for us and plays so many snaps for us, and that’s on special teams as well as on defense. He’s on the kickoff team, the punt team and the punt return team.”

Wallace made a name for himself last season when he was second on the team in tackles, trailing only linebacker L.J. Robinson, co-county player of the year. Wallace just has a knack for getting people on the grass, whether they’re 190-pound running backs or 215-pound tight end. His staggering tackle totals made him a first team all-county player.

West experimented with using Wallace as a conventional linebacker early in the season but made the decision to return him to drop end. That gives the Falcons three players on the defensive side — Wallace, DB Malcolm Ingram and lineman Devin Turner who have been doing the same job for a long time.

Down 9-0 at Concord after a fierce first half, the Falcons retreated to the locker room for adjustments.

“We came in knowing Concord had very good running backs,” Wallace said. “We knew we had to stop the run and put them in situations where they’d have to throw.”

West was almost stopped on its critical first possession of the first half, but the offense converted a third-and-long and took advantage of a roughing the passer penalty. The first of Payne Stolsworth’s two TD passes cut the deficit to 9-6, and then  West’s defense took the field for its biggest series of the night.

“We knew we needed to shut Concord out in the second half to give our offense a chance to come back,” Wallace said. “We go into every game with the goal of holding our opponent under 14 points, and we believed we could do that. We made the right calls on defense and played our base defense the whole second half. The main thing was how hard we played, and we had offense and defense working together, feeding off each other, the best that we’ve done that all year.”

West scored again, and led 12-9. There was a long, long way to go, but the Falcons dug in and kept getting stops. Turner blocked a field goal. He also had a big sack that forced a long field-goal attempt that was missed.

“In the second half, our defense played about as well as they can possibly play,” Nixon said. ” The last five minutes we were able to run the ball and we kept it away from Concord. Just a big-time win for us.”

“Concord is a very explosive team,” Wallace said. “Shutting them out in the second half, that was huge for us.”