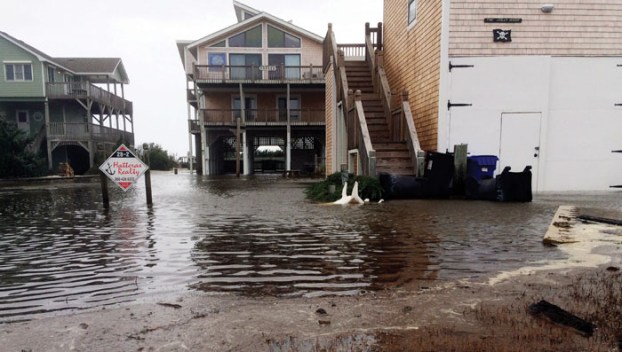 More than 10,000 visitors were told to leave the North Carolina barrier islands of Hatteras and Ocracoke, but the evacuation orders didn’t apply to local residents. They are now resigning themselves to economic losses as well as more flood damage after repeated poundings by tropical weather.

Sarah Midgett lost her car during Hermine and her home was severely damaged by Matthew’s floods last year. Jose then hit the dunes this month, and Maria pushed through the weakened natural barrier, washing over parts of Hatteras.

“It’s insane how much the beach has eroded,” said Midgett, who moved many of her belongings off her floor, just in case.

Scientists say Maria is expected to erode more than half the dunes along North Carolina’s 300-mile coast. Beaches in Maryland and Virginia could fare even worse, with two-thirds seeing erosion and the ocean washing over a third of their dunes, according to the U.S. Geological Survey.

In the town of Waves, kite-surfing instructors lost a solid week of reservations after tourists had to evacuate. Adrienne Kina, who normally works as a saleswoman at REAL Watersports, says this storm “is going to screw” the locals again after a dayslong power outage this summer sent 50,000 tourists packing and cost the Outer Banks millions in lost tourism income.

Maria’s top sustained winds dropped Tuesday to near 70 mph, ending a nine-day run as a hurricane.

The center remained far offshore, centered about 160 miles east-southeast of Cape Hatteras, North Carolina, and moving north at 7 mph. Still, a tropical storm warning was in effect for the North Carolina coast from Bogue Inlet to the Virginia border, and meteorologists predicted a storm surge for Ocracoke Inlet to Cape Hatteras.

Hurricane Lee, meanwhile, was gradually strengthening on a course to remain far from land.

The Federal Highway Administration is assessing road damage to facilitate federal money to fix them. The TS Kennedy, a former commercial freighter used by the Maritime Administration for training, is moving from Texas to support the recovery in Puerto Rico and the U.S. Virgin Islands.

The Federal Transit Administration is helping restore ferry service, which has been available only during daylight hours to transport emergency supplies to Vieques and Culebra.

Because Maria destroyed or disabled critical radars and navigational aids, the FAA said it has been bringing in replacement systems by air and by sea to restore essential radar, navigation and communication services. A long-range radar in the Turks and Caicos returned to service on Monday morning, giving air traffic controllers a much better picture of planes and helicopters in the region, but technicians were still using chain saws to cut a path through a mountainous rainforest to reach and restore a second long-range radar site at Pico del Este.

Hyde County officials said they had about 700 visitors when the evacuation was ordered at Ocracoke, which has about 1,000 permanent residents.

Some of the tourists drove off Monday after only one day of their weeklong vacations.

On Hatteras, Jay Wrenn and his wife packed up for a five-hour drive back home to Burlington, North Carolina. They had arrived at their rented cottage in Rodanthe on Sunday with a week’s worth of groceries. By noon Monday, the macaroni salad they made was in the trash.

SALISBURY — As the day turned to evening, a group of about 20 ministers, city leaders and residents gathered on... read more