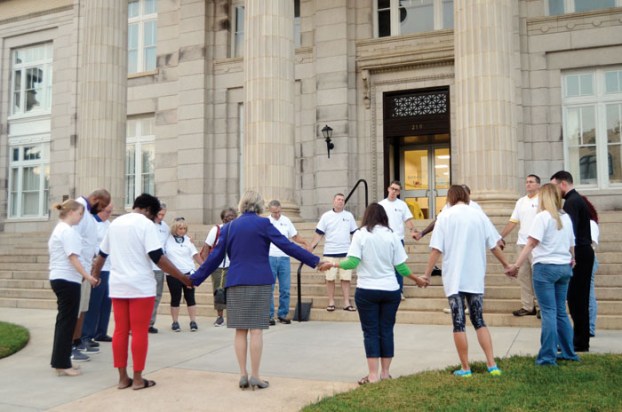 Local ministers, leaders and citizens have formed a group that will host an event, Pray Rowan, where they will gather on the steps of the courthouse Oct. 7 to pray. The group met recently to discuss final plans for the countywide event. Shavonne Walker/Salisbury Post

SALISBURY — As the day turned to evening, a group of about 20 ministers, city leaders and residents gathered on the steps of the Rowan County Courthouse to do one simple thing — pray.

The group, which was born out of a desire by Tonya Skelly and Father Lucas Rossi of Sacred Heart Catholic Church to have a place to pray for the community and leaders, has become known as Pray Rowan.

Skelly, a development associate with the Billy Graham Library, started with a June prayer breakfast that included local leaders, pastors and their wives. She wanted to appeal to those assembled to ask them to pray and encourage others to do so as well. She told them that God had placed in her heart the need to have a prayer event.

The group is made up of 25 to 30 people and has five committees that have met biweekly since July. There is no specific denomination at the center of the group or specific church affiliations. It open to anyone who wants to be a part of a prayer movement. Meetings are held in different churches throughout the county.

“It’s just about God’s people coming together loving the community and encouraging the community. It’s a group of people understanding the power of prayer,” Skelly said.

The goal is to work toward a prayer gathering about the same time each year.

Skelly said the group’s members don’t want to involve only ministers but members of their congregations and local youths as well.

She was inspired by Franklin Graham’s Decision America Tour, which began in 2016 with stops in all 50 states for one-day evangelistic and prayer rallies.

Skelly and Rossi met with Mayor Karen Alexander to get ideas of where to hold the event but left with an even bigger idea to open it to churches and all residents of Rowan County.

Rossi said in early spring he was compelled by the Holy Spirit that there needed to be a great movement of prayer in the city.

He thought it was to have a rally for peace and healing to reach out to Christians, but it developed into a prayer gathering.

“The county has suffered so much in the past few years,” Rossi said.

“What is going to change the situation is prayer,” he said.

The prayer event isn’t against any particular issue, “it’s simply a gathering to pray,” Rossi said.

He said this movement of God is bigger than any of them. He knew Skelly from the Franklin Graham Decision Tour. They discussed if something similar should be done locally.

Rossi said he’s personally been so blessed to be summoned by God to be with these brothers and sisters in Christ, “my life has been enhanced because of it.”

Dr. Henry Diggs, pastor of Faith Temple Triumphant Ministries located in East Spencer, attended the breakfast and immediately was on board with the idea to meet corporately to pray.

“We talked about a need for the community to gather to pray. I believe prayer changes things. I believe in the power of prayer,” Diggs said.

He said there is so much reaction from the community after an incident occurs, but they are, “partnering with one another and uniting our hearts in unified form.”

Diggs said some people pray but don’t really believe God will answer petitions made to him. But members of Pray Rowan believe their prayers will be answered.

Blake Maxwell, an associate youth pastor at Nazareth Community Church, has been reaching out to young people in area schools to invite them to join Pray Rowan. He is also the Rowan coordinator for Youth Commission International Club, which is in 13 to 14 area schools.

Youth Commission clubs are student-led gatherings on middle and high school campuses where students pray and study the Bible.

Visit Facebook and search @prayrowan or prayrowan@gmail.com for more information.