Leonard Pitts: So black athletes have forgotten their place? 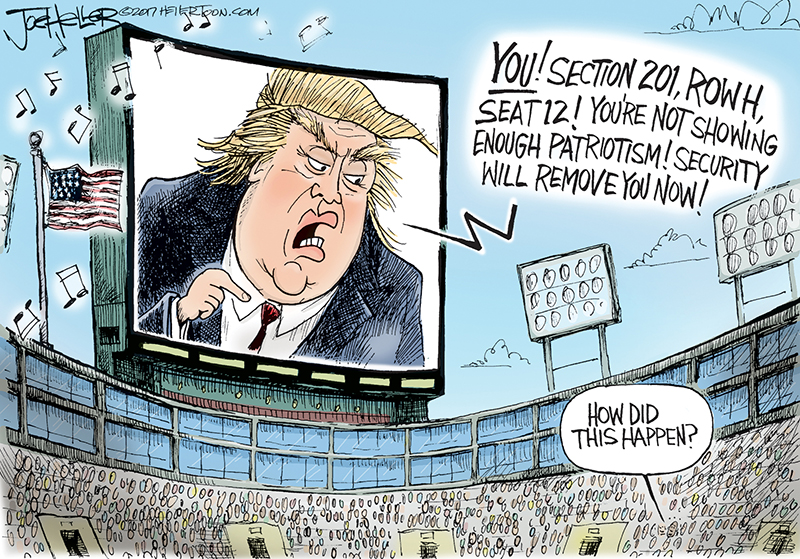 I guess we’ve messed up again. Seems like we’re never going to learn how to properly protest, no matter how hard conservatives try to teach us.

When there was violence in the streets over unpunished police killings of African-American men, they said that was the wrong way to go about it. Most of us agreed.

But when peaceful street demonstrations took place, conservatives didn’t like them, either. Then, last year, NFL player Colin Kaepernick hit on the idea of sitting through the national anthem.

But conservatives said that was disrespectful to veterans. So Kaepernick started taking a knee instead. Many others followed suit.

Conservatives said that was still wrong and Kaepernick has since found himself blacklisted. Then came last week: Donald Trump took time out from comparing missiles with Kim Jong Un and ignoring Puerto Rico to declare that the athlete who takes a knee is a “son of a b—-h” who should be fired for disrespecting America. He was harder on the athletes than on the neo-Nazis who marched in Charlottesville.

Meantime, some observers, including television personality Geraldo Rivera, have griped that politics has no place in sports. Conservatives made similar arguments about comic books when Marvel unveiled a black Spider-Man, and about music when Beyonce performed “Formation” at the Super Bowl.

Me, I’d thought politics was woven into all forms of human expression. I’d have sworn it’s been a part of sports since at least 1910, when a black boxer named Jack Johnson knocked out a white one named Jim Jeffries and white people across America rioted in outrage. I thought it had been part of comics since at least 1941, when Captain America decked Adolf Hitler, and of music since at least 1939, when Billie Holiday sang “Strange Fruit.”

I guess I was mistaken. When Holiday sang “Strange Fruit,” she must have meant kumquats.

There were other criticisms, too. Some said that black men who have been “given” the “privilege” of making big money playing sports, should show proper gratitude to the country before criticizing it. Me, I was unaware there was a requirement that rich guys thank America before griping about it.

Does Trump know this? Because he complains about America a lot and he’s rich. Or, so he says.

Newt Gingrich was downright offended at “arrogant young millionaires” claiming to be oppressed. Apparently, there is something about having money — unknown to us, but not to him — that keeps cops from shooting you while juries look the other way. Did the cop who murdered Tamir Rice remember to ask for a bank statement first?

Anyway, in light of their immunity from racist mistreatment, Gingrich thinks these rich black men are, well … uppity for acting as if they have a right and reason to protest. They’ve forgotten their place.