Catawba Football: Floyd’s return has been big for Indians 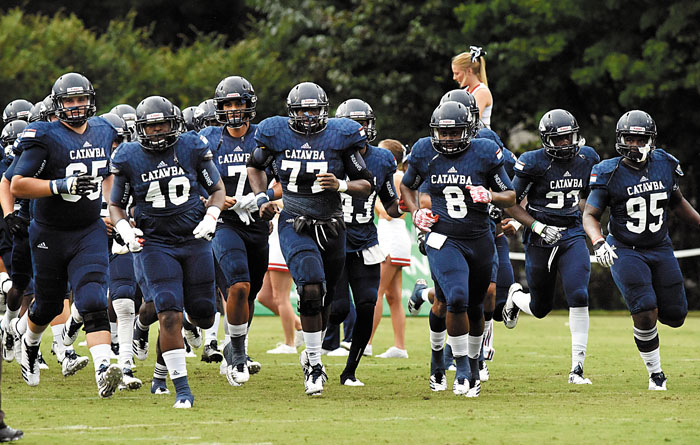 Wayne Hinshaw/for the Salisbury Post ... Catawba offensive lineman Brandon Floyd (77), a senior, leads the team onto the field, prior to the season opener against St. Augustine’s on Aug. 31.

SALISBURY —  Two right knee surgeries haven’t stopped senior Brandon Floyd, Catawba’s starting left tackle, and his return to prominence and dominance is one of the reasons Catawba is 4-0 and has moved up to No. 23 in the national Division II poll.

“That was one of those devastating knee injuries, an injury that has put a lot of guys down for good,” Catawba head coach Curtis Walker said. “He came back from it.”

Floyd (6-4, 250) missed the entire 2015 season. Then his initial comeback lasted just two games.  Injury No. 2 occurred early in the 2016 season, the home loss against Winston-Salem State, and Floyd was staring at another long, empty year on the sidelines.

“The injuries to the right knee were very tough,” said Floyd, an articulate 22-year-old sports management major. “Both comebacks were hard processes, especially that first one after I tore the patellar tendon. When you’re hurt, you gain weight and you lose speed.”

But Floyd has come back a second time.

His tough-mindedness can be traced back to the adversity he faced as a youth. His father, Sammie, died from a heart condition when Floyd was just 5 years old.

That can be a great excuse to get into trouble or to shrug off school work, but that was never the case for Floyd. His mother, Shirley, supplied the role model that kept him on track as far as character and academics. And Floyd was fortunate to have two older brothers who were outstanding football players. Rosario “Torrey” Hailey starred at North Carolina A&T in the late 1990s and was briefly with the Philadelphia Eagles. Lamont Floyd played on the defensive line for Wingate’s South Atlantic Conference championship team seven years ago.

Brandon struggled at football at first, but those big brothers taught him technique and skills and bought him the weights that built up his body. He made so much progress that he was getting Division I offers by his junior season. East Carolina was the first to offer.

Floyd played at South Mecklenburg High, one of the state’s largest schools. but the football teams weren’t very strong.  The Sabres took lumps in a stout 4A league with schools with power and tradition such as Butler and Independence. South Meck lost 17 of 23 games his junior and senior seasons, but Floyd still stood out. Charlotte offered. Appalachian State was considered the frontrunner for Floyd after he visited Boone. Western Carolina, Old Dominion, South Carolina State and Shaw also recruited Floyd.

Walker was hired as Catawba’s head coach in December, 2012, with National Signing Day two months away. Catawba was desperate for offensive line help. Floyd had been on the recruiting list for Western Carolina, where Walker had been the defensive coordinator for a year.

Catawba was Division II, but it offered immediate playing time and it offered closeness to Floyd’s mother in Charlotte. A lot of people were stunned, but on National Signing Day, Floyd picked the Indians.

Floyd proved as good as advertised. In 2013, he started seven games for Catawba as a true freshman. As a sophomore in 2014, he started all 11. He was beginning to be recognized as an All-SAC caliber player when the injuries struck.

Now, as a fifth-year guy, he’s one of the deans of the team, a veteran who has been around almost as long as Walker. He’s been good in the classroom and good as far as representing Catawba in the community.

“Our whole offensive line is playing great right now,” said running back Eamon Smart, who enjoyed  a career day with 30 carries for 147 yards in Saturday’s 37-13 romp against Mars Hill.  “But it’s great to have a leader on that line like Brandon. He’s been around a long time. He’s seen the ups and downs.”

Floyd has learned as much from his injuries as his successes.

“In my younger days here, I was playing at more than 280 pounds, but I’m playing now at 250,” Floyd said. “Losing weight has helped my agility a lot and I actually feel stronger than I did when I was playing heavier. Everything feels great, my knee feels great, and I just want to stay healthy and enjoy my last season. Believe me, 4-0, feels good to everyone.”

“Honestly, he puts us through hell from Monday through Thursday,” Floyd said with a laugh. “But on Saturdays, it’s been paying off. The offensive line is the core of any  football team, and we’ve come together and played as a unit very well so far.”

Catawba’s defense is a given, and the offense has been an equal partner this season. Catawba has a top-50 offense nationally after four weeks, averaging 430.3 yards per game. More than that, it’s been a well-balanced offense — averaging 249.5 passing yards and 180.8 rushing yards.

If you’re able to establish the run, you can usually throw the ball as well. That’s been the case for the Indians, who had 465 yards against Mars Hill, with 251 on the ground. Catawba can take whatever a defense gives.

“Our zone plays and power plays were all working great on Saturday,” Smart said. “The line was just great.”

There’s no better feeling for an offensive line than grinding out the clock on the ground. That was the case against Mars Hill. Catawba got the ball with four minutes left. The Lions never saw it again.

Catawba faces the challenge of an aggressive Carson-Newman defense on the road this Saturday, but Walker expects more serious work from Floyd and the offensive line.

“Brandon has recovered well from  the injuries and he’s tough physically and mentally,” Walker said. “He’s a bright young man who communicates well with everyone. He’s going to be very successful in the business world, and we’re  lucky to have him as one of our leaders.”