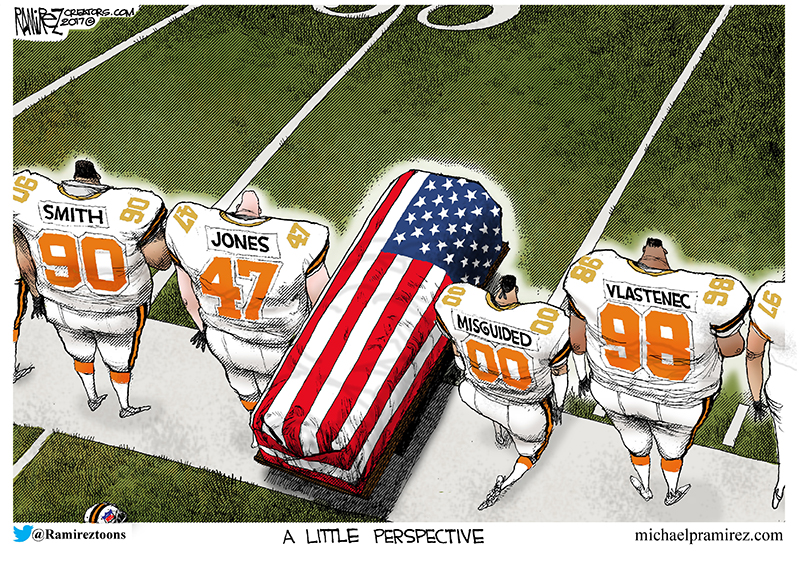 If you like professional sports, a major reason — perhaps the reason — you attend games, or watch them on TV, is that it helps you escape from whatever occupies your mind the rest of the week. You certainly don’t want the issues of the day encroaching on your enjoyment.

The recent exchange of insults between President Trump and some in the National Football League was the latest indication that there is no safe place remaining where one can hide from politics.

The game in London between the Baltimore Ravens and the Jacksonville Jaguars was doubly offensive because of the many players who knelt down in protest when “The Star Spangled Banner” was played, but stood for the British national anthem, “God Save the Queen.” Were they unaware of Britain’s slave trade history?

Football is a sport, but it is also a business. Fans pay big money for tickets, gear, parking and overpriced food and drinks. They have put up with a lot to root for their favorite teams, but these protests, which many regard as disrespecting America and the flag, may have exceeded their high tolerance level.

The players say they are “taking a knee” to protest police brutality inordinately targeted toward African Americans. It is this systemic racism, this inequality that they are attempting to bring into public view. It’s a right cause, certainly, but perhaps the wrong arena? These players should first consider who is responsible for their unequally high salaries. Where else could most of them earn that kind of money? If fans stop coming to games and watching them on TV, the unique covenant between player and fan will be broken, perhaps forever.

Sunday night games on NBC usually attract a large number of viewers. Last week’s game between Washington and Oakland, according to an ESPN report, “was the lowest-rated Week 3 game from metered markets since 2006. … Preliminary television ratings for the nationally broadcast games Sunday on CBS, Fox and NBC were down 1 percent, 16 percent and 11 percent, respectively.”

Fans of the Washington Redskins, who are historically loyal, booed players for kneeling and locking arms during the national anthem. Don’t these players realize they are killing the golden goose?

NBA star LeBron James called President Trump a “bum” for suggesting that protesting players be fired, but this controversy has been a long time coming and what’s happening with the NFL is symbolic of something deeper.

Many are fed-up with being told they have to tolerate everything they don’t believe in. They are sick of being called names for upholding values that have served the nation well. They see President Trump as championing those values, however short he’s come in practicing them. They believe he loves America as they do and are willing to forgive behavior they wouldn’t tolerate in anyone else.

The president has called for a boycott of NFL games, if these demonstrations continue. One already sees a lot of empty seats at some games. Part of it may be that people don’t want to support perpetual losers, but it may also be that fans don’t want politics in sports.

In a football game, a penalty is imposed for unnecessary roughness. This current roughness is unnecessary.

The president has made his views clear. After many players refused invitations to come to the White House, the president disinvited them from the traditional ceremonies. The NFL continues to stand — for now — with its players. Maybe what’s needed is something like President Obama’s “beer summit,” with players, fans and the president talking to each other instead of hurling insults. Other solutions might include players staying in the locker room during the national anthem, as the Pittsburgh Steelers did, or perhaps to cut the anthem altogether.