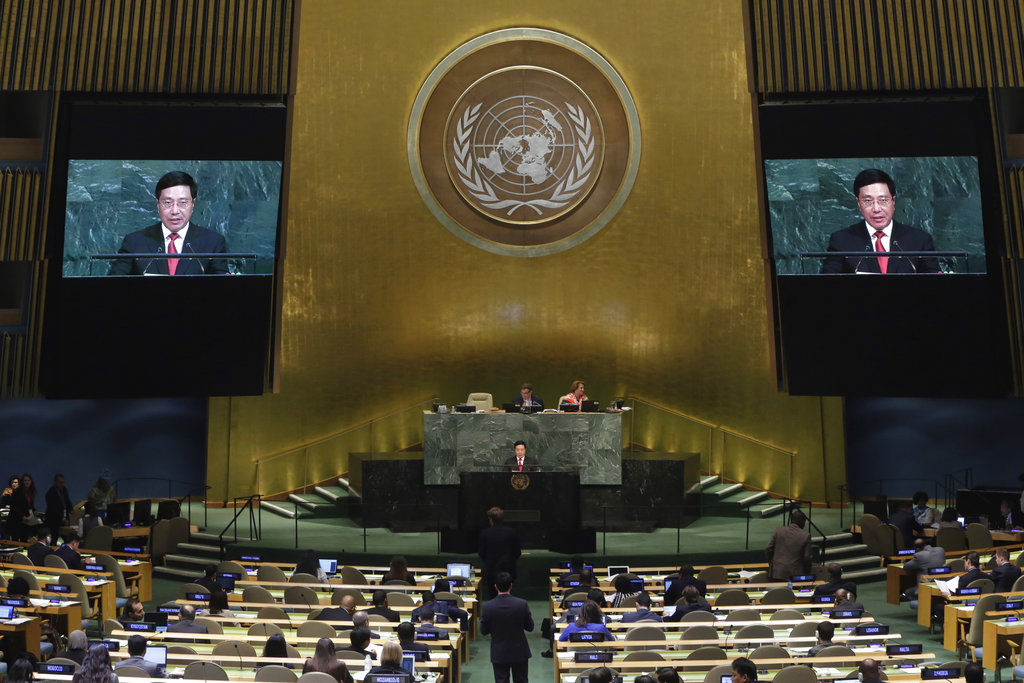 President Donald Trump is playing a dangerous game with North Korea, risking a repeat of one of the mistakes that ensnared America in the Vietnam War – only worse.

The U.S. president is castigating the leader of North Korea, Kim Jong Un, in unusually personal and menacing terms. In early August, he threatened to unleash “fire and fury” on North Korea and then warned that the U.S. armed forces were “locked and loaded.”

At the United Nations General Assembly on Sept. 19, he said that if the U.S. “is forced to defend itself or its allies, we will have no choice but to totally destroy North Korea. Rocket Man is on a suicide mission for himself and for his regime.”

The Los Angeles Times has reported that national security aides tried to get Trump to take out the taunting reference to Kim as “Rocket Man,” but he keeps repeating it. It’s the new “Crooked Hillary” or “Lyin’ Ted.”

Trump reveled in the reaction the phrase, now “Little Rocket Man,” elicited Friday from the crowd at his Alabama rally, and on Sunday he tweeted, “Just heard Foreign Minister of North Korea speak at U.N. If he echoes thoughts of Little Rocket Man, they won’t be around much longer!”

This is a long way from the standard diplo-speak of previous U.S. presidents who warned that the U.S. would respond strongly to North Korean aggression. At the same time as the president is goading the North Korean dictator, the U.S. military is flexing its muscles. On Saturday, U.S. B-1 bombers and F-15 fighters flew farther north of the Demilitarized Zone along the North Korean coastline than they have in years.

Trump clearly has Kim’s attention. The megalomaniacal North Korean strongman responded with an unusually personal riposte of his own, calling Trump a “mentally deranged U.S. dotard” and vowing to “tame” him “with fire.” His foreign minister has likened Trump’s statements to a declaration of war.

North Korea has already shown that it will not be cowed – since the “fire and fury” threat in early August, it has tested three ballistic missiles and carried out its biggest nuclear test yet. North Korea is now threatening to test a nuclear device in the Pacific Ocean and to attack the United States, although its actual response may be something very different.

It is inconceivable that any previous president would have gotten into such a war of words with a dictator. John F. Kennedy said, “Ich bin ein Berliner”; he did not call Nikita Khrushchev a “short, fat peasant.” Ronald Reagan said, “Mr. Gorbachev, tear down this wall”; he did not label Mikhail Gorbachev “Red Spot.” Those presidents knew that any confrontation with a nuclear-armed state had to be handled with the greatest delicacy, lest a miscalculation lead to Armageddon.

Trump shows no such awareness. Given that he does not read books, he would be well advised to tune into the Ken Burns and Lynn Novick PBS series on the Vietnam War to see what can happen when the U.S. acts too aggressively and thereby stumbles into a ruinous war.

In 1964, President Lyndon B. Johnson committed himself to defending South Vietnam from North Vietnamese aggression. At the same time, he authorized a covert campaign known as OPLAN 34A to send South Vietnamese commandos on raids into the North supported by the U.S. military. Johnson had no idea that in so doing he would be goading North Vietnam into a war with the United States. But that is just what happened.

One of Johnson’s covert attacks took place at midnight of July 30, 1964, with South Vietnamese naval commandos raiding two North Vietnamese islands in the Gulf of Tonkin while the destroyer USS Maddox was steaming 120 miles away. There was no direct connection between the commando raid and the Maddox’s intelligence-gathering patrol, but the North Vietnamese did not know that. On Aug. 2, three North Vietnamese torpedo boats attacked the Maddox without doing any damage.

Then on Aug. 4, another North Vietnamese attack was reported on the Maddox and its sister destroyer, the Turner Joy. The two destroyers fired 372 shells and at least four depth charges while reporting that they had dodged multiple torpedoes and enemy gunfire. Yet American pilots overhead could not see any enemy ships.

It later became obvious that the second attack had not really happened. But by then Congress had passed the Gulf of Tonkin Resolution, giving Johnson a blank check to wage war against North Vietnam. The eventual result: nearly half a million U.S. troops in South Vietnam, with 58,000 of them coming home in body bags.

Trump’s current provocations could elicit an even more catastrophic outcome. Imagine that Kim Jong Un, an inexperienced observer of American politics, takes Trump’s words seriously and then sees U.S. warplanes heading for his borders. It is not far-fetched to posit that he might give the orders to shoot down one of those aircraft.

Indeed, North Korea’s foreign minister, Ri Yong Ho, said Monday: “Since the United States declared war on our country, we will have every right to make countermeasures, including the right to shoot down United States strategic bombers even when they are not inside the airspace border of our country.”

Or imagine that North Korea responds by firing a missile in the general direction of Guam and it lands by mistake in U.S. territorial waters or even hits the island itself.

In either case, Trump would undoubtedly feel compelled to respond militarily, even if no U.S. lives or property were lost. Even a single, symbolic U.S. airstrike could further feed Kim’s paranoia, convincing him that America is about to destroy his country just as Trump has threatened. Backed into a corner, the North Korean strongman may decide he has nothing to lose by unleashing his nuclear arsenal on South Korea, Japan – even the United States.

This nightmarish scenario is becoming all too plausible because of Trump’s over-the-top bellicosity. He should turn down the rhetorical temperature. A policy of containment and deterrence worked against the Soviet Union, a country with a far larger nuclear arsenal than North Korea will ever have. Eventually the USSR peacefully imploded. The same approach can work with North Korea too, as long as we don’t stumble into an unnecessary and calamitous conflict first because of our president’s macho posturing.