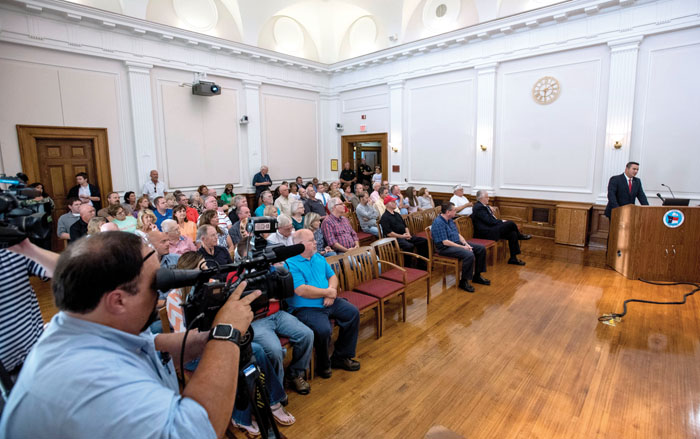 About 65 people were in attendance. By a 5-0 count, Rowan County commissioners voted Monday to appeal the latest ruling in their prayer lawsuit to the U.S. Supreme Court.Jon C. Lakey/Salisbury Post

SALISBURY — Although the Rowan County commissioners were not divided in their vote Monday night to appeal the latest ruling in a prayer lawsuit against them, people who spoke during the public-comment period before the vote were of different minds.

But six of the 20 asked the commissioners not to appeal the ruling and to accept the verdict.

“We all understand that this is a predominantly Christian county,” said Whitney Peckman. “However, we are a rapidly changing community, and many more ethnicities and religions are now represented.”

She said elected officials have a “mandate … to serve all of the community” and that, by saying Christian prayers, the commissioners make non-Christians feel like “others.”

“When you illuminate a small group as ‘the other,’ you intentionally — or not — intimidate them,” Peckman said.

The other five people who asked the commissioners not to appeal echoed similar sentiments, saying that Christian prayers before a public meeting exclude some of the commissioners’ constituents.

“We might as well just put up a banner that says, ‘We don’t want you here. Rowan County, home of Dan Nicholas Park. Foreigners, please go home,’” said Bob Johnsen.

The other 14 people who spoke said that allowing the commissioners to worship their God is part of their First Amendment rights.

“I truly don’t understand it. A lot of people preach tolerance, but then they don’t practice tolerance,” said state Rep. Carl Ford, R-China Grove. “They want me to have tolerance of them and their religion but they don’t have any for mine.”

Dean Hunter said, “The name of Jesus has always been divisive and always will be divisive.”

“I personally believe that each one of you have been afforded the opportunity to stand up for and to fight for a cause that’s greater than yourselves,” Hunter said. “A cause that represents the religious liberties of every citizen of not just our county but our great country.”

Many of the 14 who spoke in favor of appealing the decision thanked the commissioners for pursuing the issue in court to the extent that they already have.

When the commissioners made their remarks just before the vote, Chairman Greg Edds said he wanted to make clear that the issue is not about specifically praying in the name of Jesus Christ.

“If you are here because you want us to pray in Jesus’ name, I think you misunderstood the case,” Edds said.

He said that, instead, the case is about the fact that they had done nothing unconstitutional, such as coercing residents into praying.

He said that if the county did not pursue the case further, it would have to pay the legal fees for the North Carolina ACLU, which is representing the plaintiffs in the lawsuit. It was an idea that he said made him “sick to his stomach.”

He said the county would also have to pay the ACLU’s legal fees if the Supreme Court decides to hear the case and rules in the plaintiffs’ favor.

Commissioner Judy Klusman said that when she first looked at the case, it seemed like a simple issue. As an ordained pastor, she said, praying to God has always been a part of her life.

“But I think after all of us, listening to what the chairman has said and looking at the history of this, that, for me, free speech is at the very foundation of what this case is all about,” Klusman said.

Chris Brook, the ACLU of North Carolina legal director, issued a statement after the vote:
“The bottom line is that local government meetings should be welcoming to all community members, regardless of their religious beliefs. The issues in this case have already been thoroughly reviewed by two federal courts, which agreed that Rowan County’s former practice was unconstitutional.
“We believe those rulings should be the final word in this case, but no matter what, we will continue defending the rights of our clients and all Rowan County residents to be free from religious coercion by government officials.”

The ACLU filed the lawsuit in 2013 on behalf of Rowan County residents Nan Lund, Robert Voelker and Liesa Montag-Siegal.

Since then, the case has moved through several other courts and has resulted in conflicting rulings on whether or not the commissioners were within the Constitution.

The most recent ruling was in July, when a 4th Circuit en banc panel ruled 10-5 that the commissioners’ prayer practices were unconstitutional.

Now that the commissioners have voted to appeal that July ruling, the case will move to the Supreme Court. It may choose not to hear the case, which would mean that the July ruling would stand.

Before adjourning Monday’s meeting, Edds asked that “regardless of the side you’re on,” people talk with one another before leaving.

“Talk with someone tonight that came up here and didn’t say the things that you agree with. It seems like we talk at each other a lot instead of talking with each other,” Edds said. “And this is something that I believe can be used, genuinely, to unite this community.”