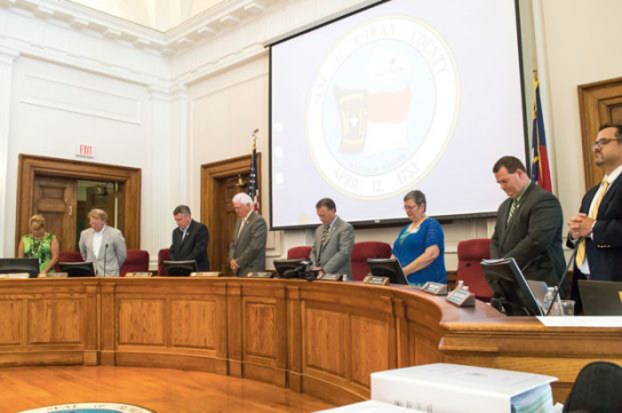 Rowan County commissioners and county staff stand for a prayer before the start of a meeting. Josh Bergeron/Salisbury Post File Photo

Letter: Bravo, commissioners, for not caving on prayer

The five Rowan County commissioners are to be commended for their unanimous vote to appeal the “prayer case” to the U. S. Supreme Court.

Too many politicians are intimidated by the ultra-liberal American Civil Liberties Union (ACLU), but not the local county commissioners and they deserve our praise for their beliefs and for not caving in to the loud few and to the national news media.

I would suggest that those few liberals in Rowan County who oppose prayer to open governmental meetings do what I suggested many years ago when a person asked me to stop opening the meetings of the State Board of Education with prayer when I had the honor of serving as chairman. I respectfully suggested that she stand in the hall until after the opening prayer because as long as I chaired the State Board of Education, every meeting would be opened with prayer even if I got sent to prison.

No one requires the anti-prayer people to be in the meeting room during the opening prayer. However, it may do them some good if they listened to the content of the prayer.

As a native of Rowan County, I am very proud of the county commissioners and the overwhelming majority of citizens who support prayer to open all meetings. Heaven knows, our public officials need prayer as they face so many difficult challenges. I would suggest that they also invite persons of different faiths to join them in leading the prayers.

Other voices: Turn campus crimes over to police

For much of this decade, Americans have debated how college administrators should handle allegations of campus sexual assaults. How to... read more