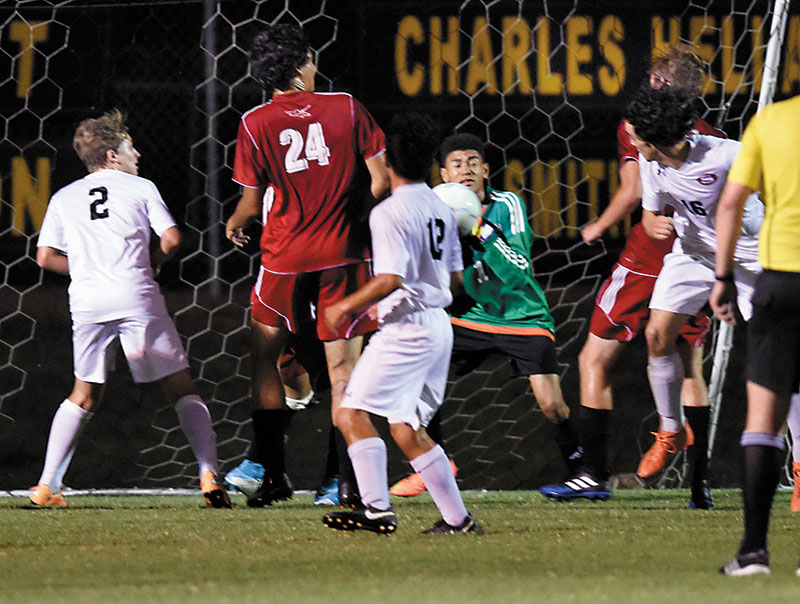 SALISBURY — A lot has changed since the Salisbury boys soccer team was staring down the barrel of an 0-4 conference start.

Three weeks ago, the Hornets were were shorthanded by injuries and underachieving at both ends of the field — and looked nothing like a team that had reached the second round of last year’s 2A state playoffs.

“It hasn’t been easy,” center back Jack Fisher said. “At the beginning of the season, we thought we were entitled to something just by walking out on the field. Now we realize we aren’t and need to put in a lot more effort. It’s just starting to pay off.”

It did Monday night at Ludwig Stadium, where Salisbury throttled visiting South Rowan 3-0 for its fifth straight CCC victory. The Hornets (6-5-1, 5-4) haven’t lost since Sept. 7 and all signs point to a robust second-half of the season.

“There were times when we thought the name on the front of the jersey was more important than the effort we put forth,” said SHS coach Matt Parrish. “Just because we won the league x-amount of times, people weren’t going to bow down to us. We were overconfident and playing a little beyond our means.”

Chalk it off as a lesson learned. Against South (3-9-1, 3-6 CCC), the Hornets re-calibrated their expectations and announced their intentions to contend for another post-season berth.

While Salisbury is riding a newfound wave of togetherness, the youthful Raiders are headed in the opposite direction. They’ve lost three straight matches and four of their last five.

“It’s always disappointing to lose,” South coach Kyle Neal said. “More disappointing is how we lost. The things we’ve been good at, they beat us at. We’ve been scoring on long throw-ins and set pieces and bullying people around. Tonight we got bullied around.”

It started before the match was nine-minutes old when Fisher launched a cloud-scraping throw-in from the left side toward the South net. The ball rattled around the doorstep, brushed against Angel Quintero’s knee and slid to junior sniper Tony Figueroa — who drove a hard shot past South keeper Parker Anderson.

“Right place at the right time,” Figueroa said. “It hit somewhere in there and bounced around between Angel and the defender. I just finished it off.”

It was still a one-goal game when South opened the second half with renewed vigor. The Raiders peppered Salisbury’s defense with no-look passes and shots wide-of-the-mark — but never did solve winning keeper Josh Faulkner.

“They came out in the second half on fire,” Parrish said. “They rammed it right down our throats for a solid 10 minutes. I thought they were waning a little at the end of the first half, but I was wrong. We were lucky to weather that storm.”

The Hornets settled the matter in abrupt fashion, netting two goals in less than four minutes. Figueroa made it 2-0 when he scored on a deflection at the 12:54 mark. And Holland sealed the deal when caught up with another strong-armed throw-in by Fisher and pushed a shot past Anderson at 16:41.

“Usually on throws I stand back further than everyone else,” Holland said after scoring his fourth goal of the season. “Then I just run to where I think it might hit. That makes two games in row where that play worked.”

Fisher, who subbed as a goal-keeper while Faulkner nursed an early-season injury, did not score but his fingerprints were all over this triumph.

“I didn’t know he could throw it all the way across the field like that,” Neal said. “He was impressive.”

South’s best scoring chance came with two minutes to play when German Delgado — the team-leader with eight goals — drilled a sizzling, 35-yard shot from the left side that an outstretched Faulkner deflected over the crossbar and out of bounds. It was Delgado’s first appearance in a week-and-a-half since suffering a leg injury following a South football game.

The Hornets, meanwhile, appear to have righted a rudderless ship.

“I think we finally understand each other and what we have do,” said Figueroa. “We have to play balls on the ground and make more chances.”

NOTES: Figueroa now has eight goals. … Salisbury outshot the Raiders, 14-3. The shutout was their fourth of the year. … Both teams try to avenge late-August conference losses on Wednesday: Salisbury at Thomasville and South at home against East Davidson.