In search of pumpkin spice enlightenment 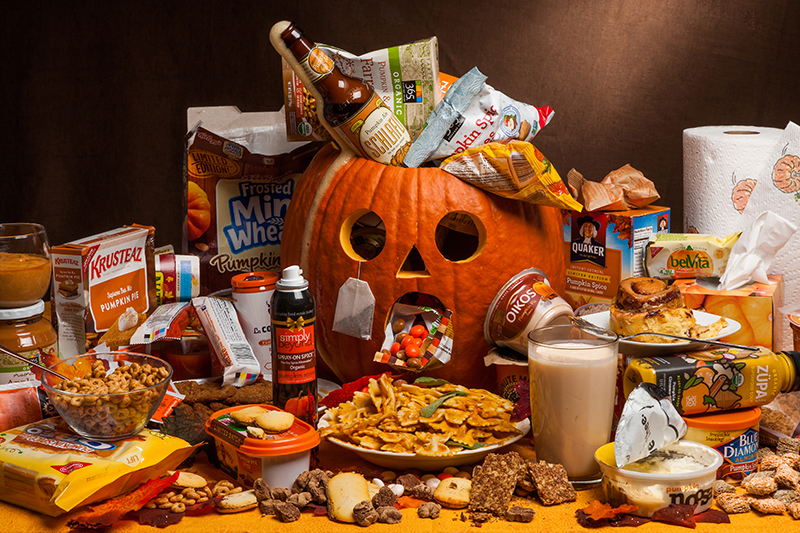 I used every pumpkin spice product I could find for a week. Now my armpits smell like nutmeg.
By Maura Judkis
The Washington Post

Pumpkin spice is not a flavor, it’s a lifestyle. Its mantra is the crackle of fallen leaves and bonfires. “Sweater weather” is its holy creed. The pumpkin spice life, like its coffee, is sweet, and you are always #thankful for your #blessings. It was never really about that particular blend of cinnamon, clove, nutmeg, ginger and allspice, but how it makes us feel: warm, nostalgic, loved.

Corporations would like us to experience these feelings when we think of their products, and that’s how we got to the place we are today: Where the debut of the Starbucks pumpkin spice latte is more eagerly anticipated than any blockbuster film. And where a person can go to the grocery store and pick up dozens of pumpkin spice products, from kefir to dog treats. Which is exactly what I did, for one nutmeg-laden week: Any time I encountered a pumpkin-themed product, I bought it. My cart overflowed with orange packaging for cereal, candy, cookies, tea, coffee, gluten-free frozen waffles, pasta sauce, cheese, paper towels and scented candles. I looked completely deranged.

I ended up with more than 40 products. I’m writing this story after a breakfast of pumpkin spice toast, pumpkin spice yogurt with pumpkin granola, and an iced pumpkin spice chai, sitting next to a flickering pumpkin spice candle, because I am seeking pumpkin spice enlightenment. Like going on a silent meditation retreat, I have immersed myself in the pumpkin spice lifestyle, and it is equal parts embarrassing and exhilarating, but that’s probably just the seven-day sugar binge talking.

Are you A Basic?

To write about pumpkin spice is to write about a particular species of American: The Basic. Short for “Basic B—-,” she revels in conventional pursuits like Nicholas Sparks novels, wearing leggings and brunch. The term originated in hip-hop and was co-opted by white women, and somewhere in that process, pumpkin spice became the ultimate symbol of basicness – sweet, bland, unoriginal. To call someone basic is classist, because typically, it’s the wealthy who can afford to cultivate less conventional tastes. But the insult has been reclaimed by its victims: There are essays about how women are “proud to be basic,” and, in turn, proud to love pumpkin spice.

Before embarking on my pumpkin spice binge, I decided to assess the situation by taking a BuzzFeed “How basic are you?” quiz. Yes, I checked off, I love bagels, but no, I don’t like them “scooped.” I take barre classes, but I don’t say “margs” instead of “margaritas” (shudder). The verdict came back: a score of 16 out of 119, “not basic at all.” I had a lot of work to do.

It started with a trip to my local Giant on Labor Day, the day before the PSL, as it’s called, hit Starbucks for the season. It was 85 degrees and sunny outside, but I was stocking up on autumn: pumpkin spice Chobani yogurt, Pillsbury pumpkin spice cinnamon rolls, Land O’ Lakes pumpkin spice “butter spread,” Belvita pumpkin spice breakfast biscuits. That night, I watched as Starbucks completed an 80-hour Facebook broadcast with the “hatching” of the season’s first PSL, named “Fall’icia.” Fans were commenting furiously.

“The pumpkin is pregnant, Melissa,” one said, explaining the strange tableau: a pumpkin sitting in a bird’s nest, with a fog machine just off screen.

“Hope it’s fog and not smoke . . . not good for the baby,” posted another woman.

“Can she give birth already? I have to watch Bachelor in Paradise,” a third posted.

And then the blessed virgin pumpkin gave birth to Fall’icia, and wrapped her in a heat-resistant cardboard sleeve and placed her in a manger, for there was no room at the Starbucks. And an angel of the Basics appeared to them and said: “Glory to Fall in the highest heaven, and on earth peace to those who wear North Face jackets and love Taylor Swift.”

It started with pie

It was originally called pumpkin pie spice, first packaged and sold as a blend in the 1950s. It didn’t make its way into the Starbucks drink until 2003 – and, in subsequent years, into pretty much everything else. The PSL has consistently been the chain’s most popular seasonal drink. One of its first test markets was Washington.

But our area’s history with the flavor goes back much further. Previously unbeknown to even my editor, one of the first references to “pumpkin spice” appears to be a 1936 recipe that ran in The Washington Post. (The call is coming from inside the house!)

“Pumpkin spice cake is a desirable dessert for a family dinner, and a healthful pick-me-up for children after school,” read a recipe that was eyebrow-raisingly outdated, referring to pumpkin as a food of the “Italian peasantry.” We could find no earlier reference to “pumpkin spice” in a search of historical newspapers.

It is possible to spend an entire day subsisting off nothing but pumpkin-spice products. For breakfast, you might have one of the yogurts – a Chobani flip, with a little pocket of pumpkin seeds to stir in, or the Noosa, with a smear of pumpkin puree the color of sunset. You could have pumpkin spice Cheerios, or Frosted Mini-Wheats, or granola from Archer Farms, the house brand of Target. If you don’t eat gluten, no worries: Nature’s Path has gluten-free pumpkin spice waffles. You can mix your chilled Tazo pumpkin spice tea with milk for an iced latte, or pop open a can of La Colombe pumpkin spice draft latte. For a midmorning snack, there’s pumpkin spice Blue Diamond nuts, or maybe G.H. Cretors pumpkin spice popcorn.

Lunch brings you to Au Bon Pain’s new seasonal sandwich: a pumpkin-butter-smeared croissant with hot ham, turkey and cheese. For dinner, start with a Zupa Noma Pumpkin Cinnamon Sage bottled soup, then pasta with Giant-brand pumpkin pasta sauce, which is not expressly branded as pumpkin spice, but tastes sweet enough that it should be. Dessert brings a bounty of options: Halo Top pumpkin pie ice cream? Halloween-orange pumpkin spice Oreos? Or Whole Foods’ 365-brand pumpkin spice bites – miniature cookies that taste more of apple than pumpkin spice, but why quibble?

No matter how orange, it will rarely taste of pumpkin, because pumpkin is not the point. Sure, there’s pumpkin puree – or more frequently, “pumpkin powder” – in many products. But it’s mostly for decoration, and frequently overpowered by cinnamon or clove. The Jell-O Pumpkin Pie Pudding tastes mostly of vanilla and nutmeg. The pumpkin spice Cheerios aren’t too different from classic honey nut. The pumpkin spice Belvita biscuits taste like a graham cracker mixed with a communion wafer. (We are probably only a year away from pumpkin spice communion wafers.) The M&Ms taste mostly of corn syrup.

The pumpkin spice lifestyle is not just about the flavor, but about making sure that everyone knows you are a disciple. There are shirts that say “Pumpkin spice is my favorite season,” or “I like pumpkin spice a latte,” or the simple “Leggings, boots & pumpkin spice.” If you spill your coffee, you can wipe it up with pumpkin-print paper towels. Blow your nose with tissue in a pumpkin-festooned box. Make your sweat smell like nutmeg with Native’s pumpkin spice deodorant. (“You smell like . . . vanilla?” my husband guessed, but maybe he was smelling my Glade “Cozy Autumn” candle.)

You don’t even have to be human to live the PS lifestyle. Spoil Me Rotten’s “pumpkin n’spice” dog biscuits ensure that a Basic’s best friends will get seasonal treats too. My dogs loved them! They also love eating garbage straight out of the can. They also love licking their own butts.

If you think dog biscuits are peak pumpkin spice, you may be right. This year could be the beginning of the end of the pumpkin spice party. Two consumer research firms, Nielsen and 1010data, have found that interest in pumpkin spice-flavored products is not growing as quickly in 2017 as in previous years. According to Nielsen, dollar sales of pumpkin-flavored items reached a new high in 2017 at $414 million. But growth over the previous year has been much slower – 6 percent, compared with 20 percent in 2013. Most pumpkin spice latte drinkers buy only one per season.

Companies haven’t gotten the memo yet. According to 1010data, the number of pumpkin spice products for sale online had surged nearly 50 percent over last year, while sales themselves are up just 21 percent.

“It’s just not quite as popular as it was a few years ago,” said Samir Bhavnani, vice president of consumer insights for 1010data. “It might put some negative connotations in consumer’s minds. They’re probably just over it. It’s too much . . . do you really need pumpkin spice in your yogurt?”

The yogurts are kind of good, actually. I bought more of them after a barre class, clad in head-to-toe Athleisure, and I was hyper-aware of how much of a stereotype I appeared to be. The La Colombe canned coffees, too – those I’d drink again. I was prepared to be horrified by the pumpkin spice goat cheese, from Giant’s house brand, but it tasted like cheesecake.

But just when I thought I could get accustomed to the pumpkin spice lifestyle, one product snapped me out of it.

Organic spray-on pumpkin spice. It’s in an compressed air can and you can drench any inadequately pumpkin-spiced item with the flavor. You could have pumpkin spice tuna! Pumpkin spice wine. Pumpkin spice cough syrup. It tastes like you squirted an air freshener directly into your mouth. On the back, there’s a warning label in red: “Avoid spraying in eyes.”

I think I’m going to keep a bottle of it in my purse forever. Not so I can make everything pumpkin spice – the world already has enough of that. Instead, if I ever get mugged, I’m going to use it as mace.

This is a tweaked version of the recipe that ran in The Washington Post in 1936 – perhaps the first in print to join the words “pumpkin” and “spice” in modern harmony. The original called for shortening, a full teaspoon of ground mace, raisins and for the cake to start in a cold oven; the result was a somewhat dense loaf with an overwhelming taste of that spice.

Here, we’ve used unsalted butter, reduced the mace to ¼ teaspoon, chopped crystallized ginger and placed the cake in a preheated oven; the result was moister and taller.

The cake can be wrapped and stored at room temperature for up to 5 days. The cooled cake, wrapped well in plastic wrap, can be frozen for up to 3 months.

Sift together the flour, baking powder, salt, cinnamon, mace and cloves on a sheet of parchment or wax paper. Combine the pumpkin and milk in a large liquid measuring cup, stirring to incorporate.

On medium-low speed, alternately add half flour mixture and then half the pumpkin mixture, beating until incorporated. Repeat with the remaining flour and pumpkin mixtures to form a thick batter. (This mixing can be done by hand as well.) Stir in the chopped crystallized ginger so it’s evenly distributed.

Transfer the batter to loaf pan, smoothing it evenly. Bake (middle rack) for 55 minutes, or until a tester inserted into the center of the cake comes out clean. The cake will be lightly browned at the edges and may develop a crack on top.

Transfer (in the pan) to a wire rack to cool for 10 minutes, then dislodge and cool the loaf directly on the rack for at least 20 minutes before serving. Cool completely before storing.

In it for the long haul: Ray Cope fondly…