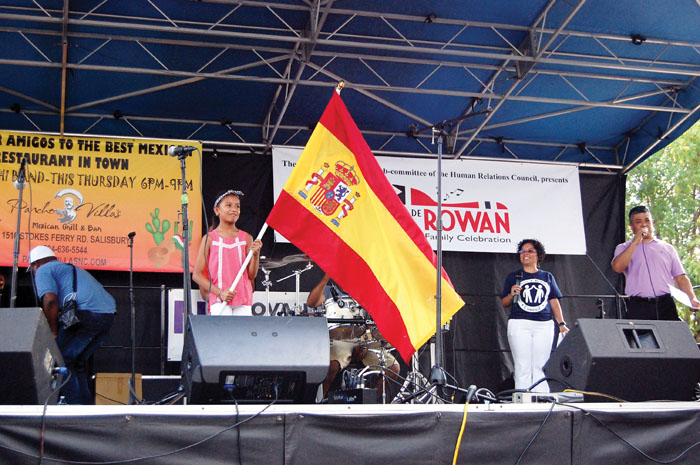 La Fiesta event chair Flora Calderon-Steck smiles at the girl waving Spain's flag during the Parade of Flags. In addition to the Parade of Flags, the event also featured local Hispanic bands and performers. Photo by Jessica Coates, Salisbury Post.

She said that, in most cases, the children who held the flags were from the country that was represented.

Argentina, Spain and Brazil were just a few of the countries represented.

“And we always honor the American flag first,” Spears said, “because we have such a privilege of being here.”

The Parade of Flags was just one of the many events that made up the 16th annual La Fiesta de Rowan.

“What I’m particularly excited about for this year is that it’s mostly grassroots performers,” said La Fiesta event chair Flora Calderon-Steck. “And we’re giving them a stage to be able to share their culture with the Rowan County population.”

“One, we want to expose the Spanish community (and) show that they are involved strongly in our city and in our community,” Rivers said. “We want to make sure that they have a voice and know that others also understand that we are part of this community together.”

“Instead of them going out to try to find it all … this event is like one big resource base, more than anything,” Rivers said. “And it’s an opportunity to get a foot in the door to kind of get an idea, because some people might walk into (the Department of Social Services) or walk into Rowan Health (Department).”

He said that many of the vendors at the event were of Hispanic descent or Spanish speakers.

“So that way, when they see someone from their own culture, they’ll be more inclined to be comfortable talking to them. Especially when it comes to insurance or medical issues and different things like that,” Rivers said.

Rivers said that the event was also helpful for Rowan County residents who are not Hispanic, in terms of both learning about Hispanic culture and about available resources.

“It’s definitely educational. La Fiesta is for people of Spanish descent, but also it’s open to the community at large. So it’s not like it’s closed off to anyone,” Rivers said. “So even a Caucasian or an African-American or a Native American, anybody can come and still get the exact same resources.”

In addition to the performances and vendors, Spears said that elected officials and candidates running for office were also invited.
“A lot of the Hispanic population is getting to the age of voting, so it’s very important to teach them and get them to meet the candidates that are running for public office in our local election,” Spears said. “And one of the initiatives that I really want to (mention) — and it’s deep in my heart — is that our children vote at these elections. Because, by voting, we have a voice.”

Spears said, more than anything, the event was meant to celebrate “togetherness” among different Rowan County demographics.

“It’s an event where we not only want to celebrate the Hispanic culture, but we want to celebrate us living together here in Rowan County, that togetherness,” Spears said. “Our kids go to school together with African-Americans, with Indians, (people) from all countries. So that’s what we’re celebrating today.”

La Fiesta de Rowan is the largest event organized by the Hispanic Coalition, which is a sub-committee of the Human Relations Council.