MoonPie celebrates 100 years with the “Thank You America” tour 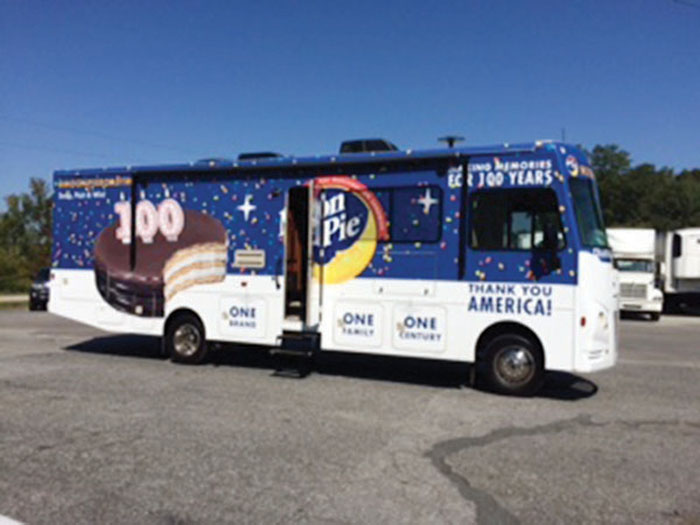 CHATTANOOGA, TN. — In 1917, the MoonPie marshmallow sandwich was introduced to America.

Now, 100 years later, Chattanooga Bakery, Inc., maker of the MoonPie, is celebrating the brand’s 100th anniversary with a “Thank You America” tour to return the favor, thanking customers and consumers for their loyalty and sampling factory-fresh “Original Recipe” MoonPies.
Chattanooga Bakery and Winnebago have created the “MoonPie Memory Mobile,” a Winnebago
Vista 31BE, that features MoonPie graphics and references to the Centennial celebration.
Beginning Sept. 17, the “can’t miss” RV began touring the country for four months,
making “thank you” stops at customer offices, media outlets, festivals, sporting events and other
special locations.
In celebration of its 100th and in recognition of the “clean label/real ingredients” consumer trend, MoonPie will be sampling the “Original Recipe” MoonPie, shipping nationwide starting in September.
“We’re super excited about our return to the ‘Original Recipe’ MoonPie,” said Tory Johnston, vice president of sales and marketing at Chattanooga Bakery. “Consumers love the taste and appreciate the clean ingredients … What better way to celebrate than to bring this new product directly to our loyal customers and fans and tell them thank you in person.”
The “Thank You America” tour launched from MoonPie headquarters in Chattanooga, Tenn.,
and proceeded first to North Carolina and Virginia as part of a “Southern swing,” before it expands to other markets.

The “captains” of the MoonPie Mobile will be the company’s top executives who will personally be driving the Winnebago vehicle around the country.

“You’ll find us driving the speed limit in the right lane, I assure you,” laughed Johnston. “We won’t be hard to spot, and we’ll have samples ready to share … Give us a honk.”

“The ‘Thank You America’ tour brings together two iconic American brands, MoonPie and Winnebago, that have been part of Americana for decades,” said Chad Reece, director of
marketing for Winnebago. “While the MoonPie brand is celebrating 100 years with this tour, at
Winnebago we are gearing up for our 60th anniversary in 2018.”
In addition to the creation of the customized MoonPie Mobile, MoonPie and Winnebago will also be cross-promoting each other throughout the “Thank You America” tour.

MoonPie and Winnebago will both be featuring regular social media updates on the whereabouts of the MoonPie Mobile.

Over the past 100 years, MoonPies have been a cultural phenomenon and saluted in songs, books, movies, and even with a yearly festival: The RC and MoonPie Festival in Bell Buckle, Tenn.
“When you mention the name ‘MoonPie,’ it typically brings a smile first, followed quickly by a
memory,” said Johnston. “It’s a whimsical, fun brand.”
Earl Mitchell, a traveling salesman for Chattanooga Bakery servicing Kentucky, Tenn., and
West Virginia during the early 1900s, helped invent the MoonPie. While visiting a general store
that catered to coal miners, he asked what they might enjoy as a snack. The miners said they
wanted something delicious and big for their lunch pails. When Mr. Mitchell asked how big, it was around that time the moon was rising. One coal miner held out his big hands and framed the moon and said, “About that big.”
You can visit www.moonpie.com or www.winnebagoind.com to get information of the MoonPie
“Thank You America” tour that will run from September to December.

In it for the long haul: Ray Cope fondly…