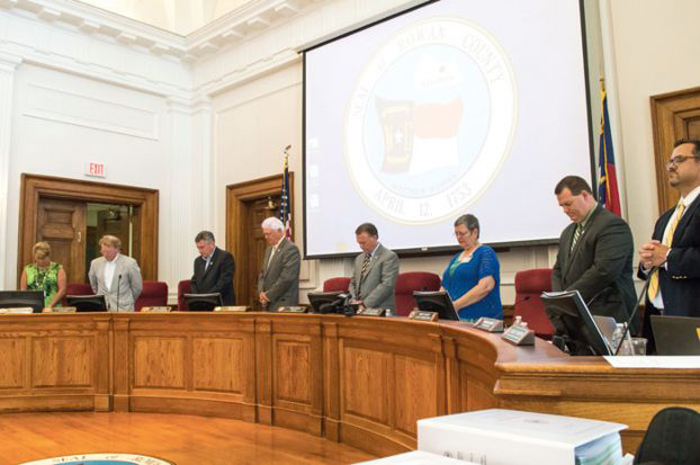 Rowan County commissioners and county staff stand for a prayer before the start of a meeting. Josh Bergeron/Salisbury Post File Photo

SALISBURY — The Rowan County commissioners on Monday are expected to decide to appeal the latest ruling in the prayer lawsuit against them to the U.S. Supreme Court.

The suit, known as Lund v. Rowan County, focuses on whether the commissioners can say sectarian prayers before the start of their meetings. In July, the 4th Circuit Court of Appeals ruled 10-5 that the commissioners’ prayer practices violated the Constitution by identifying its government with Christianity, possibly conveying a message of exclusion and going too far in offering sectarian prayers.

In a called meeting at 6 p.m. Monday, the commissioners will vote on whether to appeal the ruling to the U.S. Supreme Court, which could decline to hear the case. The meeting will also include a public-comment period at which speakers will be limited to three minutes each.

Two county commissioners — Craig Pierce and Mike Caskey — were the first to announce their support for an appeal. The remaining three commissioners have not said how they will vote. However, David Gibbs, an attorney representing Rowan County, said it “appears likely” the commissioners will appeal the 4th Circuit Court’s decision.

Gibbs is president of the National Center of Life and Liberty, a Florida-based nonprofit group that has brought in a number of attorneys to help with the case. The center has represented Rowan County from the start of the suit. Meanwhile, the North Carolina ACLU represents three local residents — Nan Lund, Robert Voelker and Liesa Montag-Siegel — who filed the prayer lawsuit.

With Pierce and Caskey in favor of an appeal, all that’s needed is one of the remaining three commissioners to support taking the case to the Supreme Court. When the commissioners last voted to proceed with their case, appealing a District Court ruling, the vote was unanimous among the five Republicans on the board.

If an appeal is approved Monday, the Supreme Court will then decide how to act on Rowan County’s decision.

A court ruling in Michigan will be one factor affecting the commissioners’ decision. Earlier this month, the 6th Circuit Court of Appeals ruled that prayer practices by commissioners in Jackson County, Michigan, do not violate the Constitution. The case is similar, though not identical, to the Rowan County suit. Still, the 6th Circuit’s decision created a “circuit split” — in which one court rules differently than another. It’s a factor that increases the likelihood of the U.S. Supreme Court accepting the case and clearing up apparent contradictions in rulings between the two circuits.

If Rowan County decides not to appeal the case, the commissioners could be on the hook for about $300,000 in attorney fees from the ACLU, Gibbs said. The county has not been charged by the National Center of Life and Liberty for representation in the prayer lawsuit, which dates back to 2013.

In federal District Court, Judge James A. Beaty ruled that the commissioners’ violated the Constitution by offering prayers that were exclusively Christian.

“While an all-comers policy is not necessarily required, a nondiscriminatory one is,” Beaty wrote in his 2015 opinion. “When all faiths but those of the five elected commissioners are excluded, the policy inherently discriminates and disfavors religious minorities.”

Unhappy with the decision, the commissioners appealed that ruling to the 4th Circuit Court of Appeals. In 2016, a three-judge panel for the 4th Circuit, by a 2-1 count, ruled that the prayer practices did not violate the Constitution.

Judge G. Steven Agee, writing for the majority, said the District Court’s decision was “not supportable.”

“In essence, the District Court treated the Supreme Court’s jurisprudential silence on lawmaker-led prayer as conclusively excluding legislators from being permissible prayer-givers to their own legislative bodies,” Agee wrote.

In July’s 10-5 ruling that the commissioners’ prayer practices violated the Constitution, Judge J. Harvie Wilkinson, who was in the minority in the prior 2-1 4th Circuit ruling, wrote the opinion for the en banc panel.

“Our Constitution seeks to preserve religious liberty without courting religious animosity,” Wilkinson wrote in the majority opinion. “In this quest, our two religion clauses have been a great success, helping to spare Americans the depth of religious strife that so many societies have had to suffer and endure. And yet free religious exercise can only remain free if not influenced and directed by the hand of the state. On this score, the county simply went too far.”

Now, the case is at a crossroads.

If the Supreme Court accepts the appeal, it would be its first major prayer case since a 2014 ruling in Greece vs. Galloway. In that case, the court ruled that volunteer chaplains can offer opening invocations. The Rowan County commissioners have themselves offered prayers to start their meetings.