In it for the long haul: Ray Cope fondly remembers time on the road as a truck driver 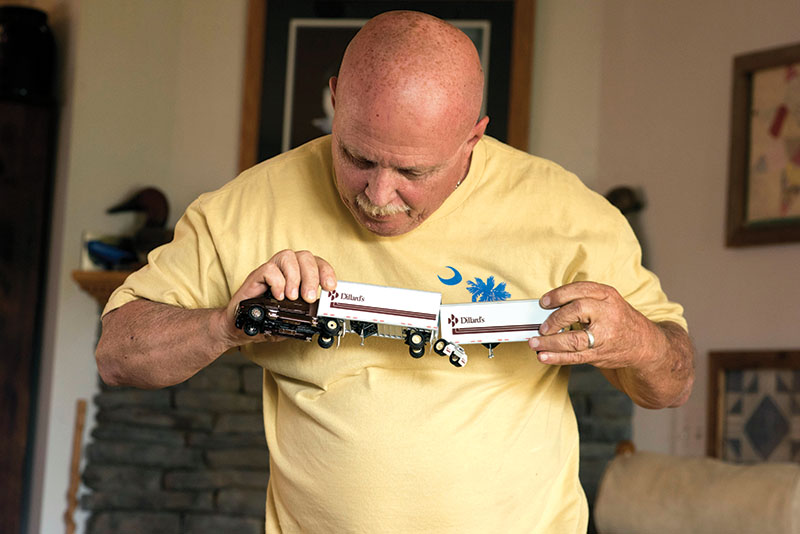 SALISBURY — Ray Cope was just a teenager when he fell in love with the road. String-bean thin, short, and with dreams of being a highway patrolman, he had no idea the influence a short trip to Kernersville would wield on his future.

It was sometime in the mid-1960s when Cope’s “Uncle Riley” took him up to Kernersville to buy a brand new Freightliner truck. Riley drove for a living, contracting out to different companies, and had decided it was high time to get his own truck. It was shining, green and beautiful. Cope said he can still remember the smell of it.

“And I rode back in that thing and thought, ‘Man, this would be some way to make a living,’” he said.

Now 66, Cope has been driving trucks for just over 50 years without a chargeable accident. The Lexington native retires at the end of September, but remembers his decades on the road fondly. He’s been from North Carolina to Oregon, and up into Canada or down into Mexico, but his career started out with a bit of disappointment.

In high school, Cope drove a school bus and worked on the loading dock of a local company, Byrd Motorline, which worked hauling furniture.

“I wasn’t no bigger than a midget and here I was trying to wrestle big armoires,” Cope said.

He hated it. One day, he begged a driver — who he only remembers as “Charlie” to back in a truck. Charlie relented.

“I was so small I couldn’t hardly see over the steering wheel,” Cope said.

But he wanted to work for the Highway Patrol. At the time, trainees had to meet height and weight requirements, and Cope quite literally fell short.

Determined not to let his dream die out, Cope did what he figured was the next best thing — a stint at the local police department.

But he was used to driving trucks at that point, and the salary that came with it. Eventually, Cope felt he had to make a choice, and the road won. For the next 50 years, he traveled — and worked — all over.

After graduating high school in 1971, Cope began working for Coble Dairy out of Lexington. He drove an old Mack truck that had no power steering.

“You could look down around the gear shift and you could actually see the road. …And that’s just the way it was,” he said.

“The difference between the first truck I drove and this truck is day and night,” he said.

But there was camaraderie between truckers, who talked to each other over CB radios and played tricks on each other at stops.

“I found it more fun than a job, really,” he said.

But it did get lonely.

Sitting in his living room off Bee Line Lane, surrounded by quilts and pictures of his family, with his wife of nine years Vera by his side, Cope remembers the hard times.

Just a few years out of high school, Cope found himself caught in the Great Blizzard of 1978. He was hauling cream from Lexington to Wisconsin, when he and other truckers hit a whiteout near Remington, Ind.

Traffic on the route came to a halt, with cars and trucks stranded as the blizzard raged.

“They always said you might see your life pass before your eyes one day,” Cope said.

For him, it was that day. He and his driving partner took shelter in another truck that still had an engine running, but fuel was fast running out. The driver crossed the frozen median, going north in the southbound lane until the group reached an exit ramp. Through the snow and the wind, Cope said he could just barely make out the lights of a Stuckey’s-style travel stop.

“’I’m not dying in a snowstorm in Indiana,’ Cope told the group in the truck. “I’m just not gonna do it.’ …I took off running.”

In his small jacket, wading through snow drifts that came up to his waist, Cope took off, headed for the light. He said he barely made it to the restaurant.

“I was hurting so bad I could hardly stand it I was so cold,” he said.

Roughly 200 people were crammed into the small diner, with a line for the phone wrapping around the inside of the building. They slept on cardboard boxes on the floor, and ate food out of the diner. Cope and his friend were stuck there for two days before the snow abated and rescue workers were able to move them to a church in Remington.

There, they bought winter coats, and sat in a bar watching a re-run of Evel Knievel jump Caesar’s Palace while they waited for the roads to clear. When they finally made it to Wisconsin, they had to break apart the cream with hammers and thaw it with hot water.

“It took us a week to get there and back,” he said, with a chuckle.

After driving for Coble, Cope moved to driving for Overnight Transportation. He was still working there when employees went on strike in the 1990s in the hopes of getting a union. By that time, Cope’s wife of several years had developed cancer.

So Cope kept driving. Overnight flew him to strike-affected terminals all over the country, and the strike raged.

“It got nasty,” he remembered.

Cope was labeled a “scab,” and frequently had rocks thrown at him and his car. Once, he was shot at. Cope said he remembers seeing the gleam of the gun out of the window, and hearing the echo of the shot. Luckily, the shot missed, just puncturing the metal side of the cab. Other drivers were not so lucky.

As his wife sickened, Cope took to driving locally as a Mayola route salesman, before she passed in 2006.

For the past 10 years, Cope’s been driving for Fort Worth Carriers, delivering goods to Dillard’s stores across the country. He’s been married to wife, Vera, for nine years. And there’s been a lot of good, as well.

His favorite sight, by far, was seeing a space shuttle take off in the 1990s. Cope managed to sweet-talk his way into a trip to Miami around the time of a shuttle launch. He stopped in a little diner in Titusville, about 10 miles from the cape, and watched the launch preparation on the restaurant’s TV.

“When they said ‘3-2-1 blast off’ I looked toward the cape ‘bout that time. And you know, I didn’t think much of it until I seen that thing climb across them trees. You talk about just plain beautiful. That was just awesome,” he said.

When he retires at the end of September, Cope wants to buy a motorhome and drive Vera around, showing her the beautiful sights he’s seen for the past five decades. He said he thinks he’d like to take her out West. There’s something about the country there, about driving out there, that makes him feel a part of something bigger.

“You think about our forefathers going through there on a wagon train. I swear, it’s so rough, and it’s so rugged, you got a tendency to think, ‘That’s a fairytale. Ain’t no way nobody made it through here in a wagon.’ It really just takes your breath away,” he said.

For the past 10 years, Cope has been rewarded for a safe driving record — one he’s kept throughout his career. In just a few weeks, he’ll cut the engine on that part of his life.

“I’ve enjoyed it,” he said of his time on the road. “I’ve really enjoyed it.”