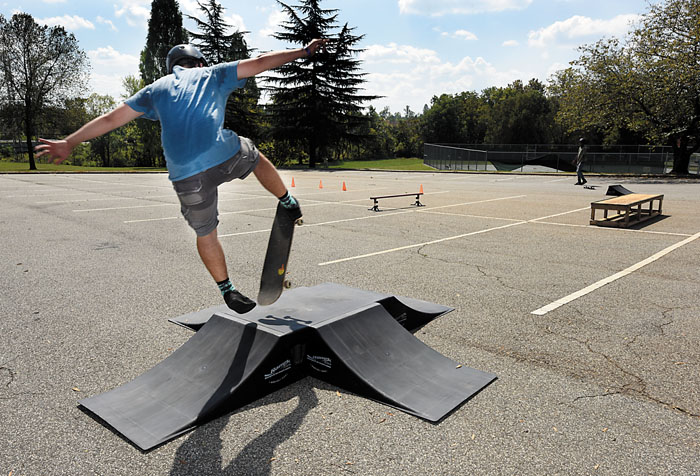 Andrew Garner goes over a ramp in the Skate Jam on Saturday at Salisbury Civic Center. Wayne Hinshaw/for the Salisbury Post

SALISBURY — Skaters like Noah Larson, 16, and Baron Wright, 15, can be found all over Salisbury — in empty parking lots, on neighborhood roads and on municipal staircases.

Although they say that there’s nowhere in town where they’re allowed to skate, that doesn’t stop them.

“It’s pretty much impossible to stop skaters … because it’s our passion, you know. It’s a lifestyle,” Larson said. “It’s like telling someone to stop breathing. I mean, you can’t do it; it just doesn’t work.”

Larson and Wright have both been skating for about two years, and they said they thought it was “pretty cool” that the city held its first ever Skate Jam at the Salisbury Civic Center on Saturday.

“I never voluntarily wear a helmet,” Larson said. “It makes you feel weird. I’m really superstitious about my skating. I need to feel completely free.”

Wright said that after you skate for a while, you “learn how to protect yourself from hitting your head,” thereby removing the need for a helmet.

That posed a problem for the Salisbury Parks and Recreation Department, said Director Nick Aceves.

“If you talk to most directors, if not all directors in parks and recreation across the state, one of their biggest issues (with skate parks) is protective equipment,” Aceves said. “That’s one thing we can’t bend on. It’s a liability issue.”

Asked if he thought that enforcing the helmet rule could isolate the group the department is trying to attract, Aceves said yes.

“From what I’ve heard, some skaters don’t like to wear them, (and) some don’t mind. Some wear it because they want to wear it, you know? But they may skate out in the general public, and that’s what they’re used to,” Aceves said. “It’s just, with us — not just the city, but with other directors I’ve talked to — that’s just their biggest barrier.”

Aceves said the department does not want the helmet issue to stop it from trying to make future Skate Jams a success.

“First, out here, we’re all just going to have a good time. You know, music. See how the turnout is at the rest of the event. And we’re just going to try it again. I mean, we’re going to keep trying,” Aceves said. “And we might look at having helmets on hand for anyone who shows up and doesn’t have a helmet … and see if that helps.”

Aceves said he’s not sure the city will ever get a permanent skate park.

He said that when he last looked into it several years ago, he heard from several parks directors in other parts of the state who had built skate parks that those parks don’t keep skaters from skating downtown.

Wilborn had worked with Myles Cannon, the young skater who convinced the city to host the inaugural Skate Jam. He said that Cannon had convinced him that there is a skating community in Salisbury.

“I think, if the demand is there, I think there’s a good possibility,” Wilborn said. “Hopefully, we can keep moving forward to maybe get there, one day, to a complete skate park.”

Cannon, 16, wore a helmet to the jam and came early to help the Parks and Recreation staff set up the skate apparatuses.

He said skateboarding is more than an athletic activity to him.

“I believe in skateboarding because I believe it’s … a way for people to connect from different reaches of life, and it’s such a loving activity in a way,” Cannon said. “I believe that it’s a way to break down barriers.”

Aceves said the city will hold another Skate Jam, but organizers will incorporate feedback from the skaters who showed up Saturday. Aceves said the next jam will probably be in the spring and will be at night.