Editorial: Salisbury a step ahead? 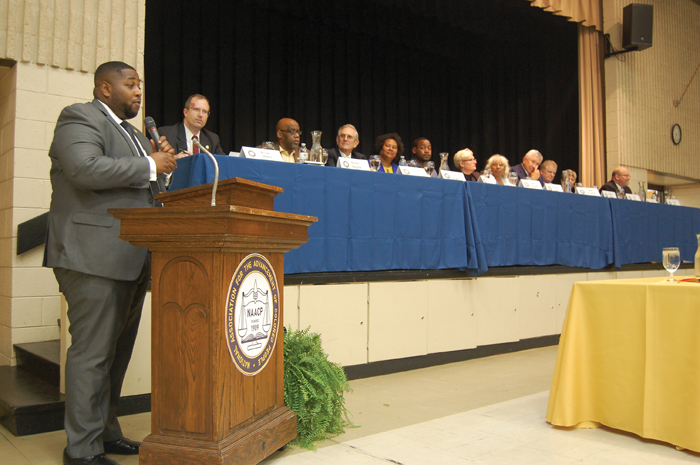 The Rev. Marcus Fairley of the NAACP opens a City Council candidates forum in Salisbury in September.

Salisbury is changing, as people pointed out Thursday during the NAACP forum for Salisbury City Council candidates. The challenge for elected leaders is to grasp these shifts and find strength in them.

In this region, the closer a community is to Charlotte, the faster it grows. Cabarrus, Iredell and Union counties all touch Mecklenburg and saw 8-13 percent increases in population from 2010 to 2016. Meanwhile, Rowan grew 1.09 percent, and Stanly County grew only .34 percent.

Young professionals just out of college are drawn to cities like Charlotte. When they decide to settle down, they often look to suburbs in the nearby counties.

Dr. Rebecca Tippett of the Carolina Population Center at UNC-Chapel Hill, pointed out Rowan County trends during a 2015 talk at Catawba College. Rowan is seeing “a bit of a youth drain in the 15-to-24 age,” she said. “The almost 1,300 whites that moved out between the ages of 20 to 24 are almost entirely counterbalanced by blacks and Hispanics moving in.

“So you’re definitely seeing a huge shift in the county’s overall racial ethnic composition that’s driven by migration. Because the people moving in, that are of young ages who have children, don’t look the same as the people that are moving out.”

Some of those trends are more pronounced in Salisbury, she said, which is consistent with settlement patterns statewide. In 2000, city and county populations were about 4 percent Hispanic. By 2010, Rowan’s Hispanic population was 7 percent, while Salisbury’s was 11 percent.

As of the last census, Salisbury has become a “majority minority” community, with a population that is 48.6 percent white, 37.7 percent African American, 11 percent Hispanic and the rest other.

“That has been a dramatic change,” Tippett said.

Salisbury is a precursor of what is to come nationwide. Demographers estimate that the United States will become a “majority-minority” nation by 2040, with white, non-Hispanics dipping to less than 50 percent of the population. The nation’s public schools are already there. So is Mecklenburg County. Salisbury needs leaders who find strength in this diversity and lead the way in making this new reality work for all.

My Turn, Vickey St. Lawrence: Here’s what I saw…