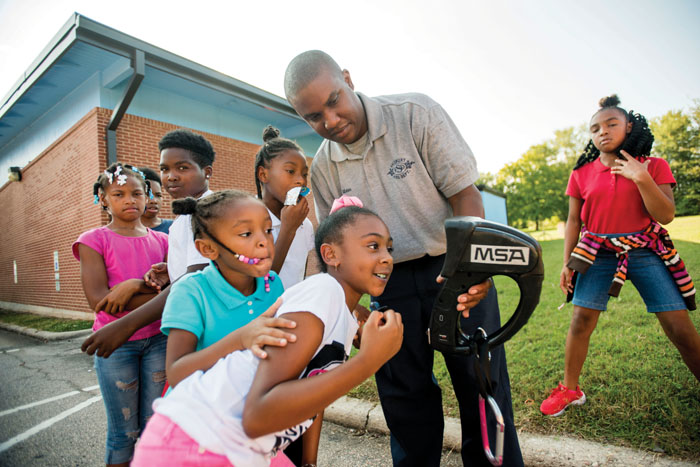 Capt. Ronald Alston lets Brooklynne Witherspoon (center) and the rest of the kids look at the Thermal Imaging Camera they use. A new program, created by 9-year-old Brooklynne Witherspoon and 10-year-old twins India and Invy Robinson, called A Bridge 4 Kids held the first meeting on Thursday at Miller Rec Center in Salisbury. Firefighters from nearby Salisbury Fire Station 3 brought over their Quint apparatus to the meeting to let the kids get a closer look and ask questions. Jon C. Lakey/Salisbury Post

SALISBURY — Brooklynne Witherspoon cried for the first time at a funeral when a cousin, 7-year-old A’yanna Allen, was murdered.

And she was moved to act in the wake of the senseless violence that took the young girl’s life. Nine months later, the Overton Elementary School student has created a community program for youth.

Brooklynne, who is 9, brought aboard longtime friends and twin sisters Invy and India Robinson, 10, to bring her dream to fruition. Invy and India were also cousins of A’yanna Allen. They attend Koontz Elementary School, where A’yanna was a student as well.

A’yanna was killed in December while she slept in the bedroom she was sharing with her grandmother, Shirley Robinson. Robinson was struck in the leg. The young girl’s murder has not been solved.

The girls have expanded on a few key initiatives they felt they could tackle to help the community come face-to-face with issues such as violence and teaching youth life skills.

The program, A Bridge 4 Kids, is geared toward youth in kindergarten through 12th grade. Meetings will be held in the evening hours.

The girls didn’t necessarily want to create a program to replace after-school programs but to add a resource for youths to learn skills that will prepare them for life, said Sharon Johnson, who is Brooklynne’s grandmother. Brooklynne asked her grandmother to be her mentor and guide her through setting up the program. Johnson at one time headed Salisbury’s drill team.

Johnson is pleased with the girls’ work thus far, saying she wants them to be able to understand what’s going on in their community.

“We are trying to get kids out of the streets. We don’t want them to be a follower but be a leader,” Invy said.

“We want them to be able to get a job instead of fight,” India said.

The free program is run entirely by the three girls, with guidance from area volunteers who have connections in the community, including North Hills Christian School coach Talita McCain.

“Anything that is going to help the community, especially the children, I will make time for,” McCain said.

McCain said she thought the idea the girls had was unique because they “recognized there were some issues and wanted to do something about it instead of complain.”

A’yanna Allen’s death hit home for the girls and inspired them to start the program, McCain said.

“There’s issues everywhere. Salisbury has been plagued by a lot of crime recently. It’s about building a bridge between the community and law enforcement and between families,” she said.

She said programs like this can help reach youths at an earlier age to build relationships and discover what resources are available to avoid problems.

“I think it’s great for some 9-year-olds to sit down and come up with a plan on their own and a goal they want to accomplish and outline those steps. I think it’s exceptional and phenomenal to me,” McCain said.

She hopes the idea will inspire others to do similar work in the community.

“They have great ideas, and once they are fully developed and come to fruition it will be a great program,” she said.

Participation in the program requires a referral by a local school, a parent, or community services through the Department of Juvenile Justice. There is space for 50 children in each group who will have a set of rules and consequences in each phase of the program. An application is required from each child, and they will write their own contracts that must be followed.

India said she wants to be able to dig into why students are getting into trouble at school, and she hopes the program will be a good outlet for them.

Invy said what inspired her to help create the program is hearing so much about all the recent shootings.

“Sisters, brothers and parents and cousins are crying. They need to stop the violence,” Invy said. She added that if the violence ends, “Salisbury would be a better home for everybody.”

Brooklynne would also like to focus on teaching youths some skills that she believes are not taught in the school system, such as cursive handwriting and how to do well on a job interview.

All three girls said they want interaction between youths and police officers and firefighters to be positive. That’s why they felt it was important to include information on how to respond to police or others in authority in the program.

A group of 10 children met Thursday at Miller Recreation Center and will meet regularly from 5 to 6 p.m. Tuesdays and Thursdays.

The three stages of the program are:

The first stage is primarily about teaching children how to interact with police officers, firefighters and others in a position of authority. Children also will learn about what to do in an emergency situation.

This stage offers resources for local jobs and other activities that will help keep children out of trouble and give them something positive and productive to do.

This stage offers job interview techniques and how to dress and act in certain settings including court appearances and interviews. Participants will be taught how to open a bank account, budget and learn credit awareness. Youths will also learn about the importance of reading documents and knowing what they are signing. This stage will either include new members or those who have graduated from previous stages.

Each program completion is followed by a ceremony where participants can choose to go on to the next stage or decide to leave the program.

“It’s just inspirational to see children so young already thinking about solutions and trying to be a part of the solution. They want to reinforce unity in the community,” McCain said.

A Bridge 4 Kids will also teach youths about resume writing, etiquette, public speaking and general keys to success in life.

Eventually, the girls would like to rent a building for the program, create “blessing bags” for the home and add a food pantry for families who may need extra help with food.