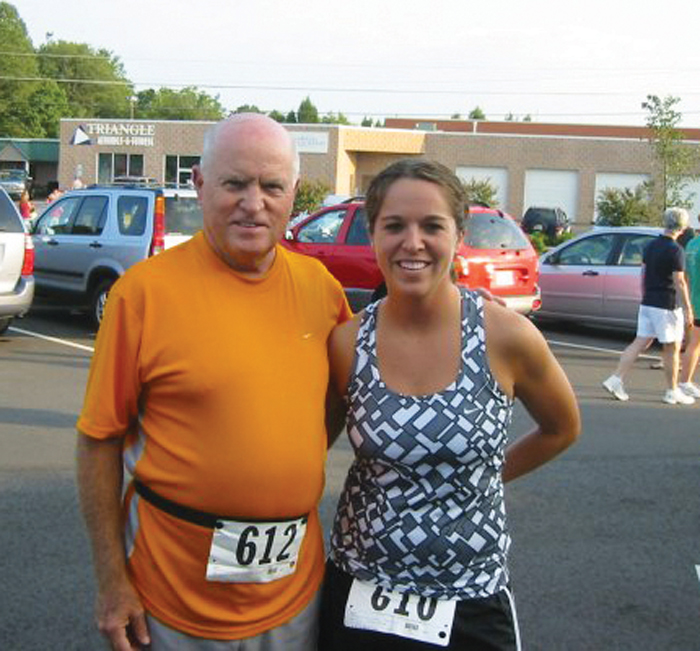 Ed Dupree and daughter Allison after one of their many races.

I can’t remember the time that I first met Ed Dupree. It was probably at a race years ago. Ed worked at the Post for 35 years, five of those as sports editor. While knowledgeable in virtually every local sport, Ed found ways to write about running, something that wasn’t all that common back then. An excellent golfer too, Ed certainly challenged himself long-term. He has played 565 North Carolina courses, which he’s been told is a record. That leaves 31 left to play, which would make 596. There are actually only 552 courses in the state because 43 of the ones he played no longer exist. The following column is an update on two of Ed’s most serious challenges.

Ed liked running so much that he didn’t want to miss a day. He said, “When I started my streak on June 23, 1993, I didn’t realize I was in it for the long haul. I really didn’t think about it being a streak until I had made about a month. I probably got serious about it several years later when I found out in articles in the Salisbury Post and Charlotte Observer that there was actually a national organization, which I soon joined.”

As the years went by, Ed kept moving mountains to keep the streak alive and eventually ran in all 100 NC counties. He ran at least a mile a day, every day. About six years ago, Ed began to experience an unrelenting feeling of fatigue. Diagnosed with Myelodysplastic Syndrome, he learned that something had gone wrong in his bone marrow and his red blood count had fallen dramatically. Doctors said that Ed’s physical conditioning helped him handle the disease along with regular injections.

I wrote about Ed’s streak of running every day twice, the previous time being when the disease was discovered. Now, it’s time to write again. Ed has known that eventually MDS could become leukemia and in July, he learned that it had. But still Ed ran, until 12 days ago. He said, “Last Tuesday, September 12, was the last day of my streak. The streak actually should have ended a couple of days earlier. After I hurt my left leg in the house, I stubbornly ran that Monday night and the next night. I finally went to the doctor on Sept.13 and found out how bad the injury actually was. It didn’t happen while I was running, but I am sure it was running related, since I have had hamstring problems over the years and have been too lazy to stretch.”

“I’m sure that leukemia, which was diagnosed in July, would have eventually stopped my streak. I actually hurt myself taking a step upward in the house and should have stepped with the right leg. The injury appears to be where the hamstring attaches to the gluteus — or at least it is in that area. It was recommended that I not run for at least two weeks, but I will probably rest it for at least a month. I’m sure the leukemia would have stopped me eventually, but I was doing fairly well with a slow mile every day.”

Daughter Allison said, “I think dad is disappointed and maybe relieved with his streak ending.  I think he’s glad it was injury and not the leukemia that made him stop – he’ll hang in there and get back at it!”

Ed added, “I definitely have no desire — if I heal my injury — to ever start another streak. I might run 4 or 5 days a week. I would never have expected to be ranked 82nd out of 563 runners in the United States Running Streak Association at the time my streak ended. I am proud of what I accomplished, running a mile or more every day for 24 years and 82 days (8847 days). It took a lot of motivation, especially on days when I really wasn’t in the mood to run.”

Friend, running and golfing partner, Wayne Crowder said, “I think Ed did more than he realizes to inspire many people, including me, to start and continue a running program. His numerous articles on local runners and races made you want to be a part of it. I am fortunate to have done many memorable training runs and marathons with him.” Dupree founded and coached the Faith Flyers from 1974-86, helping many of the best youth runners of that period find tremendous success.

There are plenty of humorous stories of how Dupree continued the streak, including the time that he moved all the motel room furniture to the center and ran his mile around the walls. With that determination, look for Ed to be back on the roads or the YMCA track soon!