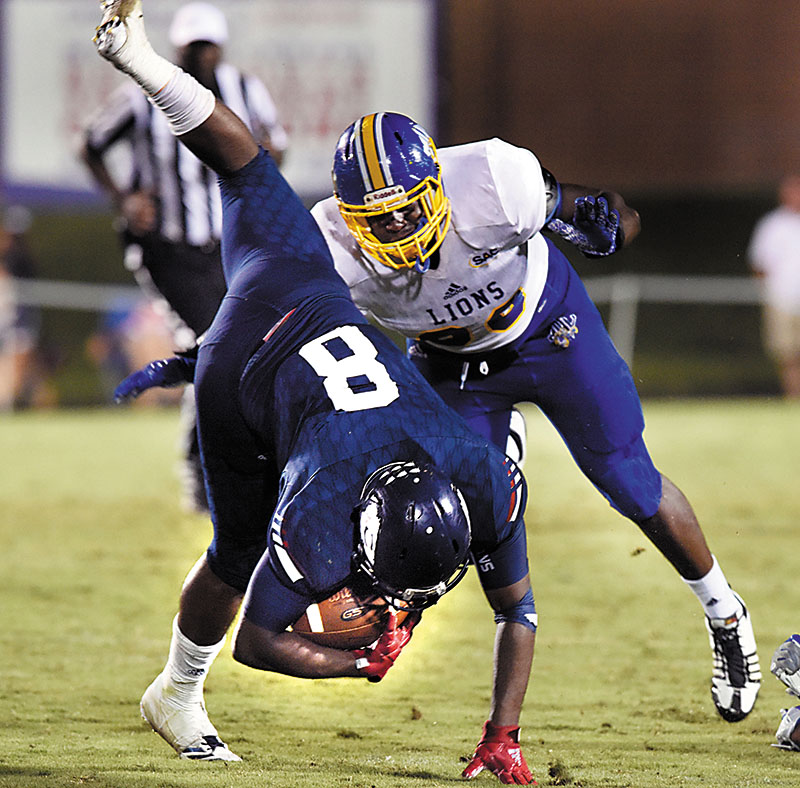 SALISBURY — There was a lot of brilliant going on Saturday night at Shuford Stadium — and none of it had to do with a post-game fireworks display.

Instead, it had everything to do with Catawba’s unbeaten football team and the 37-13 hammer it laid down on visiting Mars Hill in its South Atlantic Conference opener.

“It’s a good feeling to beat one of the best in our conference first time out,” quarterback Patrick O’Brien said after the 25th-ranked Indians (4-0 overall) earned a prescription-strength victory. “We didn’t want to be looking at an uphill battle. The truth is, we expect to win every game. If we all execute and do our jobs, nobody can stop us. The only time we stop is when we stop ourselves.”

So far slowing Catawba for four quarters is a test no one has passed. And against Mars Hill (2-2, 1-1) — a league-title contender — the Indians won with diligence, determination and a handful of spectacular performances.

“We knew Mars Hill would be the toughest team we’ve faced,” said winning coach Curtis Walker. “So they went out and challenged themselves and dug deeper. The difference in the game was our second half. We made plays instead letting them make plays.”

Catawba sledded behind an inspired offensive line and scored three second-half touchdowns — two by junior speedster Kenyatta Greene and another by bruiser Eamon Smart — to salt the game away. Meanwhile, its defense forced five turnovers and pitched a second-half shutout, limiting the guests to 130 total yards after halftime.

“We call our defense ‘The Villains,'” linebacker Kyle Kitchens said after sacking Mars Hill quarterback David Salmon three times. “There’s a whole list, but we’ve got the Joker (DB Jeremy Addison), the Black Goblin (linebacker L.J. Melvin) and Mr. Freezer (LB Trey Evans). We came up with them before the season and just started having fun with everything.”

Right there you have a snapshot of just how joyful this victory was. “Every game is like this,” Greene said after rushing for 90 yards on just eight carries. “We’re excited because we’re winning and everybody’s getting involved. Everybody’s part of a good team that’s trying to get better.”

Catawba is 4-0 for the first time in a decade because O’Brien played with tact and composure, completing 16 of 29 passes for 214 yards and two touchdowns. And because Smart punctured the Mars Hill defense for a career-best 147 yards on a career-best 30 attempts. And of course, because its offensive line provided secret-service protection and opened holes wide enough to drive the team bus through.

“I always tell those guys to play hard and take what the defense gives you,” said first-year OL coach Nygel Pearson. “I appreciate what they did for the team tonight. It’s always a luxury to have two backs like we do — one who pounds people and one who runs past people.”

Catawba trailed 7-3 late in the opening quarter when O’Brien and top-flight receiver Sam Mobley connected on a 62-yard touchdown play. “They went one-on-one on the backside against Sam,” O’Brien said. “With no linebacker on him, he just ran a little 10-yard hitch, almost like a layup in basketball. I just hit him. He did all the work.”

It was 17-13 at the half after Salmon hoisted a 46-yard, Hail Mary TD pass to Keshaun Taylor as the clock expired. “We stay undefeated, but we gave up too many long balls,” said cornerback Cris Page. “On that last play (of the half), he just wanted it more. I was right there. I just didn’t grab it.”

Page — who intercepted two passes in last week’s lopsided win at UNC-Pembroke — more than made up for it by recovering a first-quarter fumble and picking off a pass in the third. “The linebackers and D-line brought out our Catawba defense,” he said with a Cheshire-cat smile afterward.

Greene took over in the third period, scoring on TD runs of 28 and 29 yards as Catawba’s lead bulged to 31-13. He followed 280-pound pulling guard Quinzavious Sands on both plays. Smart closed the scoring when he took a handoff and went off-tackle to the left side on a 13-yard burst with 6:44 to play.

“You’ve got to take them one game at a time,” Smart said after posting his third 100-yard game of the season. “We know that, but we’re doing it and it feels awesome. Everyone is digging deep on every play.”

NOTES: Mars Hill running back Malik Prescott rushed for 107 yards, but the Lions were outgained 251-99 on the ground. Salmon passed for 294 yards and two scores and was sacked four times. … The Indians converted eight of 14 third-down chances and their only fourth-down attempt. … Mobley made five receptions for 106 yards and scored his team-leading fifth touchdown. Page, Mike Miller and Cedric Gervin intercepted passes for Catawba. Page and Addison recovered fumbles. … Catawba visits Carson-Newman next Saturday afternoon.