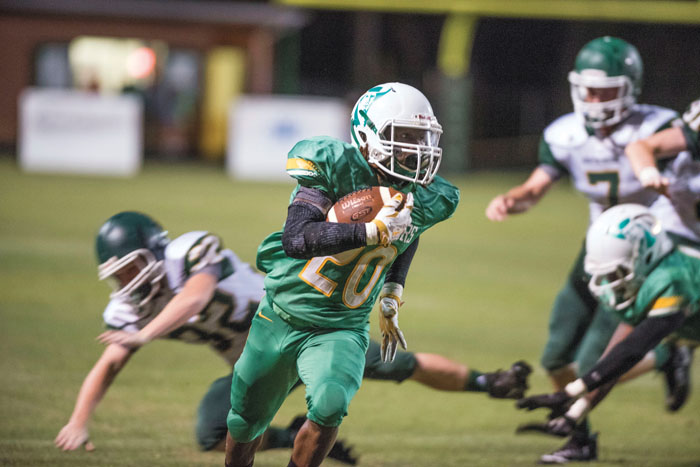 SPENCER — North Rowan is a lot more talented than North Moore, and even when the Cavaliers turned an offensive snap into a circus, they got six points on a broken play.

North Rowan QB Willis Mitchell fumbled a shotgun snap in the wrong direction, knocked it around, finally scooped the ball up while running for his life, and then winged a pass that was more of a hope then a rope toward the end zone. That’s when Stanton Bailey suddenly came into the picture, and he made a fine diving catch for a touchdown.

“I fumbled it around, but there still wasn’t that much pressure on me, and I could see that my receiver was open,” Mitchell said.

North Rowan coach Ben Hampton wasn’t sure whether to laugh or cry about North’s biggest offensive play. That something-out-of-nothing scramble by Mitchell broke a 7-all tie in the second quarter and put the Cavaliers (4-1, 1-0 Yadkin Valley Conference) on the road to a 54-7 blowout.

“You’d kind of like to do it without the fumbling around, but the best thing about that play was Mitchell kept his eyes downfield,” Hampton said. “That play could’ve completely collapsed, but we got something good out of it. And it was big for Bailey. He’s one of the receivers we want to get going.”

Mitchell threw for 186 yards and three touchdowns and also ran for a score. Jaleel Webster had 115 yards on only 10 carries and had eye-popping, consecutive runs of 23, 28 and 36 yards in the second  half.  Emerging receiver Quintous Smith Jr. had four catches for 99 yards and two TDs and he also reeled in a 2-point conversion flip from Mitchell. Malcolm Wilson contributed two TD runs.

Defensively, lineman Matthew Hoosier and linebacker Tyzai Lyles were terrors. They had four tackles for loss apiece in the first half. A dozen North Moore running plays in the first half gained nothing or went flying backwards. After a while, it was considered a positive play for North Moore if everyone finished it healthy.

North Moore (1-4, 0-1 YVC) knew it couldn’t match North Rowan’s speed or size, so it tried the only game plan that made sense. Shorten the game. You could’ve taken a nap betweens snaps in the first half, and North Moore stayed calm and poised and stayed in the game longer than expected.

North Moore pushed to the North Rowan 33 before being stopped on downs  on its first possession. Then North Rowan went three-and-out before Jacob Young launched a 44-yard punt. Those would be the only snaps the Cavaliers’ offense had in the first quarter.

“Hoosier and all our guys up front were playing great and creating gaps,” Lyles said. “All I had to was make the tackles.”

When North Moore dropped  into punt formation on fourth-and-6 from its 24-yard line, Hampton was thinking block.

“We’ve got so many athletes on special teams,” Hampton said. “We thought we could go get one.”

Cornerback Terran Smith was the one who went and got the punt. He blocked it fearlessly, and freshman teammate Xzavier Davis made the scoop-and-score.

“The punter was just slow getting the kick away,” Smith said. “I came off the edge and got it. I didn’t see where the ball went right away, but then I saw Davis was running with it.”

Young’s PAT made it 7-0, but North Moore didn’t panic over that special-teams disaster and stuck with the plan.

On fourth-and-long, North Moore faked a punt and hit a 25-yard pass play to reach the North Rowan 25. On fourth-and-4 at the North Rowan 7, North Moore coach Mike Vogt sent in his field-goal unit. The holder was quarterback J.J. Person, and he fooled the Cavaliers by standing up and tossing an easy TD pass to a wide-open receiver. Then the PAT kick made it 7-all early in the second quarter, and North Rowan fans were starting to squirm in their seats.

“We were going to try to block the field goal,” Hampton said. “And they fooled us. We had outside guys with the responsibility to cover the eligible receivers, but we didn’t get it done.”

That surprise North Moore TD served as a wakeup call for the Cavaliers. They scored three touchdowns in the last seven minutes of the second quarter to take a 27-7 lead to the break.

There was the Mitchell-to-Bailey touchdown for 13-7. Wilson scored easily skirting right end after taking a pitch from Mitchell, and the backbreaker came when Mitchell hit Quintous Smith Jr. with a pass and he made startled defenders look like statues as he sped for a 46-yard score with 42 seconds left in the first half.

North Rowan had so few offensive snaps in the first half that Webster wasn’t a factor, but he went crashing through arm-tackling defenders for a touchdown in the opening minutes of the second half, and it was 33-7.

“It seems like we’re always slow coming out,” Webster said. “But this game was  like a lot of our other games. Once we got it going, we rolled.”

A few minutes later, Lyles recovered a fumble and made a physical return to set up a touchdown.

“I heard people yelling, ‘Fumble!’, and everyone was kicking the ball around,” Lyles said. “I grabbed it and took off. Maybe I could’ve scored, but I’m not a running back.”

Lyles did take the ball to the North Moore 20. Mitchell hit Quintous Smith Jr.  again from there, and it was 40-7.

Mitchell tacked on a 20-yard scoring run of his own for a 47-7 lead late in the third quarter.

When Wilson barged into the end zone behind tackle Bryson Deal with 7:05 remaining, the Cavaliers led 54-7 and finally had the running clock they’d been looking for.

“The blocked punt was our spark,” Mitchell said. “After that, especially in the second half, we took care of business.”

Hampton will take it. It’s a conference win, although the Cavaliers didn’t scare anyone — except their fans — for the first 20 minutes or so.

“We’ve definitely been slow out of the gate more than we’d like,” the third-year coach said. “But  once we got going, we played gutsy football and we played hard-nosed. That’s even more important than having great athletes.”

North is home again next week against YVC foe South Stanly. That will be a 7 p.m. start.