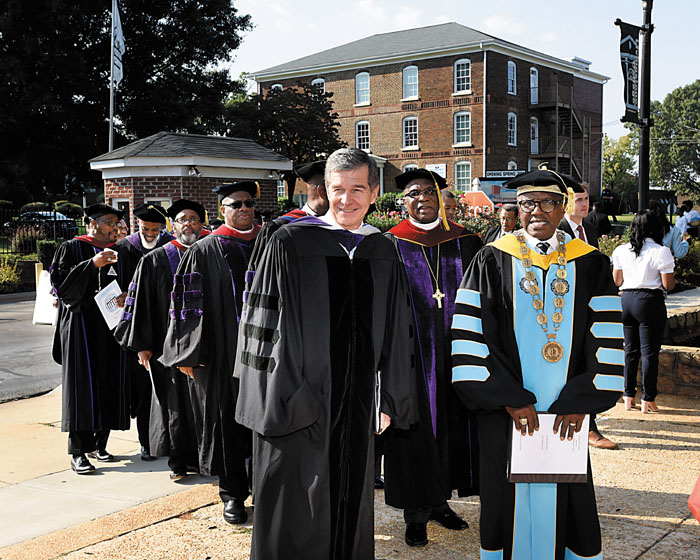 SALISBURY — Students of Livingstone College are looking to the future following a keynote speech by North Carolina Governor Roy Cooper.

Cooper, who was sworn in in January, was invited to speak at the historically black college for its 2017 Fall Convocation. The annual service serves as a “rite of passage and induction” for the incoming freshman class, Dr. State Alexander, vice president of communications and public relations said. Livingstone welcomed 361 freshman this year.

It was those students, along with the current senior Class of 2018, whom Cooper encouraged to “live a life of purpose.”

Livingstone College President Dr. Jimmy R. Jenkins, introduced Cooper, and commended him for having what he called one of the most diverse cabinets in state history.

“These are exciting and historic times in North Carolina,” Jenkins said.

Cooper opened his speech with the concept of “unbuntu,” a bantu word for togetherness and community. The governor encouraged students to devote themselves to a life intimately connected with the lives of others.

“None of us comes into the world fully formed. We would not know how to think, or walk, or speak, or behave as human beings unless we learned it from other human beings. We need other human beings in order to be human. I am because other people are,” Cooper said, quoting Rev. Desmond Tutu.

Cooper used his own life as an illustration for the concept, describing how he saw the way hard work and compassion could impact others as a boy growing up in Nash County. He said he constantly saw people in his community working to help others, and to help improve the life of the community for the better. That included the dedication his own parents had to public service as a teacher and a lawyer-farmer.

“I saw how my parents changed the arc of people’s lives,” he said.

And it inspired him to do the same.

As Governor, Cooper said, he wants to work together with others to solve big problems such as closing income and achievement gaps. Through collaboration, he said he hopes to turn a “me first” society into one where people help each other. And he hoped Livingstone’s students would follow suit.

To “live a life of purpose,” students should keep in mind a few key concepts. They should: be involved in a cause greater than themselves, learn from loss, take a “long view” of the future, read, be nice to others and explore their faith.

“Nevertheless, I am optimistic because of young people like you,” he said.

Following his speech, the Livingstone College Board of Trustees awarded him the President’s Award, the highest honor of the college, and conferred upon him the honorary degree “Doctor of Humane Letters.” Dr. Richard Rolle, Jr. an oral surgeon who has worked for the Charlotte Hornets, Checkers, 49ers and Hounds, was also awarded the honorary degree.

Before students were dismissed, Jenkins encouraged them to “light a candle rather than curse the darkness.”

This year, Livingstone and other historically black colleges and universities are also celebrating the 125th anniversary of black college football, a tradition which began at Livingstone.