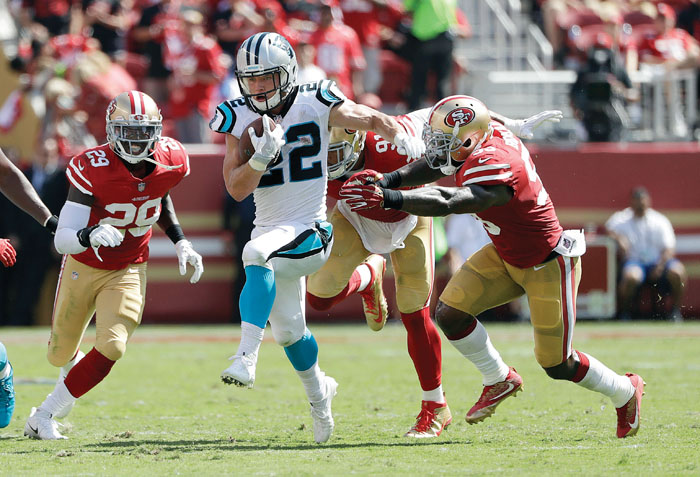 FILE - In this Sunday, Sept. 10, 2017, file photo, Carolina Panthers running back Christian McCaffrey (22) runs against the San Francisco 49ers during the first half of an NFL football game in Santa Clara, Calif. McCaffrey and New Orleans’ Alvin Kamara are in the infant stages of NFL careers that could very well run along parallel tracks in the same division for years to come. Their convergence off their pro football paths comes into focus on Sunday, when the Saints visit the Panthers in NFC South play. (AP Photo/Marcio Jose Sanchez, File)

METAIRIE, La. (AP) — Carolina’s Christian McCaffrey and New Orleans’ Alvin Kamara are in the infancy of NFL careers that are set to run along similar tracks in the same division for years to come.

The convergence of the running backs’ paths comes into focus Sunday, when the Saints visit the Panthers in NFC South play.

“There are a lot of similarities,” Panthers coach Ron Rivera said this week. “Both have good hands — good runners, good vision, cutback ability, stuff like that.”

Oddly, they were rarely, if ever, mentioned in the same sentence during their college careers, which bore little resemblance to one another.

McCaffrey was widely regarded as Stanford’s most outstanding player — so much so that he skipped the Cardinal’s bowl game last season with the aim of ensuring he was in the best possible physical condition for the NFL draft. Carolina drafted him in the first round, eighth overall.

“He’s a big play waiting to happen,” Kamara said. “He’s fast. He’s got good feet, agile, versatile. He makes things happen when he has the ball.”

Kamara’s college career was a bit lower profile. It began at Alabama, where his prospects for playing time were slim enough that he decided to transfer. He landed at Tennessee, where he also struggled to crack the starting lineup until his senior season, and then only because of an injury to then-teammate Jalen Hurd.

Still, both succeeded in roles during college that demonstrated potential to blossom as so-called scat backs in the NFL.

The 5-foot-11, 205-pound McCaffrey had more than 1,200 yards and 10 touchdowns receiving out of the backfield during his three-year Stanford career. The 5-10, 215-pound Kamara had 683 yards and seven TDs receiving in two seasons for Tennessee. When coach Sean Payton attended a workout for pro prospects at Tennessee, he specifically asked Kamara to run routes and catch passes. Payton like the way Kamara handled that portion of the workout, recalling that before the visit, he viewed Kamara as “an intriguing player,” adding, “but after the visit, he was a target.”

During the draft, New Orleans traded up in the third round to snag the running back.

“He can do a lot of things,” McCaffrey said of Kamara. “He’s a very talented player.”

Kamara said he never viewed himself as a scat back coming out of college.

“I just felt like I’m a running back, and I just happen to catch well,” he said.

But on a team that also has running backs Mark Ingram and Adrian Peterson on the roster, Kamara has had as significant a role as a receiver as a rusher. He’s carried eight times for 21 yards and caught seven passes for 71 yards.

McCaffrey has had considerably more carries, with 21, that catches, with nine. But he’s had more yards receiving, with 72, than his 57 yards rushing.

“He’s versatile. Obviously we’re very familiar with the player having just come out” for the draft, Payton said. “There are a handful of things that are unique to his skillset that you have seen on a limited basis in two regular season games. Nonetheless, clearly that’s something you have to prepare for.”

The good news for both defenses is that they’ve gotten used to practicing against either McCaffrey or Kamara since training camp.

Saints linebacker Alex Anzalone said McCaffrey is “very similar to Alvin,” in terms of how both teams have used their respective scat backs to this point.

McCaffrey and Kamara “have the same kind of box of plays,” Panthers linebacker Luke Keuchly said. “They can kind of line up anywhere.”

“If you’re Drew Brees, I think you’re happy to have a guy like” Kamara, Kuechly added.

Notes: Payton discussed his rationale for signing versatile defensive lineman Kendall Langford this week. Payton said signing the 6-foot-, 305-pound Langford was “more about his availability than necessarily our seeking out someone at that position.” Langford spent the past two seasons with Indianapolis, but was released in August while struggling to overcome a knee injury. He’s one of three defensive linemen added to the active roster this week, including Darryl Tapp and David Parry. Tapp was with New Orleans least season and in camp this year. Parry was brought up from the practice squad. … New Orleans also waived FB John Kuhn to make room on the roster for Langford, but could return to the roster after another corresponding move as he did earlier this season.