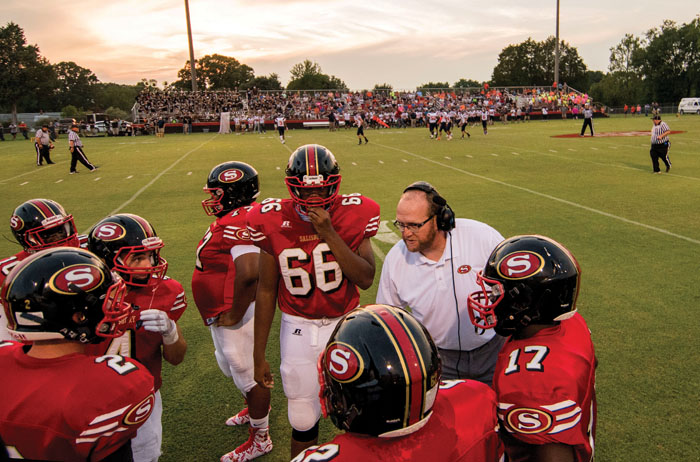 LEXINGTON — Lexington coach Chuck Henderson isn’t quite sure what he saw in his team’s Central Carolina Conference game with Salisbury Friday night at Philpott Memorial Stadium.
He’s pretty sure that whatever it was, it wasn’t typical Lexington football.
The somewhat dysfunctional Yellow Jackets couldn’t maintain any form or
focus and subsequently dropped a dispirited, 28-7 decision to the Hornets.
“To be honest, I wasn’t sure what I was seeing out there tonight,” said
Henderson, whose team dipped to 1-1 in the league, 2-2 overall. “I don’t know if it
was (lack of) focus.
“We had two weeks. I thought we had a good idea of what we would do. We
talked about the option because that’s what they (Salisbury) do well. Like I said, I
thought we had a good plan of what to do.
“But offensively, we never got into a rhythm,” said Henderson. “We get a hold
on the perimeter or something like that. We never got into Lexington football.”
Problems arose for Lexington right from the start. Forced to punt from their
own 25-yard line, Lexington punter Saafir Craven saw his punt blocked by Salisbury’s Tevan Mullenax.
The loose ball bounded into the end zone, where it was recovered by the Hornets’
Nick Austin for a touchdown.
Lexington bounced back late in the first period when Craven, on a quarterback
keeper, rolled in from five yards out for a TD to cap a short 47-yard drive that was
initially set up by a short punt by Salisbury’s Will Taylor.
But that was basically all the offense Lexington would generate the rest of the
game.

The Jackets did appear to have an opportunity early in the third quarter, but
when faced with a fourth-and- 2 at the Hornet 48, the Jackets came up just inches
short of converting.
Salisbury took the lead for keeps in the third period when quarterback Griffin
Myers found Tyrone Johnson for a 9-yard pass and a 13-7 lead with 3:45 left in the period.
The clincher came in the fourth period when Myers hit wide receiver Trell
Baker on a flare that Baker turned into an elusive 57-yard score with 7:52 left to
play.
The Jackets never recovered from that.
“We had too many turnovers,” said Henderson, noting his team gave up a lost
fumble and two interceptions. “In the second half, we just didn’t make a play. I don’t know, I guess we got tired on defense, and then we gave up that big play (to Baker). He got loose and we couldn’t get him hemmed in.”
NOTES: The Jackets rushed for 125 yards in the game, with 87 of those coming
in the second half. … Craven passed for 97 yards in 23 attempts. … Salisbury
improved to 3-0 in the CCC, 4-1 overall. … Salisbury hosts Central Davidson next Friday while Lexington travels to Ledford.