Carson rallies, but falls to Central Cabarrus in overtime 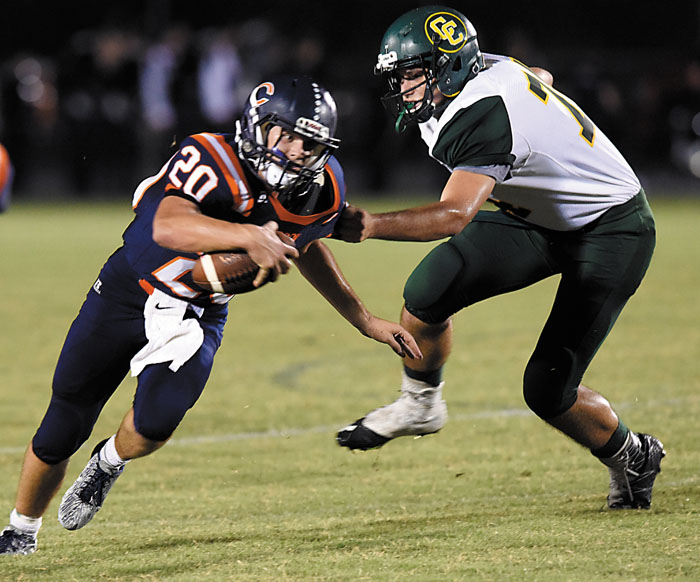 CHINA GROVE – There are no moral victories in football and Carson coach Joe Pinyan certainly wasn’t looking for one Friday night. His Cougars put together a furious rally to tie visiting Central Cabarrus late in the fourth quarter, but fell in overtime, 26-20.

“A lot of people were saying that was as good as a win,” Pinyan said of his team’s effort. “But it’s not. It still burns. It still hurts. I want to win for these guys so bad because they are a great group of players.”

Carson (1-5) battled the Vikings (3-2) on fairly even terms throughout but never could catch up until late in the fourth quarter. The Cougar defense held Central on downs at midfield, trailing 20-12. Then quarterback Josh Lee and wide receiver Jamarius Hairston went to work. Lee hit the 6-4 Hairston for 24 yards, then two plays later found him again behind two defenders in the end zone for the 28-yard TD. Lee then dove in for the two-point conversion and the score was tied at 20-20 with just 5:00 left to play.

“Jamarius is a tall tower and one of my favorite receivers,” said Lee, a running back converted to quarterback for the injured Cole Sifford. “I tried so hard to get this one but it didn’t work out.”

In the final five minutes of regulation, both teams had opportunities but big defensive plays made the difference. The Vikings fumbled at their 45, but Carson gave it right back on an interception. Central then seemed to be ready to win with a drive to the four. But on first and goal, Viking quarterback Evan McGee coughed in up at the goal with Cougar Jacob Taylor making the recovery to save the game for the moment.

In overtime, Carson had the ball first at the 10 and Lee ran it down to the two on second down, but a crucial holding call pushed it back to the 24. Lee passed to Jerry Cipres down to the nine but misfired on his next toss. A 26-yard field goal try by Juan Espinoza had the distance but was wide right.

The Vikings took just two plays in their overtime possession to end the game. Halfback Ke’Shawn Harvey capped a 130-yard rushing night with a run to the four then Derek Boykins settled it with a four-yard dive for the 26-20 win.

“We didn’t play well offensively tonight,” said Viking head coach Kenneth McClamrock, who was making his return to Rowan County after departing from East Rowan last season. “We had a lot of drops and a lot of penalties but our defense played lights out. Our kids showed a lot of fortitude by coming through in the end.”

The pass-happy Vikings went to the air early and often in the contest as McGee completed 20 of 34 passes for 241 yards and two TD passes. Harvey put the visitors on top early in the game with a 48-yard burst up the middle midway in the first quarter. Hakim Blakeney-Simmons made it 8-0 with the two-point conversion run.

Carson answered back as the second quarter opened with a 61-yard drive set up by an interception by Jailen Williams. A roughing-the-passer penalty kept the drive alive and moved the ball to the five where sophomore Hunter Courtney punched it in for the score. The two-point run failed and left Carson trailing, 8-6. Central wasted no time in responding as they drove 60 yards in just 6 plays to go up, 14-6. The score came on a clutch fourth down play at the Carson 16 when McGee found receiver Josh Faulkner in the back of the end zone.

The score stayed the same into the second half when the Lee-to-Hairston connection worked again. Facing fourth and 16 at the Viking 31, Lee lofted a high pass toward the end zone where Hairston literally out-jumped a defender for the ball at the one. “Yeah, I like plays like that,” said Hairston, a star basketball player at Carson who has proven to be a true offensive weapon for the football team. “It is like getting a rebound and catching an outlet pass.” Hairston finished the night with 106 yards on six receptions including his touchdown catch.

After Hairston’s big catch, Courtney notched his second rushing TD of the night from the one to make it 14-12. Central was able to expand the lead again late in the third period when McGee found receiver Jeremiah Taylor across the middle for a 26-yard scoring strike to make it 20-12. That set the stage for the frantic Cougar comeback in the fourth quarter.

“We just ran out of luck there at the end,” said Hairston. “But we fought hard all four quarters.”

The Cougars have lost five in a row after an opening win at South Rowan and have concluded a rugged non-conference schedule at 1-5. The team will have an open date this Friday before opening play in two weeks in the North Piedmont conference at North Iredell.

“We will try to get everybody well and back in their correct positions over the next two weeks,” Pinyan said. “Then we will go see what this North Piedmont conference really looks like.”