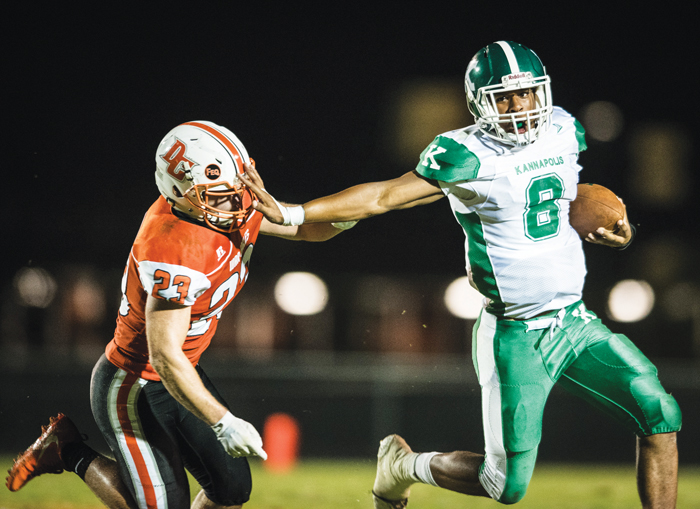 MOCKSVILLE —Cooper Wall’s return had the makings for something special last night at War Eagle Stadium. After missing the first five games while recovering from a basketball knee injury, Davie’s senior receiver went to the house on his first touch.
Visiting A.L. Brown, however, ultimately reduced Wall’s thunderous season debut to a footnote, forcing seven turnovers and scoring 23 unanswered points on the way to a 30-17 win.
The Wonders (5-1) ran their winning streak to four as they gained a measure of revenge for a 4A playoff loss at Davie last November. Davie (3-3) saw its three-game winning streak curbed in its final non-conference game.
On the second play from scrimmage, Wall caught a Josh Hall pass. Around midfield, he delivered a vicious stiff arm that sent a Wonder reeling, left his feet to cross the goal line, completing a jaw-dropping, 79-yard touchdown. Davie led, 7-0, just 32 seconds into the game.
The buzz coming in was about Brown’s ground-and-pound game — it was averaging 304 rushing yards per contest — but Davie’s front seven completely stymied Brown’s ball carriers all night. The Wonders had minus-18 yards on 29 rushing attempts.
It did not matter one bit. Brown quarterback Jordan Medley took over early and never stopped, completing 21 of 34 passes for 239 yards, including three TDs to offset interceptions by Broc Barnette and Mason Wilson.

Medley’s strikes to Jalen Nixon (10 catches for 100 yards), Justin Rodgers (4-90), Antonio Knight (4-85) and Keon McGee (3-54) compensated for Brown’s struggles on third down (3 for 13), penalties (13 for 102 yards) and frequent punts (seven).
Medley’s 67-yard hookup with Rodgers led to McGee’s 20-yard TD grab on third-and-11 to tie the game at 7-all on Brown’s first series.
Back-to-back plays resulted in interceptions in the second quarter, with Brown senior Equaris Baldwin making the second of his three picks and Broc Barnette returning the favor for Davie.
On third-and-23, Wall turned a bubble screen into 23 yards and Skyler Schoppe drilled a 33-yard field goal to give Davie a 10-7 lead with 3:13 left in the first half.
Brown caught a break with 1:49 left in the half. A low snap sent punter Barnette to his knee, and he was immediately whistled down at the Davie 17. Brown cashed in the short field to take a 14-10 halftime lead.
Davie failed to take advantage of Wilson’s interception in the first two minutes of the third quarter. Brown’s Brian Gutierrez converted a 22-yard field goal to bump the margin to 17-10.
Hall looked for Wall on a fade and Brown’s Jaran Young intercepted at the Davie 42. The turnovers were out of a character for a Davie team that had been dominating that department during its winning streak.
Medley sneaked in from the 2-yard line to push Brown’s lead to 24-10.
Brown was controlling field position throughout the second half, taking over at the Davie 40 after a short punt and scoring on Medley’s 30-yard pass to Knight. It was now out of reach at 30-10 with 11:21 to play.
Davie had a turnover on downs at the Brown 11-yard line, but the War Eagles kept battling. Kinston Whitener blocked a punt to set the War Eagles up at the Brown 19, and on fourth-and-9, Wilson laid out and kept his toes in bounds for an 18-yard touchdown grab.
But only 4:52 remained and Brown recovered the ensuing onside kick, salting the game away.
Davie only managed 28 rushing yards. Hall went 16-of-39 for 271 yards and two TDs. After a four-catch, 132-yard first half, Wall settled for five catches for 140 yards — not nearly enough on a night when Davie had more turnovers in one game than it had in five previous games combined.
Wall, Davie’s career receptions leader, had his ninth 100-yard receiving game, two from the school record. He surged to second in career receiving yards (2,530).
With an open date next Friday, Davie has two weeks to prepare for its Central Piedmont Conference opener against R.J.Reynolds.